On December 14th, 2016 President-Elect Donald Trump met with the industry leaders of Silicon Valley at Trump Tower in New York.  Seated around the table were the familiar faces of tech giants including Eric Schmidt, Larry Page, Tim Cook, Jeff Bezos, Elon Musk, Sheryl Sandberg, Peter Theil; but seated directly across from Mr. Trump was a relatively unknown 49 year Ph.D. named Alex Karp.  Unlike the household company names like Google, Apple, Amazon, Tesla and Facebook; Karp runs a private firm that has quietly grown into a $20 Billion behemoth on the back of “Big Data Analytics.”  His position at the table was no accident either.  Peter Theil, an early Trump supporter, helped found and fund Palantir in 2004 and remains the Chairman of Board.

Palantir was born from an idea in 2003, that technology and a start-up mentality could assist the US government combat terrorism in the wake of the 2001 attacks.  After securing a small round of funding from In-Q-Tel, the CIA venture arm, Palantir went about pitching the US intelligence community of the practicality of their product.

Early adopters of the software included the CIA’s Counter Terrorism Center, the DoD’s Special Operations Command and Joint-IED-Defeat-Organization.  Through success cases with these organizations, Palantir went on to expand into non-defense and intelligence clients that included the IRS, Department of Homeland Security, NY and LA police departments and JP Morgan Chase.

What Does Palantir Do:

Given its size and growing public awareness, much has been written about Palantir and its seemingly uncheck power to process information.  However, despite the sometimes-misplaced apprehensions, the concept of Palantir’s products are less complicated than some would have the public believe.

From the beginning, Palantir believed that computation was meant to augment human analysis, not replace it.  Its focus has been to enable real time query of all available data without tying down a user to onerous searches or lengthy coding exercises.

To achieve this, Palantir claims its platform does the following 4 tasks-

The most important feature of Palantir’s products are the ability to synthesize and compare an organization’s underlying data sources without needing to transfer them into a single language or repository.  While the engineering behind this feat is complicated, the concept isn’t.  Instead of ingesting, translating, and storing information in a structured manner (the traditional rows and columns of any table), Palantir interprets information into an ‘object based model’.

Palantir’s object model relies on its ‘Dynamic Ontology.’  Meaning that for any sets of information, Palantir’s engineers work with the end user to define what information represents a thing, place, or event; instead of hard coding these characteristics in its generic product.  From this basic structure the additional descriptions and enrichment information can be categorized for each object.  What results is the ability of Palantir’s software to discover and surface ‘relationships’ between data, regardless of its format. 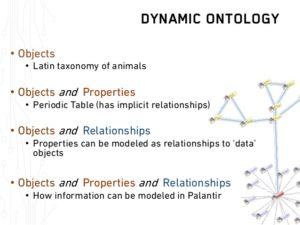 The most well-known feature of Palantir’s products is the user interface, which enables search and discovery.  Through the interface, non-technical analysts can query anything from bank records to images from an aircraft in real time to see underlying connections.  Depending on the information or task, analysts can visually investigate data in histograms, geographic overlays or spider web looking link analyses. 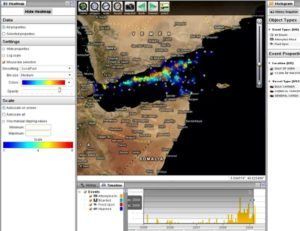 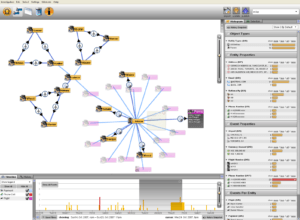 Due in large part to their origins working with the intelligence community and military, handling classified information, Palantir built into all its products a sophisticated means of regulating what information can be searched by individual user, as well as an unalterable audit trail of what information was seen, manipulated, or transferred by any individual analyst.  Palantir has claimed that in addition to enabling information security for their clients, this feature also enables an unbreakable barrier against civil liberty infractions. 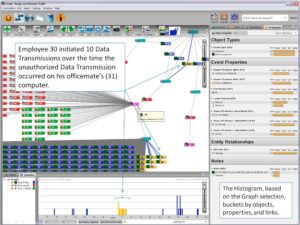 Giving the power of Palantir’s platform to one analyst is powerful.  Connecting a team of analysts around the world to each other’s work and data sources (as allowed through the knowledge management) is game changing.  Through Palantir’s products, individual users create and publish their analysis to a broad network, enabling other users to build off their work and collaborate on investigations.

In 2015, Palantir closed an 880mm round of funding at a reported $20B valuation.  Information on Palantir’s internal finances have never been shared, but it has been reported that Palantir is cash-flow positive.  Recent forays into the commercial space of financial and legal services have seemed to calm investors apprehensions that Palantir is a niche government player, showing an ability to find growth and adoption for its products.  What remains to be seen is whether the human capital intensive nature of its product will be scalable with its ambitions.