NVIDIA is the Intel of graphics processing units (GPUs). It designs and markets chips specially designed to render images and manipulate graphics on display devices, and some 200 million gamers around the world use NVIDIA’s products. The firm’s GeForce line is the crème de la crème of triple-A gaming technology, and the brand is synonymous with performance and reliability. I am clearly a fan of NVIDIA.

As the gaming ecosystem evolves, Jen-Hsun Huang, NVIDIA’s CEO, faces a tough challenge: remaining relevant in a world that “will increasingly be expanded by virtual realities.” Despite some progress by players like Oculus and Google, that world is still largely unexplored, and every software and hardware player in the gaming market is eager to claim market share in what could be a $40 billion opportunity by 2020. 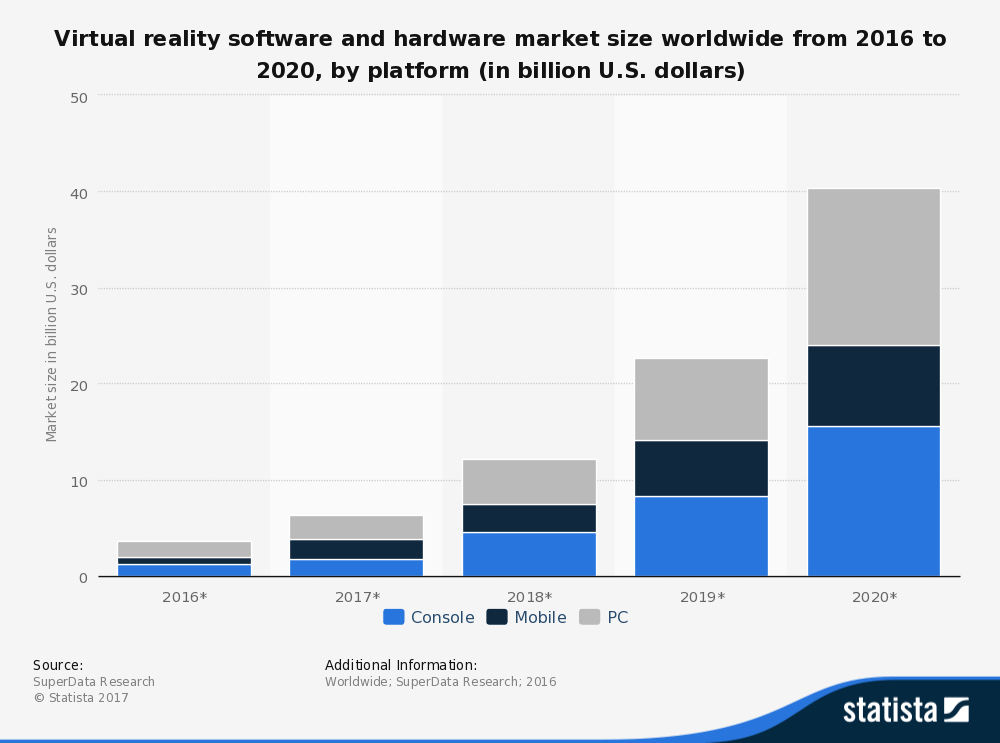 NVIDIA could pursue one of any number of growth paths, but its choice is non-trivial. There is no guarantee that discrete GPUs will remain a core component of future VR technologies. For evidence, consider the rise of Intel as a microprocessor manufacturing powerhouse. Memories were thought to be the cornerstone of computing prior to Intel’s introduction of the CPU, but the initially slow, general purpose CPU rapidly supplanted DRAM memory in the value chain. It is not far-fetched to believe something similar could happen to NVIDIA in the VR hardware space.

NVIDIA’s efforts to build hype, and perhaps dependence, in the VR market have been largely parallel to its traditional 2D gaming efforts. The Oculus Rift, for example, requires a powerful video card to deliver an optimal user experience. A gamer can simply plug the Rift into her existing gaming PC equipped with a GeForce card. Relatedly, NVIDIA published a collection of mini-games titled “VR Funhouse” to showcase the capabilities of its GPUs in VR, and it also released a software development kit, VRWorks, to support third-party game development.

Are these just gimmicks? At a surface level, it might seem that way, though I believe these efforts represent NVIDIA’s best attempt to shape the direction of VR. Despite having been in the gaming business for over two decades, Funhouse was NVIDIA’s first published game, and VRWorks supports GeForce-optimized game development. In these regards, the company seems to be shifting its capabilities away from its historical base to capitalize on VR opportunities in hardware and software. The firm’s march along its own Moore’s Law path means it’s conceivable a VR-ready mobile GPU will be on the market in the next five to ten years because of organic R&D efforts. However, it is a mistake for NVIDIA to bet primarily on the “tethered” gaming experience to capture VR market share. While such a strategy could grow its topline in the short-run, it may be a doomed-like-Nokia strategy in the longer term in the event value shifts substantially away from the GPU-enabled head mounted display (HMD) and to another spot in the VR ecosystem (e.g., haptics, all-in-one HMD, mobile device-enabled HMD, or software like social VR experiences).

NVIDIA’s R&D capabilities are considerable: it plows over 20% of revenues into R&D and employs 7,282 full-time employees dedicated to R&D. With $6.7 billion in cash and short term marketable securities on its balance sheet, the firm is more than capable of quickly snatching up new VR entrants. NVIDIA should be able to carve out a spot in VR with these resources, but It’s unrealistic to expect it to position itself as a vertically integrated player. It is, however, entirely feasible that the firm can capture substantial value at the edges of VR systems. Intel’s approach with the internet of things is similar: it hopes to build cheap sensors that feed data into Intel-equipped, high-margin data centers. NVIDIA, via its Iray technology, could do something similar with pre-rendered VR spaces, equipping HMDs with cheap GPUs while performing heavy duty backend computing. Overall, NVIDIA looks to be on the right track to remain a strong competitor in VR, and I look forward to seeing how the company shapes the VR universe.

Student comments on NVIDIA: The future Nokia of PC gaming?