NVIDIA, the publicly traded (NVDA) producer of graphic chips was little known to anyone, until 2016 when it became the best performing stock, delivering over 207% returns to its shareholders. Today with market cap of almost $150bn it is hard to ignore. 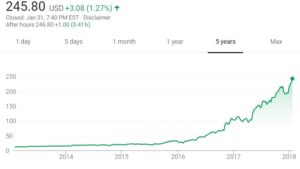 Nvidia was founded in 1990 in California by three engineers: Jensen Huang, Chris Malachowsky and Curtis Priem, who saw a market opportunity to create superior graphic chips. With no real sense of mainstream demand for the product, the company focused on the area of computing with highest graphic processing requirements, i.e. video gaming. Formed with $40,000 of initial funding, the company had a single mission – to create the most efficient graphic chip in the market. Throughout the years, NVIDIA delivered on its promise either by developing the best chip internally or by acquiring its competition. Unfortunately, it never managed to keep the market leadership as competition, particularly those with large balance sheet like Intel, was quick to make copycats.

But, Huang always knew that his product had a much wider application than just video games. As such, he continued to take big bets with the hope to create the most powerful chip ever, with the hopes that someone will find a way to fully utilize it. Many years and millions spent later, the strategy paid off. The company developed its most powerful product yet – the CUDA GPU chip.  Incidentally, it turned out that CUDA was not only valuable to create state of art screen explosions, but also to be the only chip that can power the most promising area of artificial intelligence – deep learning.

Today, NVIDIA’s chips are everywhere. They power data centers of the tech giants like Google, Facebook, Amazon and Microsoft. Tesla is planning on using Nvidia’s product in all its car models to enable autonomous driving. Equally, some of the 3000 AI startups are all run on Nvidia’s chips. The current most powerful $130,000 AI super-machine, the DGX-1, is run on 8 of NVIDIAs latest server chips.

Nvidia is on top of its rivals also on attributes outside of product superiority, mainly its work environment. The Company’s flexible vacation time policy, stress management programs and above industry pay recently placed it in the top 10 companies on Just100 ranking. This, combined with a mission driven culture to become the enabler of true AI potential has attracted some of the top engineers in the industry, making it even harder for the competition.

The competition (Intel, AMD and the likes) is trying to play catch up, but today no one is bettered positioned to ride the data explosion wave driven by progress in artificial intelligence applications. With its current 70% GPU market share, it has an immense first mover advantage. In addition, given its culture of consistently delivering state-of-art technology, I believe the company is well positioned to sustain its double-digit growth and maintain its market leadership, even if by another stroke of luck.

Making Lemonade out of Insurance Lemons

Student comments on Nvidia – a #winner by choice or by stroke of luck?