Remember trading Pokemon cards with your friends on the playground in the 90s, or sitting in your elementary school cafeteria collecting these mythical creatures? We’ve all grown up and entered the 21st century – and so has Pokemon! 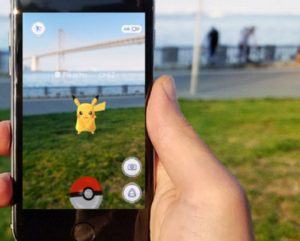 Niantic Labs, a software development company founded in 2010 with the express purpose of focusing on augmented reality, brought our childhood dreams to fruition. The company was originally founded as a part of Google, but spun out in 2015 after raising $25 million from Nintendo. Niantic launched Pokemon Go in the summer of 2016, after developing the product for over two years in conjunction with Nintendo. The product, which encourages users to use the app to spot Pokemon in the wilds of their own surroundings, uses augmented reality to overlay the animated creatures onto your current setting by using a mobile device.

The product was an overnight success in the most literal form: the app was most downloaded application on the iOS app store and the Google Play Store within a few days, and generated over 500 million downloads within the first 90 days. More impressive, in the 6 months since the application launched until the end of 2016, Pokemon Go generated almost $950 million for the company. It was 6x faster to grow to the $600 million revenue mark than its closest rival: King Digital’s CandyCrush Saga, which took 200 days versus Niantic’s 90 days. The growth numbers were staggering for Pokemon Go. 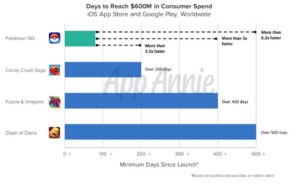 So how does Pokemon Go capture value? The company sells “virtual goods,” a phenomenon that has taken off in the world of livestreaming and gaming over the last few years. Users can purchase Pokeballs or coins to help uplevel them, unlocking additional functionality for players and making the game more enjoyable as a result. Furthermore, Niantic has toyed with the possibility of allowing businesses to pay to get Pokemon in or near their stores for increased foot traffic. The company creates value by tapping into the nostalgia of former Pokemon players to test mobile AR, encouraging users to continue using the product and generating geographic datapoints by unlocking increasing functions with more animals collected. 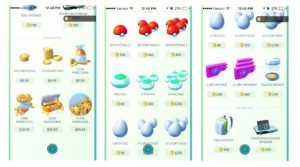 But Pokemon has had an unceremonious fall from grace. Over the past few months, usage has dropped substantially as the “try anything” userbase has dropped off. Daily revenue fell from a high of $16 million to $2 million, and daily usage decreased from 27 million to 700k. While the augmented reality aspect of the game brought AR into the mainstream, the company has had trouble differentiating Pokemon from other mobile games. Users complained that while the AR component originally piqued their interest, the game itself is shallow.

Going Back to Basics

While augmented reality sparked a ton of initial interest, the game has not proven to be particularly fun for users. Despite claimed health benefits of exercising slightly more, users failed to see the benefit of walking around collecting virtual, animated objects. But it’s not too late to salvage Pokemon Go. Niantic should double down on its content creation: adding new augmented reality elements to the game to attract users in a sustained fashion that serves as a point of differentiation. Nostalgia alone does not retain users, and while mobile gaming attracts a large audience, the mainstream userbase Niantic is targeting demands more creative content that leverages AR.

Another major opportunity for Niantic is to focus on the social elements of augmented reality. As Facebook demonstrated this week in its F8 conference, the future of these technologies is inherently social. Pokemon Go lends itself naturally to a social environment – collecting creatures, Pokeball training or sharing tips with connections is an interesting use of the technology that encourages people to keep coming back to the platform. As it stands, Pokemon’s technology and business have no network effects, but a social component could encourage users to stay in the game for longer.

Niantic has opened up the floodgates for mobile AR, and reached demographics these games ordinarily would not. Their initial efforts have been commendable, but they need to focus on content and social interaction in order to enhance the technology and value capture opportunities. Niantic’s foray into AR through Pokemon go leads to the conclusion that in some instances, the medium is not necessarily the message. Just because they developed interesting and unique technological advances did not necessarily mean that content had to take a back seat – something other AR and VR content developers should take heed.

Finally, Niantic has a bigger scope than simply Pokemon Go. The company has developed a game called Ingress, and will likely continue to expand in the AR gaming universe. Instead of becoming the next Electronic Arts (a fate that many would be fine with!), Niantic should consider becoming a platform on which anyone who wants to develop AR games turns. If they can become the de facto SDK for AR gaming, they can add a lot more value by taking advantage of scaling content beyond the walls of the company. A value capture through revenue sharing will go a long way if the company develops an API on which all AR game developers build. By shifting from a product focus to a platform focus, Niantic can capitalize on its successes (and learnings) from Pokemon Go.

Student comments on Niantic Labs and Pokemon Go: Bringing AR to the Masses