Alex White, now CEO of Next Big Sound, spent his freshman year summer internship at Motown records stapling weekly CD sales. Looking at these numbers, he began pondering the reasons why some artists become uber-successful while others fizzled. Once he returned to Northwestern University, he enlisted the help of two friends to build a company dedicated to disentangling the black box of an artist’s trajectory [1].

Now Next Big Sound is doing just that – using big data to help make sense of the chaotic-seeming and hit-driven music industry. The company analyzes everything from Spotify streams, YouTube hits, and iTunes sales to Facebook likes, Wikipedia page views, and Twitter mentions to predict album sales with astonishing accuracy – the company claims its forecasts are accurate to within a 20 percent margin of error for 85 percent of artists [1]. 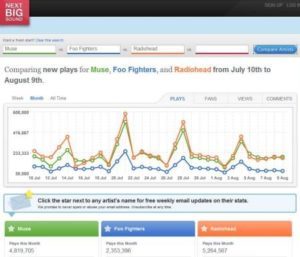 No longer solely reliant on the executives and their so-called “golden ears”, record labels are flocking to the service [2]. As a result, other competitors using predictive analytics to determine future success of a particular song or album, like Music X-Ray and The Echo Nest, are entering the space.

Next Big Sound differentiates itself from competitors by going one step further in its analysis. The company not only predicts hits, but also tracks the effects that radio plays, talk show appearances and other events have on an artist’s performance (in terms of sales and video views) [3]. Also, Next Big Sound’s software helps musicians connect with fans by analyzing metrics across Facebook, Twitter and YouTube and suggesting ways in which talent can use these platforms to increase fan connection and airplay [3]. Finally, Next Big Sound’s database is particularly useful when artists select singles—utilizing statistics from previous albums to learn what kinds of songs performed best over time.

As sponsorships have become an increasingly important revenue stream for artists, Next Big Sound has begun to tailor its product offering to large brands like Pepsi, American Express and Absolut [3]. By determining which artists are likely to blow up in the next six months or what music attracts a certain demographic, Next Big Sound can help brands spend marketing dollars more effectively. 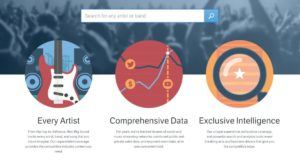 Next Big Sound captures customers throughout the value chain – from record labels and Fortune 500 companies to individual artists. The company charges an annual subscription fee, which varies based on service level. Individual artists wanting to better understand their relative performance on Spotify and other streaming services can access more basic services (with pricing starting at $20 / month) [4].

Next Big Sound’s algorithm has been so successful (predicting the 2014 Billboard top 200 with 80% accuracy) that Billboard now even publishes two charts dedicated to the company’s up and coming artists [6]. Skeptics wonder whether these predictions have reached a point of self-fulfilling prophecies – is the company predicting hits or actually creating them? 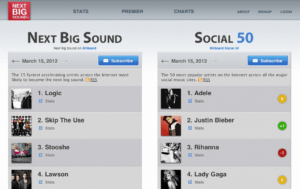 Brand partnerships are one major area of growth the company envisions. Next Big Sound has just begun to collaborate with large corporations to help steer the $1 billion plus that is being spent each year by brands on music-related marketing and sponsorships [2]. Eventually, the company expects go beyond corporate marketing and provide a similar service for TV shows, video games, movies, etc.

Furthermore, Next Big Sound hopes to expand its predictive capabilities to fields outside of music. The company launched Next Big Book in May 2014 to bring their expertise to the similarly complex book publishing industry. Finally, the company won patent approval for their “likelihood of success” algorithm which analyzes popularity across a variety of metrics.

Student comments on Next Big Sound – moneyball for music?