With the advent of the mobile internet, news publishers transitioned much of their editorial content online to satisfy reader demand. General news organizations, specifically, the New York Times (NYT), have struggled to find an appropriate strategy for distributing and monetizing their content online. After pursuing an online ad revenue based strategy for several years, the NYT realized that digital advertising revenue failed to offset the losses in revenue from the industry-wide decline in print advertising and newspaper circulation. 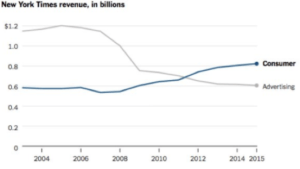 The NYT introduced a pay wall for online readers in March 2011. In this initial strategy, NYT allowed readers to access up to 20 online articles per month, after which they were required to pay for a subscription (print or digital) to view additional online content. At this time, the “pay wall” approach had previously worked well for niche news publishers such as the Wall Street Journal, and the NYT hoped to replicate this success. To date, and in comparison to other traditional newspaper publishers, the NYT pay wall has been a relative success — the service managed to attract ~1mm digital subscribers that generate a significant portion of the NYT revenue (~$400mm). However, the NYT has spent the last few years tinkering with its digital strategy as digital subscriber growth leveled off in 2013 and 2014.

Using best practices from its “pay wall” approach, the NYT shifted its focus from a general news subscription service to offering niche apps that attract specific audience segments that each have different use cases. This niche app strategy aimed to expand NYT’s reach by attracting new subscribers with more affordable subscription packages than the NYT’s general news offering. In 2014, the NYT released an array of apps including NYT Opinion for $5.99/month, NYT Now for $7.99/month, and NYT Crossword for $6.99/month. To its dismay, none of these appeared to achieve the right product-market fit that would significantly grow NYT’s digital subscriber base.

A specific example is the NYT Now app. NYT Now was a well-designed product meant to attract mobile-savvy millennial users by providing curated, short-form news stories that kept readers informed. After a highly anticipated release, the subscription-based app did not achieve the level of user adoption desired by NYT leadership. In a last attempt to expand reach, NYT Now was transitioned to a free app. Even then, the app did not help drive NYT subscription growth or conversion. While many users and online reviewers praised the design and features of the NYT Now app, NYT ultimately shut down the app in August 2016 (NYT Opinion shuttered in 2014).

Although the NYT Now app was not a success, NYT incorporated popular features from the app into its general NYT app, which will serve as the company’s core owned and operated digital distribution platform. The company has learned that segmenting its readership was not a successful approach, and that it must leverage third party destinations such as Facebook and Twitter to in order to reach younger audiences.

While many have categorized the NYT’s digital strategy as “flailing”, it is clear that NYT is one of the few traditional media companies that has made an effort to embrace and experiment with the impact of digital platforms. Outside of the apps mentioned in this post, NYT has pursued other “long shot” initiatives such as distributing Google Cardboard headsets to its print circulation to promote its NYT VR app released in November 2015.

Although the NYT has a growing list of digital failures, the company’s innovative experimentation with digital platforms will pay dividends as its audience continues to shift to a mostly online readership.

The New York Times’ new app strategy seems lackluster at best — so what does it do now?