The internet is drastically changing how the business community is thinking about strategy and competition. Ten years ago, established giants such as Honeywell and Ford would have never thought that a (relatively) new web-search engine company would become its direct competitor, and yet the connectedness of devices and increased data capabilities are allowing New Tech companies such as Google and Apple to enter markets traditionally reserved for the Old Industrials. Now, these two forces are entering into a race to establish viable business models to both connect billions of devices and machines (value creation) and consequently making their customers’ businesses more efficient and effective (value capture). Although New Tech may seem like the winning bet given its recent momentum in toppling incumbents in markets like retail, the Old Industrials, with good execution, will stand to win the race and protect their existing base from the encroachment of the New Tech.

What is the Industrial Internet and how does it create and capture value?

The term “industrial internet” was first used by the consulting firm Frost & Sullivan in its June 2000 report about the digital transformation of companies. The term is further refined by companies such as GE and AT&T and widely used today to mean the integration of machinery with sensors, software, and management systems. Value creation occurs when companies that use these systems to more effectively control its machines, conduct timely adjustments, precisely diagnose of complex problems, and accurately predict future demands. For example, a manufacturing plant can deploy sensors to specific locations in its plant, collect certain streams of data, analyze and calculate using algorithms to predict its exact maintenance requirement, and therefore order the exact amount of repair parts at specific times to maximize cash flow. Furthermore, marketing data could be directly integrated into the software system so the plant knows exactly what it needs to produce right now; such technology will be crucial for a fashion retail company to stay competitive and take greater market shares. Value capture occurs when the implementer of the Industrial Internet install such technologies to the manufacturing plants, provide system maintenance and software updates, and deliver any other special and/or customized requirements for a fee.  The value captured is a function of customer performance: Industrial Internet provider can be expected to take a portion of the value when its customers raised its sales or reduced its cost. 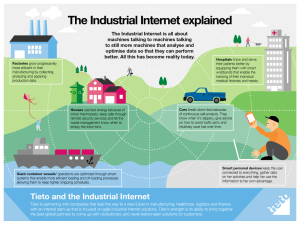 Who will be the winner?

From the value creation standpoint, it seems that New Techs will have the advantage over the Old Industrials; after all, Google and Amazon did make the internet what is has become today. However, when looking at advantages in Value Capture, which translates to sustainable business models, I believe the advantage lies with Old Industrials.

Although the above mentioned products are consumer-focused, there are still large parts of the distribution channel that relies on B2B marketing capabilities to companies such as construction firms and auto dealerships, which Honeywell and Ford have well-established relationships. Unlike B2C marketing, the B2B marketing channels rely heavily on centralized decision making and lower tolerance for risk. Beyond Ford and Honeywell, many Old Industrials such as GE and Halliburton, has marketing competence that are almost entirely B2B. While New Techs can still gain some ground in the consumer-focused sectors, there will be extremely high barrier to further penetrate: GE have been making safe aircraft engines for years, their creditability with Boeing cannot be easily replaced. Even if Google and Apple have the balance sheet to make the capital investments, there is still some risk associated with switching suppliers. Therefore, although Google has the potential to create better value, the Old Industrials will be the ones with the marketing capabilities to better capture value.

Furthermore, beyond the marketing relationships, New Tech companies do not yet have the organizational capabilities to mass produce, distribute, and sell the machines produced by Old Industrial. And due to the marketing relationship barrier mentioned above, the Old Industrials will have time to establish viable Industrial Internet technologies before the New Techs are able to create its internal industrial capabilities. Massive amounts of investments and commitment have already been made to the development of industrial internet. Initiatives such as the Industrial Internet Consortium, backed by companies such as GE, AT&T, and Cisco, have been pushing heavily in developing Industrial Internet solutions, which will eventually allow its member companies, almost entirely Old Industrials, to better create and capture value than the New Techs in the long term. 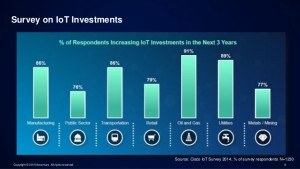 Student comments on New Tech vs Old Industrials: who will win the “Industrial Internet” race?