Founded in 1997 as a DVD by mail service, Netflix has transcended this physical product delivery service and become a platform for so much more. As Netflix moved to become an online streaming service as well as a producer of original content, it has created a business with significant network effects. Netflix exhibits both direct and indirect network effects through its recommendation engine, content acquisition process, and enabling devices.

Approximately 75% of Netflix’s viewer activity is driven by recommendation. The Netflix engine makes recommendations based on the metadata of the individual show, and more importantly, the user’s behavior. As more users get on the platform and watch content, the Netflix recommendation engine grows smarter. [1]  As a result, an increase in the platform’s usage leads to a direct increase in value for other users through better recommendations. The same could be said for the company’s content acquisition strategy more broadly. Netflix collects terabytes of data on consumer viewing behavior so it is incredibly well-informed as it approaches its content acquisition negotiations, and when creating original content.[2] These direct network effects that occur from having more people using the Netflix platform, help the company create a better product and enhance the user experience overall.

Netflix also has experienced indirect network effects on OTT enabling devices, including streaming media players that enable your TV to connect to the Internet (such as AppleTV, Roku, and Chromecast), smart TVs that are Internet-enabled, and other TV-like devices in which people can consume content (such as the iPad, Kindle Fire, etc.). For example, Roku sales have continued to outpace those of its aforementioned competitors which can in part be contributed to its close relationship with Netflix.[3] Starting in 2008 when Roku unveiled the first Netflix Player, the two have worked closely together.[4] In fact, Roku even revealed at CES this past January that it was partnering with Netflix to create a 4K Smart TV.[5] Thus the increase in usage of Netflix, promoted the increase in usage and value of Roku and others. 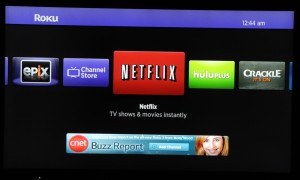 In a world in which network effects are becoming increasingly important to consuming content, incumbents such as the traditional cable providers, are having a hard time competing. Initially Netflix and the cable companies were not direct competitors.  Netflix’s business model revolved around monetizing studio’s library content, which previously wasn’t being monetized in a truly lucrative way. However, as Netflix has moved into premium original content, and continued to invest in its own library – their power as a major distribution player has increased. In 2016 alone, they are estimated to be investing ~$6bn in content, making the service better poised to serve as a traditional cable replacement service.[6] 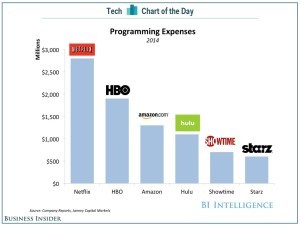 However, it is not just the rights to this content Netflix is acquiring, it is the user behavior data. With over 65mm subs as of the end of Q2 2015, Netflix possesses more than triple the amount of video subscribers as the US’ largest cable provider – Comcast.

One way for incumbents to compete is to evolve. We’ve seen this through the creation of cable apps such as Xfinity TV and TWC TV. These apps allow customers to consume TV anytime, anywhere, and on any device. Furthermore, they have comprehensive back end systems collecting user data. We’ve also seen this through updated guides and STBs that enable cable providers to collect more comprehensive data on usage. That said, the cable providers have historically been very hesitant to use any of this data due to legal restrictions associated with their Title II status. Thus, I believe Netflix is in a power position, and as its search engine grows smarter, and its content library grows stronger, it is further cementing itself as a permanent fixture in the global media landscape.