Netflix was a first mover in the now very competitive over-the-top (OTT) video programming market. With over 86 million subscribers, they offer a digital platform of movies and television shows that users can access via a monthly subscription. The platform relies heavily on both direct and indirect network effects, and thus must pay close attention to satisfying users, content owners, and content creators in order to be successful. 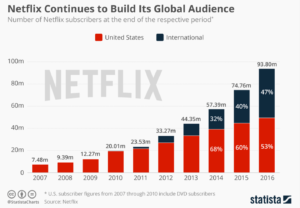 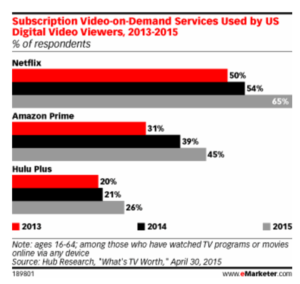 How Netflix Creates and Captures Value from Subscribers

Netflix creates value for subscribers by offering them a large catalogue of television and movies that they can watch on demand. Their content strategy so far is fivefold:

Netflix captures this value with a monthly subscription payment. There are three tiers from $7.99 – $11.99 depending on the number of screens used. 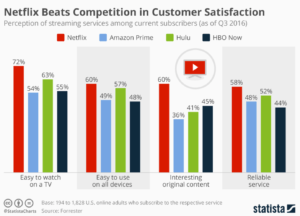 How Netflix Creates and Captures Value from Content Providers

Historically, Netflix has depended on studios for content, paying a fee to license it for a certain amount of time. This was a valuable proposition for studios who could monetize their content beyond traditional windows with this new SVOD licensing revenue stream. However, Netflix came to see that this was risky for two main reasons: 1) studios, seeing cannibalization of their other revenue streams from OTT services (and now wanting to destroy these services or create their own), may refuse to license content in the future or charge more for it, and 2) studios can multi-home and give their content to competitors, decreasing its value to Netflix. Because of this, Netflix has invested heavily in original content. 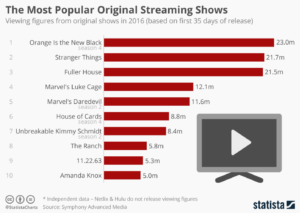 However, attracting filmmakers and stars to create Netflix originals has its own issues. Netflix can offer a lot of value to creative talent including creative freedom, no pressure of ratings or mid-season cancelation, and large up-front payments. However, the platform’s unique positioning can also be a turn-off: many filmmakers still want to see their films on the “big-screen” via a traditional theatrical release, and the Netflix model does not allow creatives to share in the potential upside of a hit that a normal studio theatrical launch or broadcast/cable premiere deal allows (most A-list actors/directors get a share of the box office or syndication revenues). With Netflix, creative talent gets paid the same whether the content is watched by 1 person or 10 million people. This means lower risk for talent (with a larger upfront payment), but also means zero share in the potential riches that a hit could win from syndication in traditional windows.

The Netflix platform has very strong indirect network effects. The more movies and TV shows on the platform, the more subscribers value the service. Users need to feel like there are getting access to high quality, new, and exclusive content in order to see value in the product. Because of this, in 2017, Netflix plans to spend $6 billion dollars on content in order to secure high quality and exclusive content from providers.

The Netflix platform also relies on direct network effects to decrease marketing spend and to create their personalization and data tools. Water cooler and social media conversations are often dominated by shows and movies, so people feel the need to be watching what their friends are watching. In this way, people gain value from also having their friends on the platform. Netflix also gains value from this direct network effect as word-of-mouth recommendations and press on new shows are free marketing.

Subscribers also derive more value from Netflix when more subscribe to it because more customers means more data and a better content recommendation engine. The recommendations tool is important for retaining users because it connects them to personally relevant content that keeps them watching and subscribing. More viewership data allows Netflix to create better content and negotiate better content prices with providers.

Steam: The iTunes of Video Games

Student comments on Netflix: Attracting Both Subscribers and Content Providers to the Party.