From its inception, Netflix has used data as an asset to personalize its content and service to customers. Netflix uses data in many ways, but 2 key uses are enabling Netflix to create value for its customers: 1) feeding its recommendation engine; 2) predicting successful new original content and content acquisitions based on viewing habits.[i]

Netflix’s recommendation engine is trying to solve the “rabbit hole problem” in which the service has too much content so a viewer gets lost.[ii] The company’s recommendation philosophy has, however, changed over time. Originally, the recommendation engine for the DVD business was based on predicting how many stars a viewer would give a piece of content. Netflix tried to improve its algorithm in 2006 by launching the “Netflix Prize”, a machine learning and data mining competition to improve its 5-star rating recommendation system.[iii] Two years later, a team won the $1M prize, but Netflix never incorporated the algorithm into its service for a couple reasons. First, shortly after creating the competition, Netflix launched its streaming service, which generates much more data than the DVD business. Second, it realized that the competition was trying to answer the wrong question. Originally, Netflix was trying to make recommendations by predicting the ratings that users were going to give a piece of content.

Netflix’s new recommendation engine uses customers’ viewing, search, scroll, and ratings data as well as time, date, and the device being used to predict what a viewer will be interested in watching.[iv] This is layered on top of the content, which has been tagged with metadata to find similarities among pieces of content. As of 2014, Netflix had 76,897 “altgenres” or unique ways to describe types of movies and shows.[v] Netflix uses the tagging to personalize each customer’s homepage with content that it believes the customer will like based on characteristics of what the customer has watched previously. 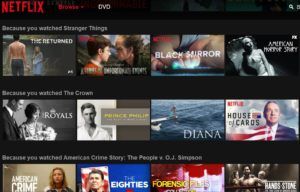 Netflix also creates value by using data to predict the success of original content and content acquisitions. For example, Netflix used viewership data to predict the success of House of Cards, its first foray into original content. The company not only knew which subscribers were fans of Kevin Spacey based on their viewing habits, but it also targeted those exact subscribers with House of Cards marketing and recommendation to ensure that the show was watched by the people most likely to enjoy it.[vi] Netflix is using original content to attract more customers and to keep those customers from churning. The company has set a goal of releasing new content every month that appeals to every individual subscriber and is on a mission for 50% of its content to be original.[vii] 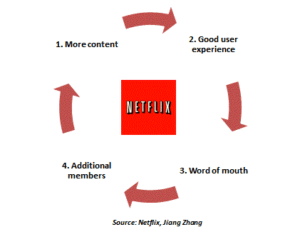 Netflix, along with other content streaming services, have a major data advantage over traditional broadcast and cable networks. Streaming services deliver content directly to viewers through their proprietary websites and applications, therefore they directly collect and own the data. Approximately 100 million hours of content are viewed on Netflix every day (as of August 2016),[viii] and Netflix can use this data to improve the quality of its service for subscribers and keep subscribers from churning by recommending content they are more likely to watch and enjoy. On the other hand, traditional television networks do not own viewership data because the content is delivered to viewers through a third party, often cable providers, that own the data. Networks need to use Nielsen ratings as a proxy for overall viewership. Additionally, networks are aired as a single feed to all viewers, so are limited in their ability to personalize and target specific viewers with content or marketing.

Netflix’s data usage has been incredibly successful, attracting new subscribers and enabling the service to grow to 93.8 million subscribers worldwide as of December 2016.[ix] The media industry is becoming increasingly competitive with more providers and high quality content, but Netflix has used its data advantage to stay relevant.