Few industries have been disrupted by digital innovation like media and entertainment. A traditionally B2B business, digital disruptors like Netflix, Hulu, and Amazon have begun to reshape the business to become much more B2C. And with this shift, traditional sources of revenue are weakening, forcing incumbents to rethink how they should do business and how they monetize their content, often looking to merge or acquire with other horizontal or vertical firms to gain scale quickly.

One such incumbent is NBCUniversal (NBCU), the international film and TV studio and distributor that is owned by telecommunications giant Comcast. With a large film and TV studio (Universal), broadcast channel (NBC), and cable networks (Universal Cable Productions), NBCU has seen all of its businesses suffer from digital disruption. While the firm has done some things to date to capture some of this disruption (to be discussed in more depth below), it has not done enough. This post will make recommendations from an investment and organization standpoint as to what NBCU should do to best compete in the future.

What’s interesting to note here is that NBCU is still relying on others to forge the relationship with consumers, rather than going to direct themselves. It’s only foray into establishing an OTT (over-the-top) channel, the comedy oriented SVOD service called Seeso, was a failure, and the company shut the service down in late 2017.3 For a company that has so much content, it decidedly went niche in its first, and only, D2C offering, likely a defensive and risk averse move as it hoped to preserve its traditional revenue streams.

This, however, is the wrong approach, as NBCU should aggressively move into the D2C space itself. Going D2C is necessary, as TV viewership, and resulting advertising dollars and cable affiliate fees, has declined, as shown here: 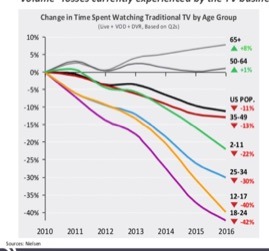 With the increase in cord cutters every year, offering a D2C service will become only more necessary as time progresses. NBCU has the scale and ability to enter this business itself.

There are two reasons why NBCU has not made a large investment to go D2C. The first is that the company generates a large piece of revenue by licensing its content to other D2C players like Netflix and Hulu. The second is that there are large upfront capital expenditures required to build a streaming service. This is exactly what NBCU should do, however. One of its biggest competitors, The Walt Disney Company, did just that when it purchased a majority stake in BAMTech, totaling its investment in the company at over $2.5 billion.4 Disney understood that it needed BAMTech’s streaming video technology to build the backbone of what would eventually become two D2C services (one ESPN-branded that launched in April of this year, and one Disney-branded that will launch in 2019). NBCU should make a similar push to acquire or develop technology in-house to build a streaming service. This is a crucial first step, as providing a quality and seamless viewing experience is necessary, especially if the company decided to provide live feeds from its TV entities.

Once an investment in technology is made, NBCU can announce the creation of its own SVOD service. And, unlike Netflix, it does not need to vastly ramp up its content spend to have a competitive offering. With its vast array of media properties, NBCU generates enough new content and already has a vast library of content to offer a legitimate SVOD competitor. While it should make certain pieces of content exclusive and/or original to the service, it will not need to drastically ramp up content spend.

To date, NBCU’s digital investments and initiatives by its Digital Enterprises group under Maggie Suniewick.5 While this is a step in the right direction, it still ensures that digital is a parallel business to its traditional ones. The company needs to reorient itself away from relying on others for distribution to a distribution company itself. To do this, they should create one distribution arm for all of its content, with its D2C offering at the core of that group. Disney made a similar organizational change, reorganizing so that one of its major business units became Direct-to-Consumer and International.6

What this effectively does is position the company to think about its D2C offering first for its content, and then think through other monetization and distribution opportunities as appropriate. Some content may be best for other distribution opportunities, but this ensures that NBCU’s own D2C service would get the first look. It also allows its other businesses to continue to operate mostly as is, since the D2C offering would be a second window behind theatrical or linear TV distribution.

The final benefit of having a D2C relationship is the consumer viewership data that comes with it. To date, NBCU develops and produces content in the traditional sense, based on the experience and talent relations of its executives. In this sense, it makes content in a black box, without knowing beforehand (with the exception of sequels) if a piece of content is likely to work or not. By creating a D2C service, NBCU can use the viewership data to better inform its content decisions. As a result, they can make smarter bets on what content to develop and produce, lowering the risk of content failure.

This does require them to create a feedback loop from the D2C distribution unit to the other NBCU business units. It also requires a shift in mindset from its creative executives, who have not used consumer data to date when thinking about content decisions. In theory, this creates a virtuous cycle for the company. As it gets more user data, it gets better at using that to make new content decisions, which then eventually get distributed on the SVOD service, making the service more valuable as the content better tailors itself to consumer wants.

It’s clear that Disney provides a good example for how NBCU should move forward to best capture the digital disruption taking place in the entertainment industry. That being said, it can also use its unique strengths, particularly with its parent company Comcast, to its advantage. Perhaps Comcast could provide the technology needed for a D2C service, as it has parallel products like its Xfinitiy 1 cable box. And while Disney’s streaming service will be very much family oriented, NBCU can offer a more comprehensive content offering, putting it more in competition with Netflix to achieve a wider audience. The company needs to take the first step to make the bet on itself, rather than its current practice of placing big bets on others.

Brewing a Successful Future at Nespresso?

Student comments on NBCUniversal: A Path to Going D2C