The self-driving car industry is filled with companies ready to take the driver’s seat in the market. With automobile accidents as a leading cause of deaths in the United States with 1.2 million lives lost annually, this new technology has the potential to remove the elements of human error and promise a world of safety and convenience, redefining how we think of movement and transportation today [1].

The major players currently in the spotlight include [2]:

While there are rumblings of innovative tech companies like Apple and even Amazon secretly creating their own self-driving technologies, Alphabet spunout Waymo is one of the few large technology company that is publicly making strides in the space, competing against the Teslas and Ubers of the world, which are well-aligned to play in the transportation arena [3]. Each of these companies is attempting to gain the trust of consumers in this large potential market. A Business Insider report projects there will be 10 million self-driving cars by 2020 [4]. Note: While most of these companies are exploring B2B models via self-driving trucks as well, this assessment will focus on personal consumer adoption of self-driving cars.

Despite Waymo’s strong ties to the resources of Alphabet, having started development in Google X’s labs in 2009 [5], I am going short on Waymo. I project they will ultimately be a loser in the industry and fail to gain traction as a market leader. Although it is early to make such bold claims, I believe Waymo’s attempts to create value will prove unsuccessful.

Reasons why I think Waymo will fail to create and capture value:

(1) Waymo is positioning themselves as an approachable technology fit for all. Waymo clearly has strong technology in place, having worked to refine the accuracy and safety measures of their self-driving capabilities over the past several years. However, their go-to-market strategy appears focused on targeting everyone, cutting costs with suggestions of offering their car at an affordable price. Their market tauts Waymo as “building a safer driver for everyone” with images of toddlers and families streaming in their landing page’s background [6]. Throughout the inital car design process, Waymo (or at that point, Google X) received feedback on designing a ‘cute’ car, taking a very different approach when juxtaposed against the modern, sleek Tesla models [7]. I believe Waymo is setting themselves up for Google Glass (take 2) in terms of a potential market flop. While Google Glass positioned themselves as stylish and ‘cool’ for early market adopters, I fear Waymo may be spreading themselves too thin by taking the exact opposite approach, targeting a part of the market that is the most risk averse (eg, families and parents) and therefore may be less likely to actually adopt early on (preventing Waymo from having a first-mover advantage) [8]. 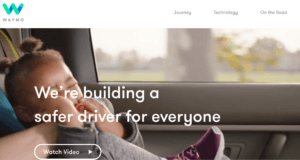 (2) Waymo provides software and select hardware, not the full offering. Unlike Tesla, which controls all parts of its supply chain, Waymo has explicitly stated that they will not take the full car manufacturing route [9]. Like Uber has done with Daimler, Waymo is establishing partnerships with manufacturers. They will be rolling out Chrysler minivans in Arizona and California this year [10]. (Note: They’re starting with minivans– if that doesn’t scream ‘we want to be safe for families,’ I don’t know what does.) In my mind, not owning the full supply chain is risky, and I think could lead to technology hiccups and a disjointed roll-out in terms of branding and go-to-market. I am reminded of Google Express competing against Amazon. Google has tried to partner with brick-and-mortar retailers to go up against giant e-commerce player Amazon but has not significantly won share [11]. I predict Waymo will face similar difficulties and not successfully execute on this rollout. However, it is notable that Waymo has made a recent move to bring some of its hardware (eg, laser-based radar, sensors) in-house, suggesting they are looking to control more of their supply chain, and it does remain unclear how Waymo will ultimately decide to position their partnership relationships with automobile manufacturers [12]. 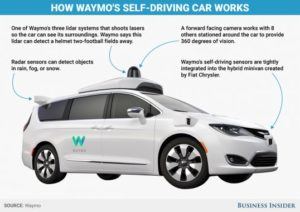 (3) Waymo was able to innovate because they had the backing of a large tech company as a security blanket. Since the creation of umbrella organization Alphabet, the company’s leadership has spun out most of its experimental moonshots, choosing to hone in on the financial performance of its Google unit. The fact that Alphabet’s leadership (in particular the CFO) has taken a strong stance on focusing on the core ad business makes me wonder whether Waymo will continue to have the freedom and resources to experiment [13]. Now that their technology has been refined, the question of how to capture value, go-to-market, and generate revenues is at the forefront. I believe that because cars are not Alphabet’s primary business, Waymo does not have the edge that a company like Tesla or Uber does to effectively compete for talent and resources. I question whether Alphabet can truly expand beyond its search business and diversify its holdings into high-risk (though game-changing and monumental) bets like Waymo. 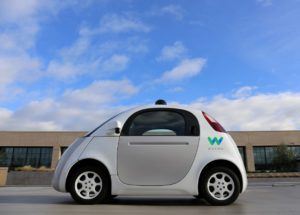 Ultimately, the two key questions in my mind boil down to:

A. How will Waymo be able to capture the hearts and minds of everyday consumers as well as car manufacturers?

B. How will they go-to-market and compete against competitors Uber and Tesla, whose core competencies are in this space?

Additional questions to consider: Will they partner with more automobile manufacturers? Will they enter the ride-sharing space? Or will they take an entirely new approach we haven’t even thought of yet? And at what price will they enter? Perhaps only time will tell. Across all these companies, while there are clear public policy hurdles to overcome, there is no question that self-driving cars will be hitting the roads at mass sooner rather than later. Until I’m proven otherwise (and I’d love to be wrong), I’m placing my bets elsewhere and saying ‘nay’ on Waymo.

Could the Rise of Digital Media Spell Doom for the NFL?

Student comments on Nay on Waymo: A Prediction for the Self-Driving Car Race