The dinosaurs weren’t too good at crowd sourcing. And perhaps that’s one of the reasons they were wiped out by an asteroid 65 million years ago (as the theory goes). But NASA is banking that humans can do it better.

In 2014, NASA launched an initiative named the NASA Grand Asteroid Challenge in an effort to reach out to the general public, or “citizen scientists” to develop algorithms to help identify asteroids in telescopic images of space. They partnered with Harvard University and Professor Karim R. Lakhani, an expert in crowd sourcing at Harvard Business School

The astronomy community has endless amounts of data but, historically, searching for tiny moving objects across the night sky has been a tedious and unreliable endeavor. NASA offered rewards totaling up to $55,000 to incentivize junior astronomers, freelance programmers, and scientists with time on their hands to take a crack at writing software that will analyze various images and look for trends of moving objects (even setting up a TopCoder project).  NASA then took the best parts of each leading algorithm and patched them together to create one final product that could be used on any computer with any set of astronomical images. The software is available to anyone who wants to use it and has a telescope to take pictures of the night sky with.

Once a user (or the program) has identified a possible candidate for further investigation, the software will look into a database and compare the data with previous studies by other astronomers, alerting the user if this article is in fact a newly discovered asteroid. 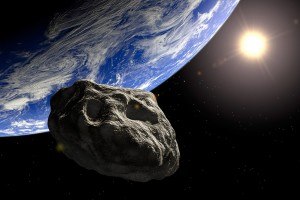 NASA has tapped into a community that is passionate about the subject. It is very unlikely that these individuals are participating strictly for the money, since the amount is rather modest. Amateur astronomers and programmers can see they have a great opportunity to contribute directly to the field and possibly invent a part of a tool that will be used on thousands of computers world-wide in the search for near-earth objects.

NASA benefits from this too, at a time when the agencies budgets are constantly under scrutiny and being hacked away bit by bit each year – to the tune of about $200 million in 2015. By making use of the crowd, NASA can avoid the overhead of committing a team to building comparatibely simple software tools like this and potentially gets some creative ideas on how to solve the problem. At some point, the quality of further development of the software could suffer without a dedicated team of engineers looking at how to create the highest performance tool possible. But for the infancy of such a program the crowd seems to be a great way to get it started.

This seems like a great strategy for NASA to leverage the time and skill of people who care about a subject like astronomy. I could see more projects coming out of this, with the ideas being formulated at the crowd and NASA acting as a filter for the ideas it likes best and then choosing to invest resources into the most promising leads.