Musical.ly, a DIY music-video social platform launched by two Chinese entrepreneurs – Alex Zhu and Luyu Yang, first came on the scene in 2014. It has quickly grown to a 200 million user base globally by Sep 2017 and hasn’t fallen below the top 40 lists in app store since launched.[1]

A Quick Intro into the New Social Media Hit

Musical.ly primarily targets at 13 to 18-year-old teens. Users could make short music videos clips where “Musers” would lip-sync or dance or do a comedy routine to a popular music and audio bites, then share with friends on the platform.

With the app’s virtual gift program, users could buy coins which they tip acts with (100 coins for $0.99). The act receives 50% of every dollar in payment, while 30% goes to Apple and Google’s standard platform fees and 20% to Musical.ly.[2] 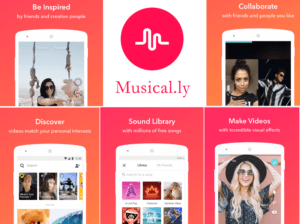 Lesson One –  how to take on Incumbents in a crowded market

The social media market in US, dominated by Facebook, Snapchat and Instagram, seems like such a crowed market that will deter any new comers from entering. In my opinion, Muscial.ly was able to successfully carve out a space for itself by doing below things right:

Hence, for a startup to take on incumbents, one has to come up with the right recipe –going after a unique customer segment, differentiating in product offering and identifying the most urgent pain point.

Lesson Two – how to scale quickly

Hence, for a startup to scale quickly, one has to constantly pulse check on user growth and improve product features. When company is still growing, think about ways to leverage existing platforms to drive traffic.

Lesson Three – will the disruptor now be disrupted?

In Nov 2017, Musical.ly was acquired by Bytedance Technology Co., the parent company for TouTiao News, for $1 billion. The Parent company then launched its own version of music social app, Tik Tok, into Asia.

Viv Gong, Head of Marketing, Tik Tok, said: “The Tik Tok community is growing rapidly in China and now it’s starting to spread quickly into more global markets. Talented youth across the region have a reason to celebrate, create, and share as making music videos is becoming easier and more fun with advanced technology and a world of Tik Tok supporters to cheer them on.”[6]

As we look forward, what should be the next step for musical.ly – aging up from teens to adults, or providing more value-added features to existing young consumers? If consumer demands and preferences shift so quickly, how should musical.ly defend itself from yet another social app targeting at an even young generation with even more interesting features? Will the disruptor finally be disrupted?

[1] The inside story of Musical.ly – Business Insider, http://www.businessinsider.com/what-is-musically-2016-5

[2] From Musers To Money: Inside Video App Musical.ly’s Coming Of Age, https://www.forbes.com/sites/natalierobehmed/2017/05/11/from-musers-to-money-inside-video-app-musical-lys-coming-of-age/#4d284b5a6cff

[3] 22 Musical.ly Statistics and Facts (December 2017) | By the Numbers, https://expandedramblings.com/index.php/musically-statistics/

[4] Musical.ly has lots of users, not much ad traction, https://digiday.com/marketing/musical-ly-starts-selling-ads/

Student comments on Musical.ly: Breaking Through the Social Media Clutter