On March 16, 2015, Business Insider released an article titled, ‘Wall Street’s trillion-dollar money managers are under threat from a new breed of low-cost advisers.’ Business Insider was one of many media outlets discussing the threat that so called ‘robo-advisors’ posed to traditional financial services firms with exposure to wealth management businesses such as mega-firms Merrill Lynch and Morgan Stanley. 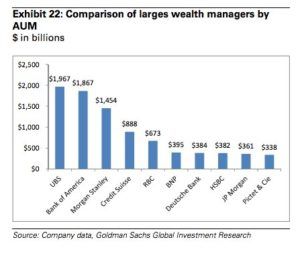 The popular consensus in the media, and even amongst some industry experts, was that robo-advisors were a huge threat due to their disruptive strategies that followed the BSSE theories of both low-end and new market disruption. Much like traditional wealth managers, robo-advisors offer investment vehicles, investment advice, and diversification to clients in need of a place to invest money. However, where robo-advisors create differentiated value for their customers is by lowering barriers to adoption by creating a low cost, technology driven platform that allows robo-advisors to offer services without minimum client balances and with significantly lower fees than traditional wealth mangers. 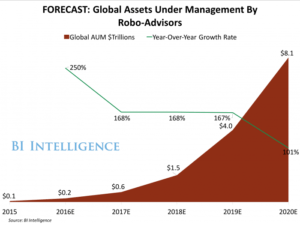 The wealth management industry captures value from clients by charging an annual fee for the clients’ assets managed by the wealth manager. As can be seen in the following chart, robo-advisors such as Betterment and WealthFront charge 0.15%-0.25% of AUM while traditional wealth managers like Merrill Lynch charge 1.0% or higher. For a client with $100,000 of investable assets this amounts to $800 taken from their account every year that doesn’t get the benefit of compounded investment returns, a significant sum. 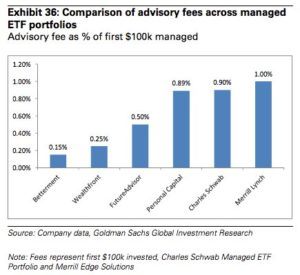 By creating a business model that removes minimum client balances and substantially reduces fees, robo-advisors have attracted clients that were non-consumers of wealth management services. These non-consumers generally fell into three buckets: (i) people with lower net worth but still some investable assets that were being underserved by existing options, (ii) people who refused to pay wealth managers 1%-2% of their assets, and (iii) younger people that were just starting to build investable asset bases that would grow as their careers matured, potentially the most important group of non-consumers to traditional wealth managers.

In addition, over time, robo-advisors started taking away lower margin customers that were being over served by full-service traditional wealth managers. These customers were paying extremely high fees to have access to a team of advisors, constant investment recommendations, and actively managed funds. However, there were many clients, especially around the minimum investable asset requirements, that didn’t need this high level of service to meet their investment objectives. Robo-advisors were able to create a low-cost, technology driven model that better met the demands of these clients at significantly reduced fees. Most traditional wealth managers were comfortable letting these clients leave because the fee scale is calculated as a % of AUM and, as such, clients with smaller investable asset balances were served at significantly lower margins for the wealth manager. With such a strong value proposition that has led to tremendous growth, robo-advisors made headlines for their threat to disrupt the entirety of Wall Street’s money management business. A threat that large financial services firms such as Morgan Stanley haven’t taken lightly.

As early as July 2016, Morgan Stanley publicly stated its digital wealth management strategy when Jonathan Pruzen, the company’s CFO, outlined a three-pronged plan: (i) improving decisioning analytics for both advisers and clients, (ii) implementing back-end automation for advisers to improve efficiency, and (iii) creating new ways for clients to interact with Morgan Stanley. At the time, the publicly announced strategy was rather vague and didn’t directly address the robo-advisor threat. The first prong of the strategy was aimed at improving the value proposition of Morgan Stanley’s offering relative to any differentiated value a robo-advisor could add through technology. The second prong was aimed at reducing cost to potentially allow Morgan Stanley to reduce fees to clients or improve margins. The third prong doesn’t give enough details to understand the actual impact. Fundamentally, these changes were aimed at sustaining the existing Morgan Stanley wealth management business and serving existing clients better. According to CEO James Gorman, the majority of Morgan Stanley’s wealth management assets were from households with greater than $10MM in investable assets while only 2% came from householders with less than $100k. Morgan Stanley was entrenching its business model and continuing to allow the new digital wealth managers to threaten the long-term viability of traditional wealth management businesses.

It took a long-time for Morgan Stanley to roll out their digital wealth management solution but strategically it appears to have ended in a logical place. They have addressed both threats to their core existing customer base, churn of low margin clients as well as non-consumers who become target clients over time. Morgan Stanley has introduced technology to improve the customer experience with digital analytics tools and strategies to serve existing customers better. They have also introduced efficiencies through digital technologies to allow the wealth management division to operate at a lower cost basis. From the perspective of robo-advisors stealing lower margin customers, Morgan Stanley has both reduced cost within the traditional wealth management services, potentially allowing marginal customers to consume a lower-touch form of service at a lower price, as well as introduced a low-cost robo-advisory business for marginal customers who value lower fees over high-touch services. Finally, from the perspective of potential new market disruption, Morgan Stanley has reduced barriers to becoming a client and reduced fees to open the doors to non-consumers of Morgan Stanley’s wealth management services. This should provide a new growth business for Morgan Stanley and provide an avenue to attract younger customers that are able to ‘graduate’ to higher touch services as they accumulate more assets over the course of their careers. I wouldn’t be surprised if this last element was what drove Morgan Stanley to open the robo-advisory business. Allowing potential future high net worth customers to explore and be served by alternatives early in their careers was likely a concern for the future viability of the traditional wealth management business as generational shifts of wealth management services occur over the coming decades.

It will be interesting to watch the industry develop over time. I personally feel as though traditional wealth managers that are able to stratify customer groups into different service levels with the appropriate level of strategic attention on each of those businesses will be able to prosper despite the disruptive threat of robo-advisors. However, Morgan Stanley will have to embrace a new culture within their in-house robo-advisor, which ultimately may prove to be difficult.

Souche, the pioneer of S2b2c model in China’s auto industry

Student comments on Morgan Stanley: Who do you want to manage your money? Robots or humans?