As we saw in our case on TSG Hoffenheim, analytics can be used in various ways to improve a sports team’s performance on the field.  While baseball was the first sport in the U.S. to fully internalize and adapt based on this realization, basketball has also begun to migrate toward more analytics-heavy strategies and techniques.  The charge has been led by Daryl Morey, General Manager of the Houston Rockets, a former consultant and MIT Sloan Graduate who did not played professional or college basketball.  His prior work as a statistical consultant drove him to gain a deeper understanding of basketball and how teams operate inefficiently, costing them wins.

Morey’s most fundamental insight involved taking an increased number of three-point shots. Three-point shots in basketball are more difficult because they are further away from the basket, but Morey recognized that the 50% uplift in points received for the three-point shot (compared to a two-point shot) made it more mathematically efficient than almost all two-point shots other than dunks and lay-ups.  In particular, Morey (and others) realized that three-point attempts from the corner of the court (“corner threes”) had a higher percentage chance of going in (because the shape of the three-point line made corner threes closer to the basket) and were therefore more valuable.  Many set plays are now designed specifically to get strong three-point shooters open for corner threes.  The on-court numbers back up the commitment to this strategy as the Rockets have already broken the record for most three-point shots made in a season, with games to spare.  The team that previously held the record?  None other than last season’s Rockets.

What Morey disliked on the court were longer two-point shots – these shots produced a lower average number of points per attempt.  If a player was going to take a two point shot, Morey wanted them to be close to the basket inside the “restricted area”.  The Rockets have taken 82% of their shots as either three-points shots or shots inside the restricted area this season; the second-highest team in that statistic is only at 71%.  Morey’s team is more efficient with their shot selection and the results have shown: the Rockets currently lead the NBA in wins and rank second in points per game.

As the analytical methods have gained prominence over the past several years, other coaches and general managers have begun adopting a more statistics-based approach as well. The data backs this up – in the NBA overall last year, players shot a record number of three-point shots.  The risks of the analytical-heavy decision-making processes are fairly limited but teams have had varying degrees of success.  Without the right players to employ the analytics-heavy strategy, teams can easily fail to achieve the expected results.  While three-point shots may be more efficient, if a team doesn’t possess any good three-point shooters, this strategy will still fail them.  The trend of more three-point shots has also trickled down to college basketball; just in the past week, we saw Villanova set the record for most three-point shots made in a single Final Four game.

The NBA (and the Rockets in particular) has also received a fair amount of criticism for their style of play.  Fans have degraded their approach as boring and repetitive as the team is frequently attempting similar types of shots on every possession.  For the Rockets as an organization, they shouldn’t be worried about this criticism because as long as they are winning games, they will get fans in the seats.  However, the NBA as a league might have some thinking to do regarding the changing style of play in their league.  At the moment the NBA remains incredibly popular, but preventing the game from being a three-point shooting contest should be a relatively high priority for the league.  One option is to move back the three-point line to make it more difficult and less efficient from a statistical perspective.  However, there isn’t much room on the sides of the court to extend the three-point line; moreover, traditionalists don’t want these elements to change as it will make records and era comparisons incongruent.

Overall, what Daryl Morey has done is both highly innovative and successful.  He saw an inefficient on the basketball court and won over the support of his organization by presenting the analytics justification for his methodology.  The lingering question: how sustainable is this success?

See this YouTube clip for a 60 Minutes segment on basketball analytics:  https://www.youtube.com/watch?v=BHuZc9lQ5ss 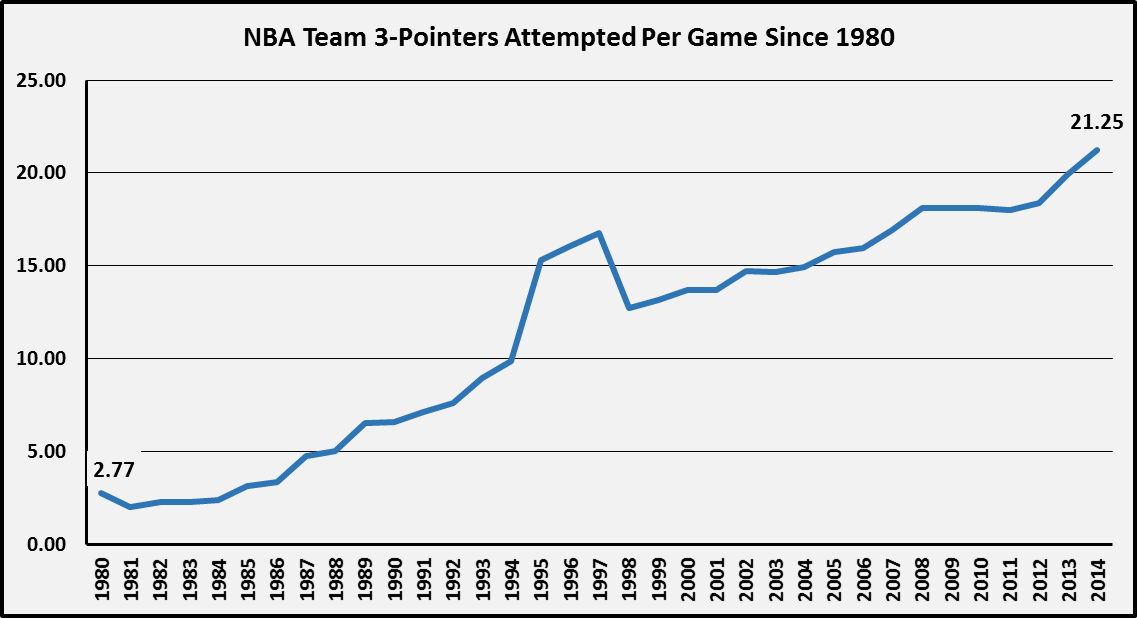 Student comments on Moreyball: The Houston Rockets and Analytics