Mindshow is an app that lets you create, share and experience shows in VR.

Through an intuitive user interface, you can choose the scene, props, characters from a library, and then bring them to life, by physically acting out their movements and recording the performance. 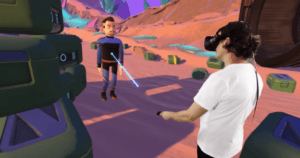 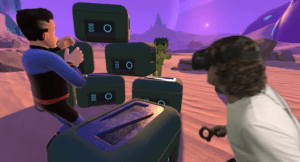 Once your movie is done, you can share it with others on social media, and similarly watch and experience others’ movies.

It actually looks pretty fun (and I’m quite skeptical of most things VR…) As one reporter observed: “There’s something inherently powerful about seeing a character with your voice and movements play out a scene in an environment that you can control.”

The thing that makes this so interesting is the thoughtful space in which it plays. Unsophisticated users can piece together an animated, immersive experience, using their own voices and gestures in a way that looks great and used to be only possible for a small group of highly technical people. The democratization of content creation is creating huge value for both individual creative users, and the VR ecosystem as a whole. Analysts have observed that the dearth of high quality content could be extremely detrimental to VR’s early growth, and MindShow gives creators the tools to begin expressing themselves. Additionally, the social component, and the future platform potential for a company that allows users to easily create VR content is reminiscent of YouTube. By creating an environment where you can simultaneously create and share content, they are building a community of users who will inspire other creators in the ecosystem, and so on.  Already, the content on their community platform is quite entertaining. I can only imagine how funny it could be seeing my friend’s voices and gestures in a character. This raises a concern however… why does it need to be VR? Why not on a TV like a traditional movie? I imagine engagement would be higher if users didn’t have to wear an uncomfortable, fatiguing and sometimes nauseating…

Because everything is animated, there is no crossing of the “this looks a little too real” threshold for virtual reality. By not aiming to be representative it sidesteps significant technical complexity, and provides a “good enough” solution for early adopters, and one that is highly accessible to even tech unsavvy users.

Over time, as input devices for VR continue to advance, we may see advances in character representativeness as we have seen in the video game industry (e.g. think FIFA, Madden, etc.). At that point, combined with haptics, tools like Mindshow will bring VR to a place where it can really shine. Indeed, it will be a whole new way to tell stories.

Currently, as a startup, having users trial the Alpha product version for free, there is no public information on how well they going to be able to capture value. My guess is they play the platform strategy and begin advertising (a la YouTube) at scale (if they reach it.). Alternatively they may also charge subscription to the service, although that would likely dampen adoption.

There are a few main things that they could do to increase their likelihood of success:

Admittedly it is still early days for the company, and there are a lot of market and execution risks. Hopefully Mindshow can find a way to navigate the challenges and become a great, engaging content creation platform for VR.

Mindshow turns you into a VR actor in your own production