The undisputed king of LatAm e-commerce, MercadoLibre (“MELI”), has come a long way since 1999 when founder Marcos Galperin drew up a business plan while getting his MBA at Stanford’s Graduate School of Business. Over the last couple of decades, the marketplace expanded to 18 countries and became the leader in Argentina, Brazil, Chile, Colombia, Costa Rica, Ecuador, Mexico, Peru, Uruguay and Venezuela thanks to unique visitors and page views (1).

MELI operates as a 3P marketplace, where 212mm registered users can purchase new and used products from 10.1mm unique sellers through fixed price or action-based formats. The parallels to eBay’s model are no coincidence; in 2001 the two formed a strategic partnership that granted eBay a 20% stake in MELI (2). The choice to go 3P as opposed to 1P (retailing) was crucial for scaling the business without locking up too much capital in inventory, a costly investment for high interest rate markets such as Brazil and Argentina (3). The decision was further validated when the former #1 player in Brazil, B2W, switched from a 1P to 3P model after investors grew impatient of its growing cash burn.

MELI’s solution was launching its own shipping arm Mercado Envios, giving sellers the opportunity to store inventory in its leased warehouses and benefit from MELI’s ability to negotiate lower shipping rates with service providers. While the service is admittedly limited when compared to Amazon’s FBA offering, the company has plans to continue investing in its fulfillment services.

Moreover, like Alibaba’s experience in China, MELI had to overcome the friction of low banking penetration and fraudulent activity. MELI’s solution was to establish its own integrated payment platform, MercadoPago, which allows users to electronically pay for items through options such as migrating funds from bank transfers, credit cards, and cash, etc. It has further expanded its fintech offerings to include offering customer financing and merchant online lending. 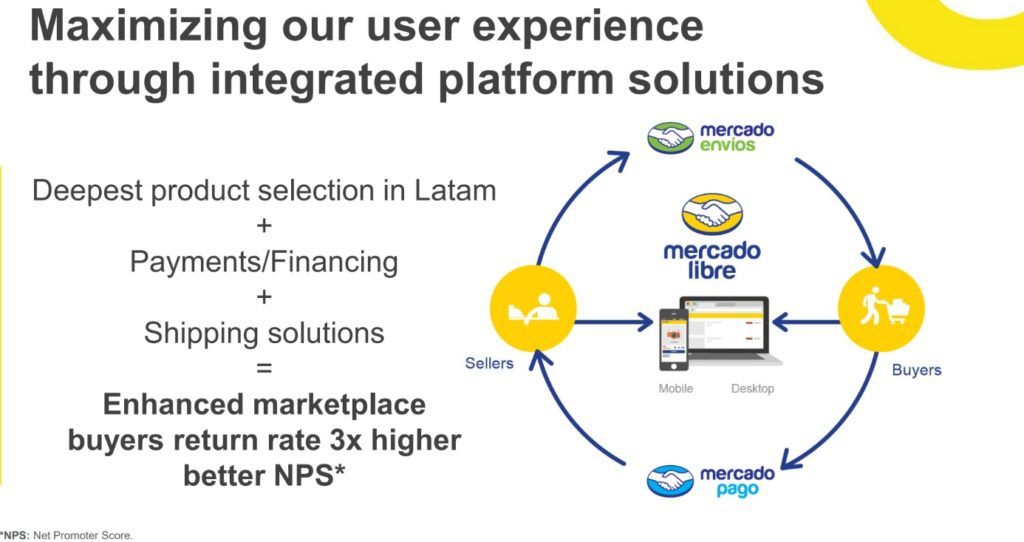 MELI monetizes its platform by charging sellers a commission on items sold, ranging from 0% for free listing to 11-16%, depending on financing and fulfillment services provided. As MELI layered on value added services such as Mercado Envios and Pago, it slowly increased its take rate (or % gross merchandise value), essentially taking a slightly larger slice of a more valuable platform (6). 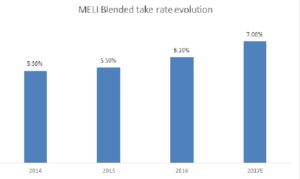 However, MELI’s ability to continue to extract more value from the platform is being challenged by none other than Amazon, which recently launched a stronger push in the region. In 2017, Amazon launched its famous Prime service in Mexico and in 2018 local newspapers in Brazil reported that Amazon was planning on investing in a 50k sqm warehouse facility to broaden its offering in the country (7).

As battles in India and Japan’s e-commerce markets proved, the best defense against Amazon is an offense that prioritizes growth over profitability. To strengthen its moat, MELI is looking to make its platform as big as possible until Amazon becomes a serious competitor. MELI cranked up spending, most notably by subsidizing shipping costs in Mexico, Brazil and now Argentina. The move spurred growth rates of 46%, 68% and 126% in items sold in Argentina, Brazil and Mexico as of 4Q17, and EBIT margins fell to 4% in 2017 from a high of 35% in 2012 (6). However, MELI’s best defense may be to expand the scope of MercadoPago. Latin America has been a peculiar market in that offline retailers such as Lojas Renner in Brazil and Falabella in Chile have (at least for now) thwarted the threat of e-commerce by growing their financial service arms. Credit cards, insurance products, and bank accounts make their customer accounts stubbornly sticky, which may be another reason for why online penetration rates remain so low. MELI may never reach Amazon’s logistical prowess but creating a strong financial ecosystem may give David a formidable advantage vs. Goliath.