When Long-Term Capital Management (LTCM) started its operations in February 1994, its stated value creation was quite attractive. Based on quantitative models generated by several brilliant minds including two Nobel Prize winners in financial economics. (Myron Scholes and Robert Merton), six partners with academic pedigrees linked to MIT and/or Harvard, the company was about to exploit the deviations from fair value in the relationships between liquid securities cross nations and asset classes.

The team had not only extraordinary academic pedigree but also many of the LTCM partners were former members of the very successful Salomon Bond Arbitrage group. The goal was therefore to profit from the academic’s quantitative model and the trader’s market judgment and execution capabilities.

They would create order out of chaos.

Although the company was organized as a hedge fund and therefore had very few disclosure obligations, the statistical model behind its value creation had to be persuasive enough to amass $1 billion between November 1993 and February 1994 when it started trading.

LTCM’s main strategy was to make convergence trades. These trades involved finding securities that were mispriced relative to one another, taking long positions in the cheap ones and a short position in the rich ones.

The basic principle of LTCM strategy was that in the long term, the price of a security would converge to its fair market value even though there may be mispricing in the long term. 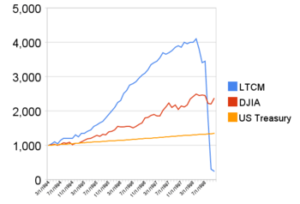 LTCM strategy was not only not disclosed and hid behind the opacity typical of hedge funds but also had had a uniquely high level of complexity. At the basis, several types of trades had been identified and presumably back tested as providing a perfect negative correlation and creating a riskless portfolio with a positive return.

What are the possible root causes for the failure of LTCM?

“Risk is based on the assumption of the existence of a well-defined and constant objective probability distribution which is known and quite possible. Uncertainty has no scientific basis on which to form any calculable probability.”