Mobile live streaming/broadcasting has recently swept across globe and become a trendy and innovative communication interface. It creates new roles for market participants and enables content creators, merchants and platform owners to commercialize through the platform.

In China, the earlier wave of live broadcasting application kicked off from the PC side in 2009 in gaming arena, but not until the mobile live streaming became available thanks to the cheaper and faster broadband offering and higher mobile penetration did live streaming really go spiral in 2015. In this article I would like to discuss a Chinese company called YY. It was a winner on the PC live streaming market but has lost its turf during the industry’s transitioning to mobile– it built the earliest and largest ecosystem on live broadcasting (c.100mm MAUs), has incomparable scale on the PC business. However since the emergence of mobile live streaming, due to the lower entry barriers of apps technology, exploding original content creators and massive investment from incumbent big tech companies, YY was left behind.

YY is an interactive social platform that engages users in real-time online through voice, video and text on PCs and mobile devices. It empowers one side of the users (hosts/performers) to create original contents such as music shows, games, and dating shows in their own “show rooms”  via YY’s PC platform and attracts the other side of the users (mainly viewers) to watch the show and interact with the show hosts by giving out virtual gifts purchased through YY platform[1]. The way YY makes money is through splitting currency denominated gifts with the hosts at 40:60 roughly. On the PC platform, with its first mover advantage, YY gained the benefits of the scale – which is important to show hosts – the more MAU the higher income. So churn on the hosts for YY have been lower. The platform was disruptive and “addictive” from the inception given 60% of internet users in China are male [2] who are the main customers for online gaming/dating/show watching.

There is also a second special component about YY’s ecosystem which is that >50% of the hosts are managed through agencies (so called guilds) who help with maintaining the turnover of the hosts and quality of the contents. This ensures a stable revenue share ratio from popular hosts and enables better planning on new monetization means such as planting ads into the shows.  Because of the quality of the contents, the paying users on YY PC platform have been very sticky.  I categorize the introduction of the entire ecosystem and platform into China as an Architectural Innovation.

However, since 2015, mobile live streaming started to take off due to aforementioned reasons. Over one night there are c. 200 live streaming apps available on mobile. Mobile allows longer and more frequent user engagements hence higher value for the hosts.  More hosts can get on line using the fraction time leading to the democratization of the content creation. Increasingly, good contents/hosts gain bargaining power. The incumbent social media mobile app players are able to capture the value directly by introducing live streaming functions and leveraged their existing community; deep pocket and well capitalized companies also encroach the field through different verticals, i.e entertainment show, celebrity show, even online education by partnering with TV network, schools and celebrities. Viewers turnover start to increase. The guild model handicapped hosts and YY’s agility to innovative show formats. Hence YY missed the early momentum.  In the meantime, its traditional hit show also appears reaching the tail of life span demonstrated by a landslide in MAU in 2016 [3] . All of these have resulted in a comparably slower growth and lower profitability 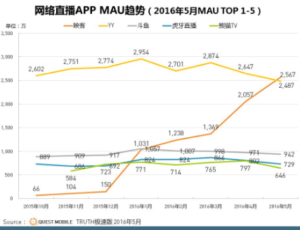 In response to these new challenges, YY launched a new mobile livestreaming app Huya which focused in gaming, whilst their own PC platform also have a mobile app now with some overlapping verticals. The future of the mobile live streaming industry in China will continue to grow, however with more players and capital, YY needs to develop a disruptive strategy on mobile in order to capture the value. It still has the largest PC user pool hence there is some scale benefits to leverage.

Snapshot of the live streaming screen 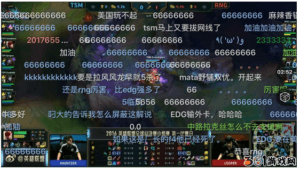