As the Covid-19 epidemic disrupts the entire world, the main resource to fight the spread of the disease has been the adoption of stay at home and social distancing regulations. One of the industries hit the hardest by this is live sports and entertainment. Even as quarantines are lifted, it is uncertain how people will react and whether they are willing to sit in a stadium surrounded by thousands of other for quite some time. One of the companies that has felt the impact of Covid-19 is Live Nation.

Live Nation (NYSE: LYV) is the largest entertainment company in the world, with over 586 million users served in 2019 across 46 countries. Incorporated in 2005, the company merged in 2010 with Ticketmaster to form Live Nation Entertainment. LYV operates in may spaces within the live entertainment industry, live music events, music venue operations, management and representation services to artists, ticketing services and advertising sales.

However, the main sources of revenue for the company are their production of live music concerts, organizing more than 4,000 events last year and the sales of tickets through their ownership of Ticketmaster, with over 485 million tickets sold in 2019 alone1.

As the pandemic hits many companies across different industries, Live Nation has been impacted arguably more than most others. More than 8,000 concerts and festivals have been impacted since March (6,500 events postponed, and 1,500 events cancelled). Additionally, after taking severe criticism for its refund policy only including cancelled shows at first, they were forced to revise and include postponed events as well. This has all led to their stock taking a very severe hit in the past few months, with their share price dropping 40% since the impact of Covid-19 started being felt.

On top of the uncertainty of when restrictions on live entertainment will be lifted, and of the impact this will have on people’s willingness to attend live entertainment events in the near future, LYV has had to return a lot of future revenue it had already collected for events to come. Live Nation alone has had to return more than $80 million for events that they had organized themselves but that had to be postponed or cancelled. Live Nation is only one of many organizers for which Ticketmaster sells tickets. 50,000 events with tickets sold through Ticketmaster have been cancelled, and the company has already returned more than $400 million for 60% of these2.

How to move forward

There is no denying that Live Nation will be significantly impacted in the near future, but that doesn’t mean that there are things they can do to mitigate it. This gives them an opportunity to engage in one of the fastest growing forms of entertainment, interactive live streaming. This differs from traditional live streaming, which is hard to monetize because the experience of watching live is not very dissimilar from the experience o watching a prerecorded version. By making the audience participate and engage with the event in real time, it gives them an inventive to subscribe to the platform and helps differentiate the experience from simply watching an old concert of their favorite band on Youtube. 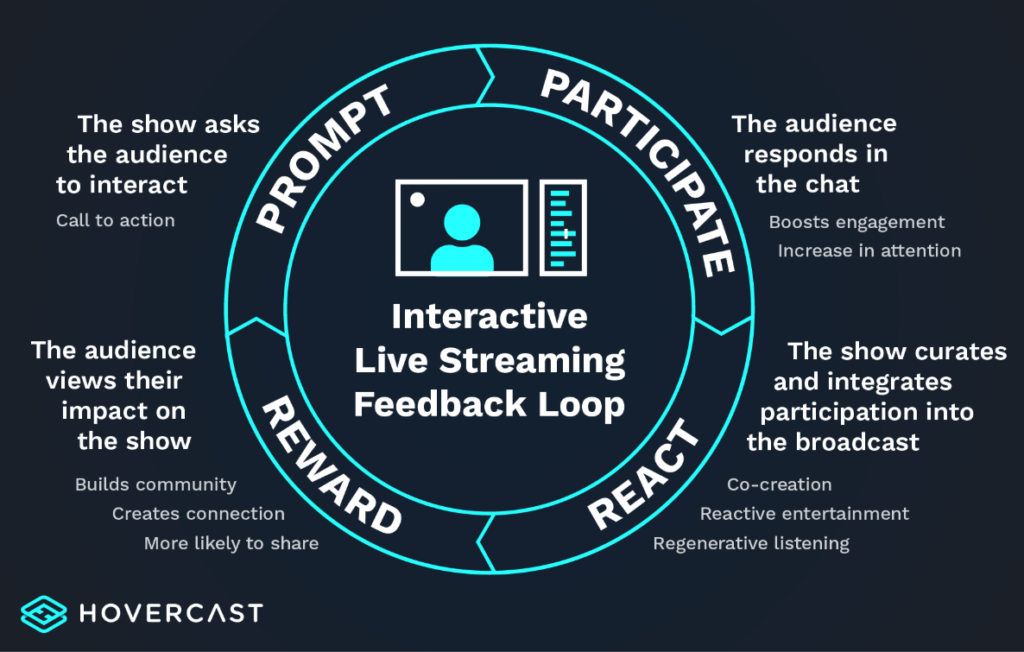 Live interactive streaming has already demonstrated that it can attract a wide audience and generate revenue. In China, live streaming revenues are already generating several billion3 from sources as diverse as entertainment, gaming and Ecommerce. In the US, Facebook and Instagram lives, as well as gaming platforms like Twitch have paved the way for live interactive streaming to be part of the mainstream, with streams such as Twitch Plays Pokemon reaching 1.1 million active players at a time4 simultaneously controlling a game.

However, this technology hasn’t only just started to be exploited in the live music space. John Mayer has used live interactive streaming on many occasions in which he answers users’ questions and he has begun to stream live in his dressing room during intermissions of his live concerts. We’ve seen EDM artists create virtual live listening parties that are later included in their EPS5.

There are many use cases in which users could interact with performers during live streaming. Users could interact with artists during live performance by giving feedback on which songs in an artist’s discography they would like to hear and even as to what the best version of performance of that song they would like to listen to. Users could participate in selecting the visuals that accompany an artist or a song best. Live interactive streaming is also an opportunity for artists to collaborate with each other, for the audience to select which artists they would like to pair to listen to together without the constraints of tour dates and different geographies. And, in the most extreme of cases, the audience could even collaborate with the artists in creating the actual performance from their homes.

Streaming allows Live Nation to organize events without concern for the capacity of a venue, conflicts with dates and geographies for their artists, weather for outdoor events, and even local regulations limiting how an event can be organized.

There is no denying that Covid-19 will be a huge blow to the live entertainment industry in the years to come. Its uncertain when social distancing ordinances will be lifted, and even more uncertain when people will feel safe again to be surrounded by thousand of others listening to their favorite artists.

Nothing can replace the magic of listening to your favorite artists live, of seeing them interact with the audience, of hearing thousand of peoples chanting to the same song, but that doesn’t mean that we can’t enjoy watching our favorite artists in real time, through our screens.

It is undeniable that LYV’s revenue will be impacted in the short term. But live interactive streaming can help alleviate some of the load. It has proven its value in other spaces of the entertainment industry. It’s making an impact in gaming, social media an Ecommerce. This is an opportunity for it to start making waves in live music as well.

Airbnb: To be, or not to be

The future of Harvard Business School Online: Disrupting or being disrupted?

Student comments on Live Nation: how to reproduce the thrill of live music from the comfort of your home