Linux’s history in the platforms that it is active provides insights into what influences winning and losing in an environment driven by network effects.

Linux has had extraordinary results with servers, but its desktop systems have been a complete failing It was also quite successful in mobile as the basis of the Android OS. Indirect and direct network effects largely explain those differences in adoption across its products. 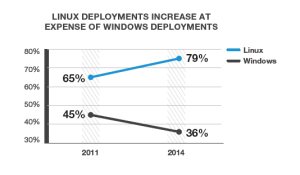 The value proposition seems very clear: “make it good, and make it free”. In the context of a product aimed at a somewhat more refined customer – an enterprise deploying a complex technical solution, it is clear why such a value proposition could lead to success. But while beating Windows under those conditions appears intuitive, why was Linux able to beat other Unix-based system that were being developed in the nineties? The answer isn’t clear, but certainly that question is being discussed within the tech world (see e.g. this blog post on why Linux beat other open-source solutions) . It seems like beyond network effects, it’s about finding just the right product that will talk to users, requiring a good dose of skill and luck – and from there leverage network effects to become the dominant player. In the server utilization, I do not expect major changes in the near future. Mainly, I believe that version compatibility constitutes a high barrier to switching, and the technical / functional nature of the application reduces the incentive to switch as long as it works, I see this market as much less fickle than many other modern platforms targeted at the end user.

If Linux is such a good product and free, how can we explain it having <1% of the market share in the desktop world? To me, again, the product itself is the number 1 cause, and network effects have amplified market reactions to make it one of the biggest losers in that world. The main issue is: Linux could be user-friendly, but really, it just isn’t. Linux just never got the necessary momentum to start growing fast from a small user base. No matter that it is free then, a product that doesn’t meet users needs will always struggle to take off. The fact that few hardware today is built for Linux further disincentivizes users to buy, and complementors along the chain – hardware manufacturers, retailers to make it easy to buy a Linux-equipped laptop. There have been a few attempts from enthusiastic customers to broaden usage of Linux as a desktop operating system. Most notable perhaps is the city of Munich’s decision to switch all official city computers to the Linux operating system. Munich’s experience though makes it clear just how strong network effects are at preventing any possible growth, and indeed perhaps forcing users of the minority platform to switch back to the majority platform, i.e. Windows. The major point of course is compatibility – when platforms are made proprietary, cross-platform collaboration can become so complex that the incentive to switch back becomes very strong. After a re-evaluation of their choice last year, Munich is staying on Linux, for now. Meanwhile, in the rest of the world, Linux for desktop has been dead for a while, and the comeback won’t be anytime soon.

Student comments on Linux won the servers, but dead on desktop