Jeff Stewart and Richard Eldridge were working in the Philippines when they noticed a confusing trend. Their staff members were frequently asking for loans, but they were young and skilled employees with ostensibly low risk profiles. When the two dug deeper, they realized that it was emblematic of a larger problem: a growing middle class, composed of over one billion people worldwide, who could not access credit and were under- or unbanked. So, in 2011, the two founded Lenddo, to “improve lives of the emerging middle class in developing countries by providing micro loans for specific purposes.”

Traditional financial institutions, like banks, were unwilling to serve this group because they could not evaluate their risk profiles based on little to no credit history. In many developing countries, mobile and social media use is on the rise, which offers a perfect source of data that has no shortage – social media data. With the permission of the individual, Lenddo connects to social media networks, such as Facebook, LinkedIn, Google, Twitter, to form a profile of an individual and to assign a LenddoScore, “a powerful predictor of an individual’s character or ‘willingness to pay.’”

At first, Lenddo developed as a microfinance organization, making loans directly to individuals and tapping into social networks. The organization focused on the direct-to-consumer relationship, strengthening their algorithm and understanding of how social reflects creditworthiness. Available in the Philippines and Colombia, individuals identified people in their networks, such as Facebook friends, to vouch for their creditworthiness. With permission, the Lenddo software then examined their interactions on social networks to confirm that the social connection existed. To ensure accountability, Lenddo leveraged the power of social pressures. If the borrower defaulted on the loan, the friends’ credit scores were also negatively impacted. By March 2014, Lenddo had issues 10,000 loans and proven that the LenddoScore was an accurate predictor of creditworthiness. In this early iteration, Lenddo created value for typically underbanked or unbanked individuals by giving them access to credit. In exchange, they captured value by building up a base of users whose data fueled their algorithm. As we have seen with network effects, their technology only improves by gaining more individuals on the platform and by collecting more data. 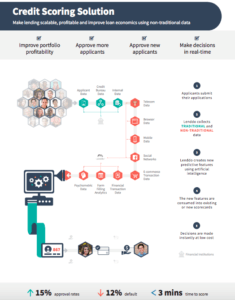 Lenddo has since pivoted to a B2B approach. As banks have become more comfortable with the idea of using nontraditional data to inform credit scores, Lenddo now partners with financial institutions to license out their technology and credit scoring products. In January 2015, Lenddo opened their products (LenddoScore and Lenddo verification service) to third party institutions, such as banks, FICO, Experian, and CRIF. Through this model, Lenddo creates value by offering their proprietary technology to financial institutions that serve individual customers. It also aligns with their mission to help the growing middle class access credit, because they are able to reach more people than if they were to directly offer loans themselves. While data isn’t available on the exact terms of licensing out the technology, presumably Lenddo captures value via some fee charged to these institutions. For Lenddo, this is a smart move as well because they shift to recurring, large payments, rather than scraping minute basis points on individual loans.

Most recently, in October 2017, Lenddo announced a merger with Entrepreneurial Finance Lab (EFL), which offers psychometric scoring and was originally a research project out of the Harvard Center for International Development. Under the umbrella of #include1billion, the combined organization strives to provide financial inclusion to the one billion underserved people worldwide. So far, the two organizations have enabled more than 5 million credit assessments and $2 billion to be disbursed to previously unbanked people. They plan to continue focusing on developing markets in Asia and Latin America.

Currently, psychometric and social data is used as a complement to traditional credit data. However, as these new forms of data are increasingly used to evaluate people, it will be interesting to see where people draw the line at data privacy. Like companies reviewing social media accounts during hiring processes, it can feel scary to people that their online presence will begin to play a role in financial decisions.