Li & Fung- The Downfall of a ‘Perfect Platform’

On March 6th of this year, the supply chain management giant Li & Fung (L&F) will be unceremoniously removed from the Hang Seng Index, a globally recognized index of Blue Chip Hong Kong Companies, to be replaced by Greely Automobile.[i]  It will mark the another step in the steep decline of a company which was once synonymous with outsourcing and cheap Asian manufacturing in the US.

Li and Fung had perfected a platform of outsourced manufacturing, connecting large western retailers to a vast network of factories throughout China and southeast Asia.  Going a step beyond simply placing orders on the retailer’s behalf, L&F provided unmatchable speeds by breaking orders up and placing individual specifications to numerous disparate factories based on available capacity.  This system had the mutual benefit of providing the factory owners with ever increasing utilization to spread their fixed costs over, while providing their retail customers reliable access to cheap manufacturing. [ii] 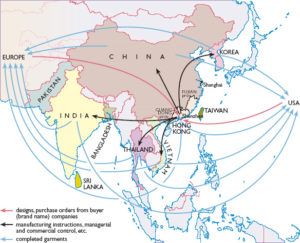 Li and Fung traces its history back to the turn of the 20th century as a brokerage firm provide translation services for traders operating between the United States and China.  After one of the founders’ grandsons, Victor Fung, left his job as an HBS professor in 1976, he returned to Hong Kong and along with his brother turned the company into an indispensable piece of the globalization of manufacturing.  [iii]

They began this by connecting western firms to their growing network of factories throughout China.  In the earlier years, this was as simple as connecting single companies to single factories for orders, however as L&F became more sophisticated they began cementing their role as a platform instead of intermediary by breaking up customer orders.  With a deep knowledge of their network of factories, L&F quickly learned they could expedite customer orders by slicing it into smaller groups and sourcing them individually to factories which had available capacity.[iv]

This ingenuous system revolutionized retail outsourcing in the 1990s.  L&F could guarantee deliveries of massive orders in weeks, where previously it would have taken months.  Likewise, factories throughout L&Fs network began to recognize huge increases in profitability through the uptick in utilization.  Importantly further, L&F’s system broke up each order into a unique supply chain for that specific experience that was cobbled together for this one order, nearly erasing the ability for a customer to go direct to their suppliers and cut out the intermediary.

L&F took a vested interest in ensuring that their network of suppliers was reliable and capable of handling the orders they received.  L&F therefore inspected individual factories and provided a tacit seal of approval by incorporating them into their supplier network.  This seal of approval became so valued by factory owners during the 1990’s that many accepted extremely coercive terms to join.  As the suppliers network grew, so too did L&F’s relative market position to dictate terms to retailers.

By 2010, the company began to face troubles.  Raising costs in Chinese manufacturing, L&F’s primary region of suppliers, forced the company to chase cheap manufacturing trends to Vietnam, Indonesia and Bangladesh.  With less expertise in these regions, L&F struggled to replicate their successes of the 1990s and profits soon began to drop.[v]

Even more concerning, in a string of accidents between 2010 and 2014, a number of factory workers were killed in fire and collapses in what many including the New York Times described as ‘sweat shop’ style conditions.  Supplier vetting had once been a hallmark of L&F, reassuring customers that their products were being produced by a reliable and quality manufacturer.  The push for geographic expansion in the 2000s appeared to have reduced L&F’s ability to inspect and monitor their network, removing a major source of value creation their platform provided.  Responding to investor and customer pressures in the West, a number of retailers began curtailing their orders through L&F in the aftermath of these incidents.[vi] 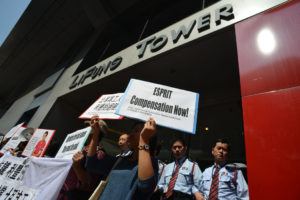 By 2017, L&F has been reduced to a shell of its former self.  It appears that the reduction in information asymmetry between retailers and suppliers has allowed a number of customers to remove themselves from the L&F platform and still recognize cost savings through cheaper offshore manufacturing.  The rise of Alibaba in China, and to a lesser extend Amazon, has provided L&F’s network of manufacturers with alternative options to fill capacity gabs, greatly reducing L&F’s bargaining power.  While the future is still unknown for the survival of the company, their recent removal from the Hang Seng Index symbolically represents the end of their golden age a perfect supply chain platform. [vii]

Medium: creating a new writing platform for the masses

Student comments on Li & Fung – The Downfall of a Platform