This is the story of a company with very strong ambitions of local growth. Outside of France, people rarely heard of the name “Le Bon Coin” (in English “the good corner”), but it would be hard to find a single Frenchman that has not heard of it. Le Bon Coin is the largest classified ads website in France, often ranked in the top 5 in terms of traffic, with about 30 million monthly unique visitors (around 45% of the French population!), and over 70% of the population has already browsed the website.

This is also an unexpected success story. The website was founded in 2006 by Schibsted, a Norwegian conglomerate, as a simple service to resell consumer goods and domestic appliances such as washing machines or strollers. A mundane model that existed in other parts of Europe as well. But it diversified into used cars, and this is where it became a French phenomenon. Since then, the website has had dramatic growth, and now boasts around 233 million euros of annual revenue. 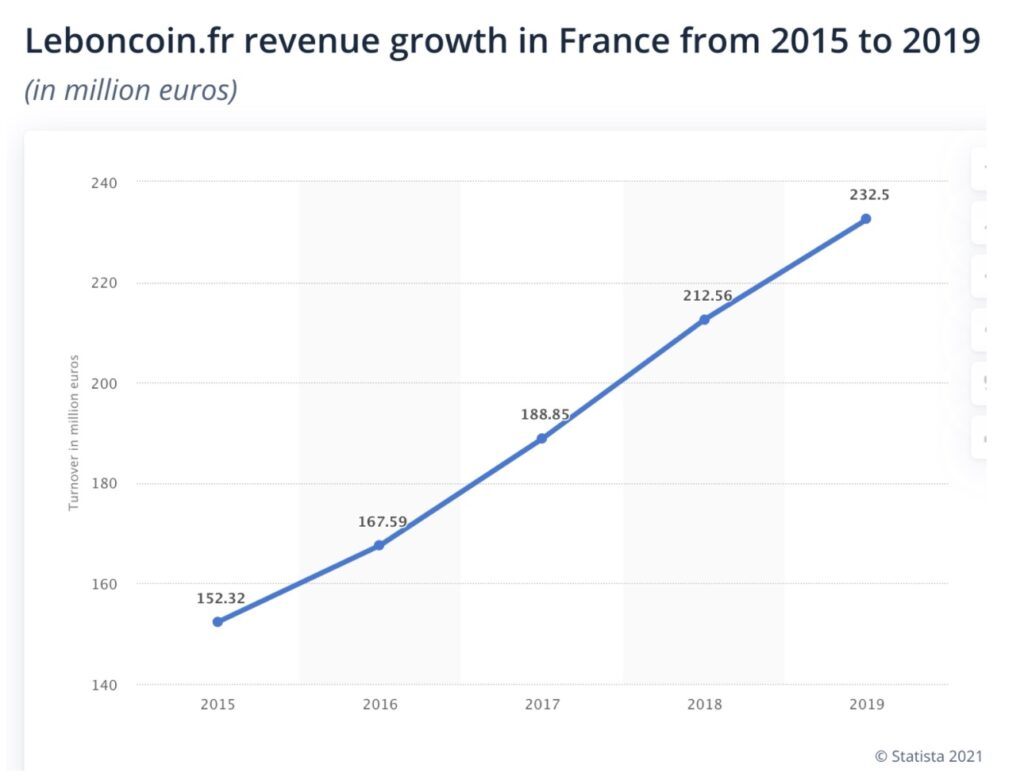 The uninitiated might easily compare it to the French version of Craigslist, but Le Bon Coin’s platform is so much more than that: it distinguishes itself by its usability and an innovative freemium business model, with multiple sources of revenue and types of users.

Let’s take a look at what makes the website so engrained in French society, and how it managed to build a little empire by establishing trust in everyday transactions.

One major advantage that Le Bon Coin has compared to several similar competitors, is that it is free to use. Anyone can post an ad without being charged, so there are little to no barriers for people to become users. Additionally, the website is so diversified that people can use it to sell objects like small toys or used cars, but also apartments or luxury goods, which makes the target customer segment almost as large as the entire population. Services like holiday rentals or repair jobs are also a big category that drives the website’s success.

But Le Bon Coin did not stop there and is also one of the top platforms for companies to post job offers, similar to Indeed. In 2020, it claimed that more than 800,000 French people found a job via the platform.

Le Bon Coin does not make money when a user posts an ad, nor does it take a commission when they make a transaction. The main revenue stream is sponsored ads. The platform quickly realized that the most efficient and fair way to generate revenue is to monetize visibility. There are more than 40 million classified ads on the platform at any given time, which makes paid sponsoring almost essential for anyone looking to sell their good or services quickly.

Let’s examine the secret recipe for Le Bon Coin’s success. The platform’s value proposition is relatively straightforward: enabling anyone to find and sell goods or services to people in their neighborhood, as easily and reliably as possible, thereby saving a decent amount of money.

Although making good deals is undoubtedly the main motivation for users (which is a particularly strong motivation for higher-value purchases, such as cars), usability is one of Le Bon Coin’s main competitive advantages. It is arguably the first intuitive classified ad website: it is made to not overwhelm the user with ads that are not in their specific location or are not a close match to what they are looking for. Everything is made to create a feeling of proximity. The home page is minimalist and functional, with a search bar (to select a particular category of service or items) and a map of France (to only see items/services close to the user’s location).

However, the key reason to the platform’s success, and where it creates the most value, is in establishing trust. Classified ad platforms are often infamous because of the number of scams that they can include. Le Bon Coin has taken several steps to avoid scams and gaining consumer’s trust. First, it has an optional secure payment feature that users can activate so the payment is made only when the order is received. Secondly, it uses an algorithm that automatically blocks ads that seem suspicious (for example, if a user posts an ad for a €3,000-car, the system will not allow the user to publish it). Thirdly, all sellers are rated and reviewed by the buyers, and all prospective buyers can access each seller’s rating and past reviews (similar to the Airbnb model). These 3 features may seem common in today’s platforms, but it was unprecedented in the classified ads space. The platform’s founder perfectly spotted that there was a gap in the market and knew how to exploit it effectively.

Le Bon Coin is inherently scalable, as anyone can post and browse ads for free, and most of the moderation is made automatically. To further increase its revenue streams, the platform recently developed a set of paid B2B services, including job postings, integration with internal HR platforms, and advanced advertising services (by leveraging the tremendous amount of user’s data including consumer behaviors, willingness to pay for each product types… etc).

To conclude, Le Bon Coin managed to create a whole new platform-based ecosystem that answers the need of buyers, sellers, and companies. The pandemic has further increased its popularity, especially during lockdowns, when shops were closed. It also benefitted from the increasing global awareness of the damages of overconsumption by having a clear message and vision as a pioneer in the circular economy.

Leboncoin – one of the most popular websites in France, https://www.thegoodlifefrance.com/leboncoin-one-of-the-most-popular-websites-in-france/#:~:text=Leboncoin.fr%20is%20one%20of,goods%20throughout%20the%20whole%20country.&text=There%20are%20millions%20of%20items,the%20bizarre%20to%20the%20brilliant.

Student comments on Le Bon Coin: The secrets of a local business model