In the summer of 2009, Kraft launched a more spreadable version of its 80+ year old Australian favorite Vegemite. Kraft decided to have the public name the new combination of cream cheese and the original spread. The company thought it would be a great way to get consumers to try the new version, garner additional buzz around the launch and strengthen their bond with existing customers. In fact, the original Vegemite name was also chosen through a public competition and the very idea for the new formulation was a result of the interactive “How do you like your Vegemite” campaign. What better way to name the new version? 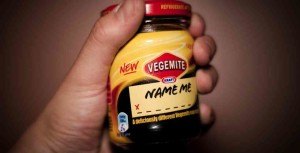 Kraft launched the first naming contest in June 2009 by putting the new spread on the shelf with special “Name Me” packaging. On paper the contest seemed like a smash.  Kraft received over 48,000 entries from across Australia and sold over 3 million jars during the three-month contest.  The success of the contest was short-lived, however. Kraft was met with immediate and widespread backlash after they revealed the winning name, iSnack 2.0, during the nationally televised AFL Grand Final.

Vegemite loyals were offended and took social media to voice their outrage. Consumers posted thousands of comments on Facebook and Twitter, proclaiming iSnack 2.0 the “worst name for a food condiment I’ve ever seen” and making #vegefail the number 7 trending topic on the day the new name was announced. Hundreds of YouTube videos were uploaded and a website dedicated to “Names that are better than iSnack 2.0” was created.

Kraft spokesperson Simon Talbot revealed that the name “Vegemite iSnack2.0 was chosen based on its personal call to action, relevance to snacking and clear identification of a new and different Vegemite to the original.” But even Dean Robbins, the 27-year old web developer who submitted the name, admitted that “It was all a bit tongue-in-cheek, really. The ‘i’ phenomenon and web 2.0 have been recent revolutions and I thought the new Vegemite name could do the same.”

In response to the public criticism, Kraft announced in a statement on September 30th, 2009 that they were abandoning the name, just four short days after announcing iSnack 2.0 as the winner.

Kraft quickly turned to the crowd again in an effort to salvage the fate of its new product. This time, they released a list of six (more conventional) potential names and let the public vote for their favorite. After polling more than 30,000 people over the course of a week, Kraft announced the product’s newest name on October 7th: ‘Vegemite Chessybite’. While the final name isn’t exactly inspiring, the process returned control to the end consumer, in turn increasing personal ownership of the end result. With that, the controversy quickly died.

What we can learn:

While this fiasco is commonly cited a classical branding mistake, its unclear if it was actually a failure. Kraft generated a ton of publicity for their new product and sales actually rose in the weeks after the iSnack 2.0 announcement. Some even speculate that Kraft may have done this on purpose in order to drive awareness. Either way, there is a valuable lesson to be learned here: if you ask your consumer to name the product, let them actually do it. Instead of using the crowd to ideate and then choose, Kraft had a panel of marketing experts pick the “winning” name.   In doing so Kraft got the exact opposite of what they were hoping to achieve with crowdsourcing to begin with: a name that the public hated and a lack of consumer ownership over the result. Kraft could have prevented the backlash if they had designed their process in such a way that allowed the crowd to not only present potential solutions but also help choose the winner – especially since they were then asking the consumer buy the resulting product.

Student comments on Kraft’s Vegemite: the 2.0 time’s the charm?