In 2011, Alexandra Chong and Alison Schwartz founded Lulu, a mobile app with a clear and controversial mission: allow women to rate men online. Chong described the female-focused product as a way to gather “all this powerful information”[1] to create a “dating compass” for women. In a 2015 interview, she shared that Lulu was the “number one app in the U.S. for women to do research and review guys. It’s basically making us smarter when we’re dating… we just want to help women find their Prince Charming and do the research along the way.”[2] 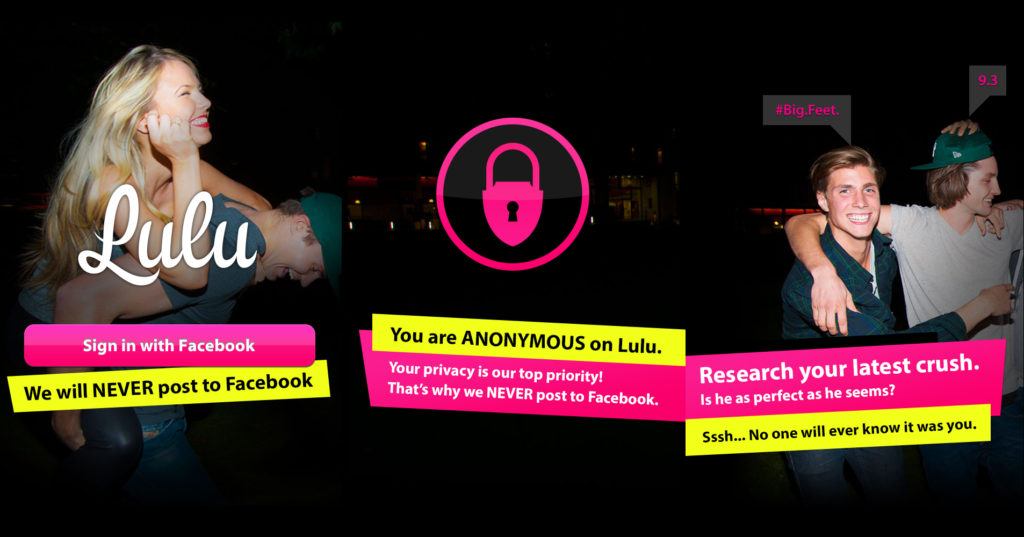 Any woman 18+ could authorize the Lulu app exclusively via her Facebook account. Facebook Login gave Lulu several important pieces of information: first, a person’s gender and second, access to a Facebook friend list. The app used Facebook’s friend graph to add male Facebook friends to the Lulu platform, giving a user plenty of guys to rate and review via a multiple choice quiz (with questions on manners, ambitions, and appearance[3]) and quirky hashtags like #WillWatchRomComs or #HatesBrunch. Similar to a star-rating in a Yelp review, each guy received an aggregate Lulu “score” from 1 (worst) to 10 (best); Chong stated that “more than 70 percent of reviews on Lulu [were] an 8.0 or above.” By 2013, Lulu had raised 2.5 million dollars from Passion Capital, PROfounders Capital, and super angels including Yuri Milner and Alexander Asseily (founder of Jawbone). 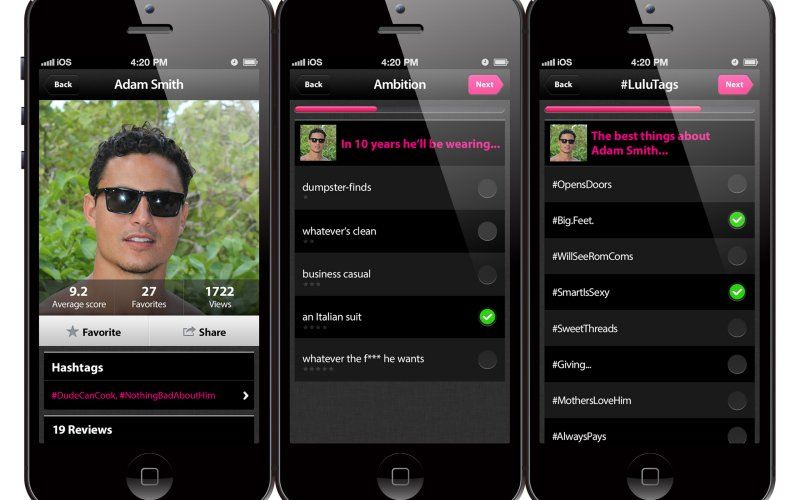 The app first launched under the name “Luluvise” to two colleges in the U.S. Within just three weeks, 60 percent of women at those colleges were using the app and 40 percent of men attending the colleges were available for rating. Early users did some heavy lifting for Lulu, effectively on-boarding male Facebook friends whose ratings became available to the entire Lulu community[4]. After its U.S. rollout, Lulu went international – and within five days of its Brazil launch, hit #1 in the App Store[5]. In 2015, after a flurry of demand, Chong and team built an experience for men that GQ called “Google Analytics for guys”[6].

At the peak of its popularity, Lulu had six million active users, one million of whom were men. Despite its passionate founders, a flurry of press attention, and access to capital (with 15 million dollars raised in total[7]), Lulu’s “little black book” of crowdsourced romantic reviews never quite took hold. Last year, Badoo (a UK-based dating company) acquired Lulu for an undisclosed amount and immediately shut down its rating service. While the act of rating other humans likely feels too polarizing and invasive for Lulu to have ever gone mainstream, two early decisions significantly contributed to the app’s ultimate demise.

The company’s efforts to combat bad actors should have scaled along with its user base, becoming smart enough to detect when a user had set up a fake account for the purpose of breaking into Lulu (for example, a Facebook profile of a “woman” with no photos created two days ago). Identity verification and trust were among Lulu’s core attributes – the app was meant to be a private community for women, so women needed to know that reviews were real but also needed to trust that their reviews would remain completely anonymous. Lulu could not proactively manage the proliferation of fake accounts signing up for its service and, because of this, was eventually banned from the Brazilian App Store. Chong also recalled that because the product was built on top of Facebook it was able to grow quickly, but was also vulnerable to significant platform dependence[8].

Lulu’s overall growth was also inhibited by its aggressive women-only (and “rigidly heteronormative”) policies. When a man tried to log onto Lulu, he was greeted by a message that said “Hey dude, you’re a dude. – Lulu” and subsequently blocked from the app. Years later, Chong acknowledged that even if “you build an experience for women, you don’t have to block [men] from coming in.” Lulu pivoted the product to allow men to opt-out from being featured on the app; eventually, it required men to opt-in to being featured on Lulu at all. After moving to the opt-in policy, Chong observed that most men consented to have a profile created on their behalf and that while five percent did deactivate their profiles at some point, one-third of those men came back within a week. Allowing men from the start would have increased the app’s stickiness and early user adoption.