What have you heard about Kazakhstan, a landlocked country in the middle of Central Asia, in recent years? In recent years it is well known in the context of a comedy of Sasha Baron Cohen, where he pretends to be Borat, a television reporter from Kazakhstan visiting America. Known with a world champion boxer Gennady “GGG” Golovkin or a singer Dimash? After banning the first Sacha Baron Cohen satire comedy, the country, rather than ignoring it, has created tourism ads adopting its catchphrase and turn it into the country’s tourism slogan: “Kazakhstan. Very nice!” However, yet another very nice achievement happening in recent times is an IPO of a fintech platform called Kaspi.KZ (KSPI).

It was listed on the London Stock Exchange in October 2020. The stock opened at $38 per share and traded as high as $46.90 with a volume of more than 4.4 million shares. That’s more than Russia’s Yandex trading volume, which averages 3.8 million per day. The IPO gives Kaspi a market cap of $6.5 billion as of today. It was the second-largest IPO of the year and the fourth largest in all of Europe. It was, being considered a tech company now and not just a bank, totally oversubscribed. Kaspi brought in over $1 billion. For the tiny market of Kazakhstan, the total population of which is only about 19 mln. people, it is a grand achievement in recent years.

Historically in the 2000s, it was a traditional bank that serviced corporates and small and medium enterprises (SMEs). At the time, the banking in oil-rich Kazakhstan experienced prosperous years because of economic growth and oil prices. Global banks had a large interest to buy banks in emerging markets at high valuations. However, after the mortgage crisis in the US, the macroeconomic conditions shifted, the bank started pivoting. The first step was to exit commercial lending (its primary business at the time) and to start transitioning to retail banking (2008) with a mass-market credit card business. Another strategic objective was launching online products starting from the online bill payment system (2012) followed by the first online marketplace (2014) and mobile applications (2017). Eventually, it turned into a technological platform, but still with the brick-and-mortar banking branches across the country. Currently, Kaspi’s market share is 41% in e-commerce, 35% in payments, and 31% in consumer finance with the most popular mobile app in the country.

Pivoting from commercial lending, the mass market customers became a new focus for the company. The overarching objective of the new business agenda was creating and launching products that customers liked. The customer-centricity required a complete re-engineering of the company by widely spread directly responsible cross-functional teams. Before online products were introduced, Kaspi built a wide depositor base and a state-of-the IT infrastructure. All of these components were the essential foundations on which the company started building other businesses. Kaspi’s online payment system, which was free of charge and built around daily household payment needs, became an instant success. The first online products ensured frequent interaction with customers and capturing their feedback for rapid improvements (the NPS was used as a top key performance indicator). 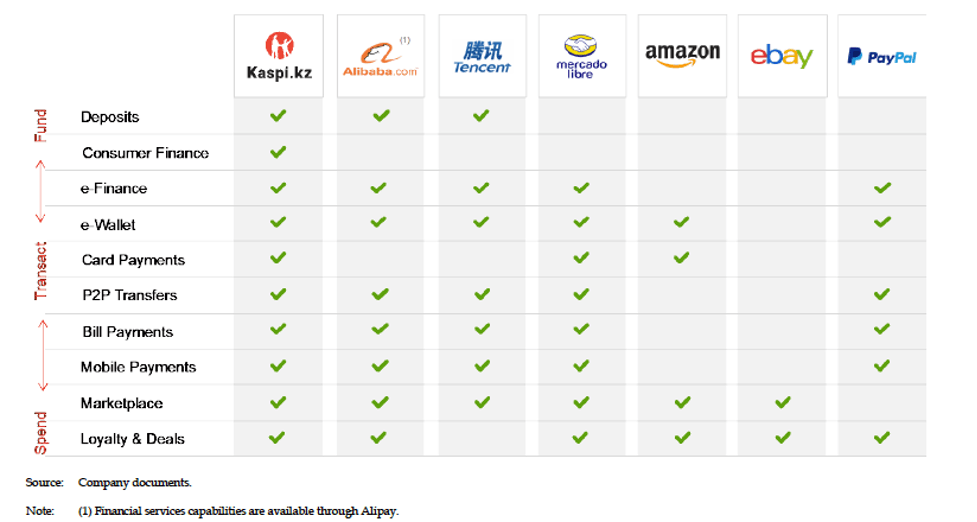 As a leading retail bank, Kaspi was already offering consumer loans even in stores of the largest electronic retailers. However, the objective was to attract consumers to their own online marketplace, which was launched in 2014. The small retailers were attracted by a large consumer base, the largest retailers were reluctant in the beginning but joined after 18 months. The merchants paid Kaspi about 6% of the transaction fee of the amount of purchase, which was transferred from the platform to merchants the next day after purchase. Mikhail Lomtadze, the CEO and HBS MBA 2002 recalls, “Every time a retailer joins us, its sales increase something like 30% with the first two to three months. We drive the volume because we have 5 million customers.”

Having a large loyal customer base, the company rapidly scaled up the business to a large variety of products, ranging from apparel to watches and toys. In partnerships with other marketplaces, such as Kolesa.kz, an online second-hand car marketplace, it launched online car loans. The adoption of mobile app, which was launched in 2017, was tremendously fast. In 12 months, half of transactions went through mobile app. Peer-to-peer mobile transaction and payments was enabled along with the launch of mobile application. Consumers recognized the value immediately; it has now become a standard for C2C and C2B payments for small services and businesses. The platform and payment mobile solutions has reached almost everyone running the small businesses in Kazakhstan, and now even drivers when hitch hiking (yes, you can hitch hike cars right on the curb) are widely accepting Kaspi payments. As a bank, Kaspi did not differentiate in terms of interest rates but the user experience of online products, speed, simplicity, reliability made a huge difference. In the table below, we can see the value capturing model of the platform

Currently, the firm has great opportunities for the further growth. The monthly transactions per active customers are growing 4.6 in 2017 to 6.9 in 2018. The customer retention increased to 92% in 2018. The growing variety of products and merchant network is another avenue for expansion. Acquisitions in neighboring countries will start expansion in Central Asia and Caucasus. In general, the time for IPO was just right. Moreover, the market recognizes Kaspi not as a bank, but rather as a growing ecosystem. Very nice!