When I lived in New York, I used to walk into my favorite Starbucks shop and always see a healthy stock of Jones Soda in the small refrigerated section near the cash register. Waiting in line, I would peruse through the pictures featured on the label of each Jones soda bottle.

If anyone were to ask what I thought about the images, I would have said they looked interesting – neither beautiful nor disgusting. Certainly not professional. Amateurish, in a sense.

I knew that each picture had been taken by some regular person in the world, submitted online, and then voted on by millions of people. By crowdsourcing the design of its labels, Jones Soda was supporting budding photographers and local artists, or at least so I thought.

Interestingly, I never purchased a bottle of Jones Soda or ever felt compelled to go online and vote on an image.

Fast forward to today, and here’s how the company has been doing: 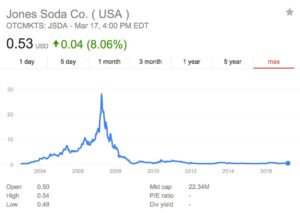 Many factors have led to Jones Sodas’ demise, not the least of which was the shift in consumer habits towards healthier drinks. Additionally,

For contest-based crowdsourcing to be successful, two sides must always be considered: participants (people who submit a piece of work to be voted on) and voters. The main problem with Jones Soda was not that it chose to crowdsource its marketing efforts; rather, it was how the company executed its strategy. Ultimately, Jones Soda’s crowdsourcing approach failed due to two principal reasons: (1) the company did not attract a large enough fan-base of participants and voters and (2) the company did little to encourage high-quality entries. Unfortunately, Jones Soda’s community did not have the scale or talent to compel consumers such as myself to purchase a bottle of soda.

To attract a large pool of participants and high-quality entries, individuals must trust that the contest-based crowdsourcing platform is fair. However, Jones Soda explicitly states that a picture may be chosen to be on a bottle “if we like it” (see image below from Jones Soda’s website) [4].

Furthermore, the management’s selection criteria is unclear. How much of a say do voters really have in the company’s decision on what picture is selected? If participants cannot trust the company’s platform, how much can they trust its mantra, “Jones Soda. Your Photo. Your Soda. Your Brand.” Is Jones Soda really YOUR brand?

Also, there are few incentives to having your picture selected to be placed on a label (outside of personal pride, of course, which for some may be enough). In fact, Jones Soda claims that it does not even send winners a bottle with their label on it. Thus, many individuals whose pictures are selected cannot see the soda bottles with their picture being sold in stores.

So what happens when you don’t have enough high-quality entries? You get this as the photo with the most number of votes: 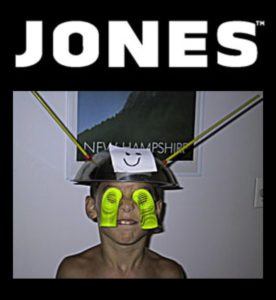 No wonder I was never impressed with the pictures on Jones Soda bottles.

When you have a contest-based crowdsourcing strategy that participants can’t immediately buy into, you also face difficulties attracting people to vote. In fact, the above image only received 261,433 votes.

While Jones Soda’s failure is partly a tale about a poorly executed marketing strategy, it’s also one that highlights two broad challenges with contest-based crowdsourcing.

First, contest-based crowdsourcing can lead to inconsistent brand messaging. Perhaps this is one reason why Jones Soda reserves the right to select a picture for a label that may not have the most number of votes. Still, by leaving much of the company’s product labeling to the public, to be changed on a regular basis, Jones Soda risks creating a brand consumers cannot adequately articulate or understand.

Second, contest-based crowdsourcing can lead to product dilution (pun intended). Jones Soda is known to offer obscure flavors, from Berry Lemonade Cane Sugar Soda to Fufu Berry Cane Sugar Soda (all of its products are cane sugar based). It’s limited edition bottles are even weirder (it is currently offering Birthday Cake Cane Sugar Soda). Many of these flavors were decided on by customers, and many of them were unpopular (see this Time article on Tope 10 Bad Beverage Ideas, which features Jones Soda’s line of Thanksgiving Dinner sodas). Today, it it debatable whether customers know Jones Soda more for producing great tasting soda or for producing soda that tastes just plain bizarre.

What I would do differently

Underlying Jones Soda’s poorly executed contest-based crowdsourcing strategy is an unclear vision, and so the first thing I would do is revisit, rethink, and reinvest people in what Jones Soda stands for. What does it mean for Jones Soda to be “Your Soda. Your Brand.”? Who is the customer? How does Jones Soda support her/him?

Next, Jones Soda needs to create value for participants and voters by clarifying the crowdsourcing selection process and offering greater incentives for people to submit their pictures online. For instance, if the company’s vision were to support local artists, I would donate a portion of all Jones Soda bottle sales with the artists’ picture  on the label to the artist. Even if the amount represented 0.1% of sales, any monetary amount would be better than nothing. Jones Soda could also offer winners a lump sum reward, similar to what Tongal does. In addition, I would be sure the winner receives a bottle with her/his picture on the label, and I would create a team to post stories via social media about how Jones Soda affects the lives of people whose pictures are featured on the labels.