Paying tribute to Clay Christensen’s venerated disruption framework, Sam Mallikarjunan, executive strategist at HubSpot and instructor at Harvard’s Professional Development Program, makes the case of Fake News being a low-end disruption to traditional Media[1]. In particular, Mallikarjunan states that traditional journalism has move up in the sustaining innovation path that focused on high-value customers that either paid for subscriptions or were hot targets for advertisers, overserving “title-readers”, to whom robust media offerings and interactive experiences were much less valuable. In this context he claims:

“The job-to-be-done served by fake news is to reinforce existing beliefs and mitigate the immensely uncomfortable feelings caused by exposure to information that contradicts those beliefs. Fake news articles are to cognitive dissonance as decongestants are to a stuffy nose — they relieve the discomfort caused by cognitive capacity clogged with contradictory evidence.”

But how does this affect platforms? Well, the vehicle through which Fake News has cheaply and virally spread has been mainly social media, and especially, through the most popular platforms where network effects are strongest: Google, Facebook, and Twitter. In fact, an analysis from Buzzfeed found that during the 2016 US election fake news stories generated more engagement on Facebook than did the top election articles from mainstream news channels[2]. 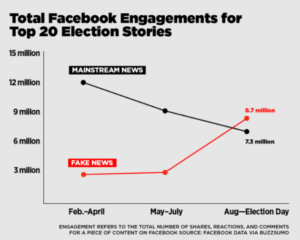 Some trends are relevant: increasingly everyone gets their news though online sources via their smartphones, people can customize information delivery on personal preferences (ex. sign up for news alerts, decide who to follow, etc.)[4], and social media is the go-to source for news – according to PEW Research Center, in 2017 67% of Americans got at least some news on social media[5]. But despite the tremendous increase in reach, in parallel in the US, there has been a declining public trust in traditional news media: 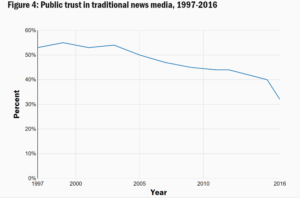 Misinformation is not a novelty, but clearly the US election has made this long-standing issue much more apparent. Because again, what is unique about fake news today, is the role of digital platforms in facilitating the spread of both news and fake news. Social media allows for information to be shared and distributed at unprecedented speed, and because we are more likely to trust information shared by people we know, this mechanism also inadvertently leads more of us to believe in fake news[7]. In this clear turning point for media, all eyes are set on how platforms are reacting to this crisis of credibility, and also many are analyzing the new opportunities for value creation and value capture that are appearing in the industry.

Following we will analyze 3 areas of opportunity:

– Publishers creating their own platforms: Publishers like Shibsted or Bingdu have started to build their own platforms for content and advertising, hoping to take advantage of this ‘flight to quality’ news to scale and compete with Facebook. The expectation is that more publisher-owned news aggregators might emerge in the future[8].

– Messaging applications and conversational interfaces: It is not even Facebook and Twitter anymore, but today we share most of our content through messaging apps like Whatsapp, Facebook Messanger, Snapchat and WeChat. In that line, bots —intelligent computer programs that simulate a conversation—are definitely part of a new engagement strategy that publishers have started to explore in order to improve user engagement.

– Voice platforms: Publishers are already experimenting and investing with voice-controlled assistants. Having Alexa, Siri, or your Google assistant summoning up the news headlines is already a reality, though it comes with a whole set of new challenges to content creators regarding business models and storytelling.

– Google, Facebook and Twitter are all supporting the trust project, which objective is to create Trust indicators these social media platforms (among others) will be able to use to surface quality news.

– The fact-checking explosion:  Many organizations have emerged to present evidence and hard facts on hot topics that may be subject to misinformation in social media (specially related to politics). We call these “fast-checkers” and we can find examples all over the World: FastCheck.org, PolitiFact.com, and MediaMatters.org in the US[9], Le Monde, and Pagella Politica in Europe[10], and even Chequeado.com in Argentina. It will be interesting to see the efforts platforms will do (if any) to incorporate these ‘checks’ to the content that is being distributed through them, or maybe they could even integrate with some of these players.

– Sponsored Content Disclosure: Among the many transparency tools and features being developed, the “Paid for by…” and “Advertisement” labels on paid content are already being deployed in most social media platforms, and it is expected in the future for users to be able to click to disclose more information about the advertisers[11]. Additionally, Facebook has deployed the ‘Related Articles’ feature[12] to allow users to explore different perspectives on the stories and advertising they are reading in their feeds.

– Algorithm Changes paired with AI content curation: changing algorithms that “turbo charges” misinformation because it prioritizes posts that spread quickly, incorporating automatic picture recognition, machine learning, and better source verification programmatically are all changes that platforms are looking into, and will probably soon be on the way[13].

If social media should be held responsible for a phenomenon like #FakeNews is a different moral discussion, but what we can assure is that to the extent that Fake News continue to disrupt how customers engage with platforms, we can bet that it will be in the best interest of Google, Facebook and Twitter, to help become part of the solution, if they don’t want to lose relevance.

GROW(ing) a platform to improve job placement in Japan (and then the world?)

The rise of a digital agriculture platform