Financial inclusion, providing the underserved population access to financial products and services, has been believed to be a key enabler to reducing poverty and boosting prosperity in the developing world.[1] According to the World Bank, 2 billion adults worldwide don’t have a basic account, and more than 200 million formal and informal micro, small and medium-sized enterprises (MSMEs) in emerging economies lack adequate financing to thrive and grow.[2] There is a classic chicken-and-egg problem in financial inclusion. Traditional banks are not willing to lend money to borrowers if they don’t have a credit history. The borrowers, on the other hand, don’t have a credit history because traditional banks are not willing to provide loans to them.

Lenddo and EFL, two fintech startups which merged last October, are trying to solve the problem by providing alternative credit scoring model. Lenddo has developed LenddoScore, the scoring solution using non-traditional data, such as data on social networks, mobile phone usage and telecom data.[3] By allowing the system to collect the data from their mobile phone, the borrowers are able to receive loans from banks without sufficient credit history. The time required for scoring is less than 3 minutes – huge benefits for borrowers who need the financial access immediately.[4] The model is also beneficial for lenders such as traditional banks. According to Lenddo, the model allows lenders to increase its approval rates by 15%, and reduce the default by 12%.[5] EFL, on the other hand, uses psychometric and data analytics to provide alternative credit scoring model. In their model, the borrowers take a test which evaluates their traits like ethics, honesty, business and leadership skills, and intelligence, and its algorithms provide a credit score based on such traits.[6] In Banco G&T Continental, one of the partner banks with EFL, succeeded in decreasing default rate by 72% and increasing client base by 53%.[7] Both Lenddo and EFL capture the value by charging the license fee from lenders, such as traditional banks and microfinance institutions. The lenders incorporate the alternative credit scoring model into the application process, and utilize it for the lending to borrowers with thin credit history. Lenddo and EFL extract the data from the partner lenders while securing the borrowers’ privacy, and improve its predictive model. By being a service provider instead of a bank by themselves, Lenddo and EFL are able to build competitive algorithms using the data from multiple lenders. The recent merger enables them to further strengthen the model, by integrating complementary data sets, social media and mobile phone data, and psychometric data. 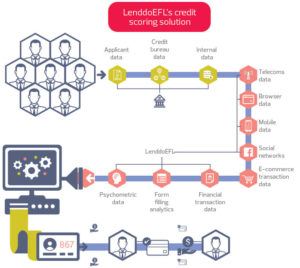 Although there is little doubt that companies like Lenddo and EFL promote financial inclusion in emerging markets, there are several challenges they are facing. First, there is a risk that current clients, traditional banks and microfinance institutions, try to disintermediate Lenddo and EFL. Jeff Steward, the founder of Lenddo, said “…our biggest competitor is financial institutions moving slowly who are thinking they can do this in-house.”[8] Second, in order to make its predictive model accurate, they need to maintain the quality of data they collect. EFL faced many abuses of the tool implementation in partner banks, such as loan officers giving “correct” answers to applicants, and allowing applicants to use cell phones to help with the memory-testing portions of the assessment.[9] Last but not the least, they need to be careful about how they “discriminate” bad borrowers from good borrowers. Lenddo has 12,000 variables of tracked mobile phone usage behaviors[10], which make its model almost like a black box. The variable includes foreign language used,[11] and it can lead to building the model discriminating certain ethnic group from others for their access to credit. With the rising concerns on data privacy abuse by tech companies, they need to be fully aware of how their model really works to achieve financial inclusion without such biases.

The Worldwide Leader in… Forecasting?