Fancy graphics showing player and match statistics powered by IBM have become such a prominent feature of tennis broadcasts from Grand Slam tournaments that it is hard to believe that advanced data analytics in tennis is a nascent field that remains more a gimmick showing off IBM’s analytics prowess than a tool necessary for succeeding at top levels of professional tennis. There is no doubt, however, that IBM’s effort is opening the eyes of the tennis world to the power of data and is paving the way towards professional tennis joining the ranks of football, basketball and soccer as a sport with broad applications of data analysis.

IBM has had partnerships with tennis Grand Slam tournaments for years providing the technology underlying some of the mundane digital features of tennis tournaments like on-court display of scores, measurement of serving speeds or collection of high-level match statistics.[1] Two parallel developments provided an opportunity for IBM to increase its engagement with the tournament organizers. First, the introduction of the hawk-eye technology in 2006 which tracks ball and player movement dramatically increased the richness of data captured and made tennis data analytics far more interesting. Second, the growing importance of mobile technologies and social networks provided a great channel for IBM to engage fans online with real-time scores and data analytics. 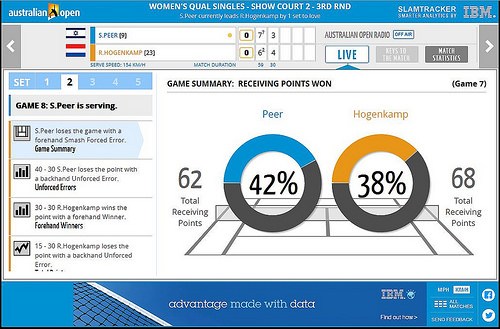 Live analytics provides new ways for fans to engage with the tournament.

The richness of real-time data analytics that IBM provides to tournament organizers, broadcasters and fans has brought fans a new way of engaging with and enjoying the game. Furthermore, the sharing of tennis records and statistics turned out to work very well on social networks.[2] Increasing the visibility of tennis tournaments and driving fan engagement is of course highly desirable for tournament organizers and tennis federations that can capitalize on this asset through higher ticket prices, more expensive broadcasting rights or better sponsorship deals.

IBM’s data collection and analysis also provides some value to the professional players taking part in the tournaments who get access to detailed data and video capture from their matches which they can analyze to improve their performance. However, the value creation through this channel remains very limited as IBM decided not to make its data accessible to the public and only shares match data with the two or four players who were on the court.[3] 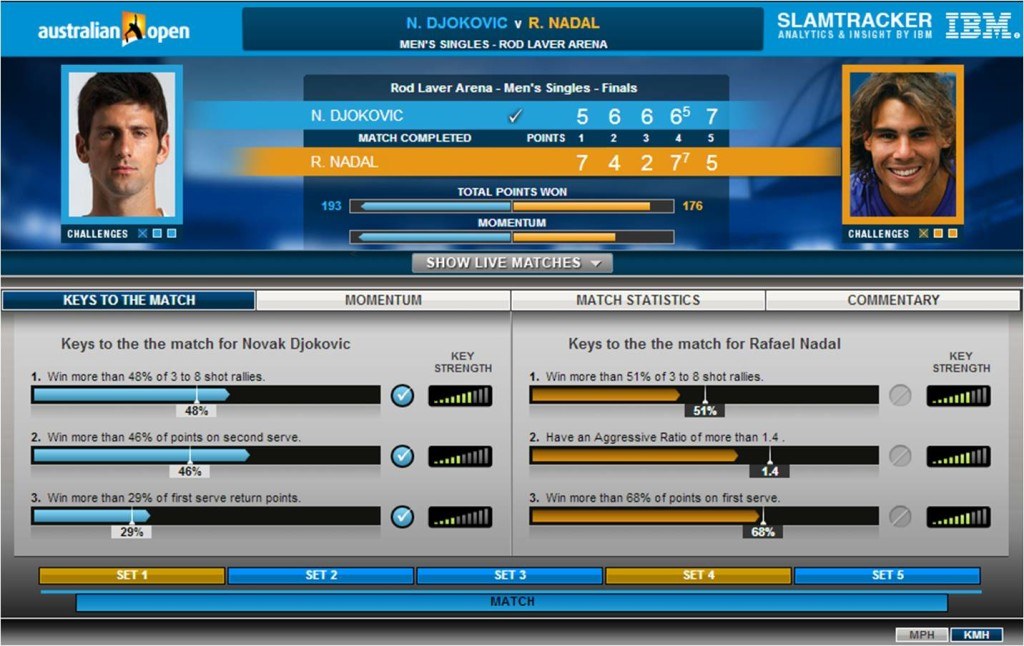 Although IBM is not transparent about the terms of its sponsorship deals with Grand Slam tournaments,[4] it seems plausible that value capture for IBM comes entirely from the promotion IBM is getting as the company chosen to provide the complex infrastructure and streaming data analytics for these high-profile events. For IBM this is a live and highly publicized case study showing how the company can deploy its technologies to client problems to transform an industry that has historically used little technology and data analysis.[5] Although the value and quality of some elements of the service offerings have been questioned (it turns out the predictive power of IBM’s Keys to the Match predictive analysis leaves much to be deserved according to this analysis from WSJ) the ability to scale up the infrastructure, utilize its products (including IBM Watson) and innovate in a new setting show IBM’s capabilities and resources across hardware, software to services in a great light to prospective clients.

Emerging competition and the future of data analytics in tennis

While few companies can match IBM’s ability to drive the technology side of major sports events the company’s unwillingness to share its data left an opportunity for niche start-ups aiming to provide to players detailed analysis and annotation of video footage of tennis matches. For the time being the service relies heavily on manual data entry by sports analysts which results in very steep prices[6] but one can see a future in which at least some of the manual entry is automated and the data becomes more affordable for scouts and tennis academies and not just for top tennis professionals.

At the same time a non-profit project Tennis Abstract collected a comprehensive historical database of high-level tennis statistics. While the range of data is very basic, it’s certainly fun for a geeky tennis fan to dig around – a bit of time looking at the results of 2,000 ATP matches from 2015 certainly challenged my preconceptions that left-handed, taller and more experienced players have an edge in professional tennis.

Regardless of whether IBM make its data available or whether Tennis Abstract’s attempts to capture more detailed data through crowd-sourcing succeed, it is clear that tennis is moving in the direction of other professional sports leveraging data analytics to give players an edge in a highly competitive environment so stay tuned for a bigger change to the sport beyond IBM’s fancy charts.

Automation at The Associated Press: Could a robot have written this blog post?