HuaCe Media, listed on the Shenzhen Stock Exchange in 2010, is a leading film and TV production and distribution studio based in Hangzhou, China. It now covers 4 key business segments, including TV series production, motion picture production, reality show production and artist agency. HuaCe is undoubtedly the leader in Chinese TV series production industry in terms of both market share and the quality of the productions (3 out of 10 best audience rating shows for the past 2 years in China were produced or co-produced by HuaCe). At the same time, TV series production is also the most dominant business unit of HuaCe, contributing ~560 million USD revenue in 2016, which is almost 80% of HuaCe’s total income that year. 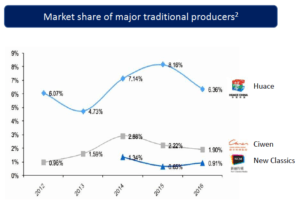 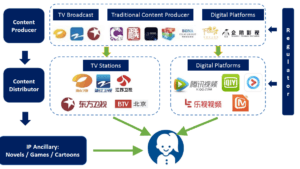 However, the explosive development of online video streaming platforms has hugely disrupted the business model of traditional production studios like HuaCe. With the growth of internet and mobile infrastructures over the past 10 years in the country, more and more Chinese audiences start to move online using laptops, smart phones and tablets to watch TV contents. Digital platforms emerge to become another important content distribution channel besides TV broadcasts. Backed by the Chinese internet giants BAT (Baidu, Alibaba and Tencent), the digital platforms are drastically concentrated with top 3 players, iQiyi(Baidu), QQ Video(Tencent) and Youku (Alibaba), controlling 77% of the DAU[1]. With a deep pocket and an ambitious aspiration of vertical integration, these digital platforms have been trying to move upstream into the content production business where traditional players like HuaCe used to dominate. Learning from Netflix’s model, the major digital platforms started to build or acquire content production studios directly (For example, QQ Video founded Tencent Penguin pictures, while Youku founded Heyi Pictures) and try to produce their own original productions to attract more audiences from competitor platforms. As the major digital platforms are gaining more credibility in the industry and providing higher financial incentives, famous creative and production talents are also willing to collaborate with them. According to the 2018 TV series plan of the major digital platforms, the original productions announced by the platforms are expected to catch up or even for the first time surpass the number of licensed contents from traditional content producers like HuaCe Media (According to each platform’s 2018 TV series plan, 45% of Youku’s contents will be original productions, 53% for Tencent and 51% for iQiyi[2]). 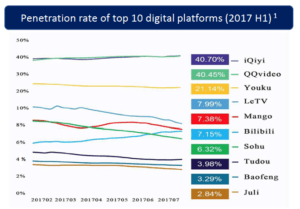 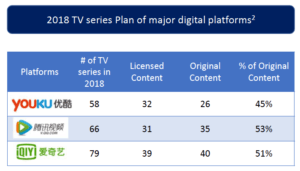 Although HuaCe is facing disruptive competitions against the “original productions” by the digital platforms, these “original productions” are in fact not all authentically originally produced by the platforms themselves. “Platforms don’t have that much capacity and professional capability to self-produce every show in their plan. Most of the so-called ‘original productions’ will still be completely produced or co-produced by traditional producers like us,” Karen Fu, the Deputy President of HuaCe Media, explained, “but in a format of ‘cost-plus’ model. The digital platforms will be the major investor and order the show from us. They pay us the production cost plus 20-30% margin for the show and take away all the upside. We learned this model from Netflix since it’s doing the same thing in Hollywood to traditional studios like Warner Brothers.” 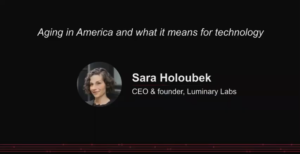 Aging in America and what it means for technology 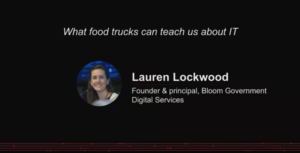 From the business lenses, it is hard for HuaCe to say no to an offer like this, as the platforms are at the same time also their biggest buyers and control the online distribution channel of HuaCe’s own shows. Also, the deal in fact exposes no risk on HuaCe’s side with an assured margin point in advance. “Although no risk, the challenge brought by the digital platforms is still compressing our upsides hugely.” Said Karen Fu, “If we go back to the time before the digital platforms exist, we could gain extremely high profits from blockbuster shows, since we were the investor that took all the risk. Now when we enter the ‘cost plus’ deal era and the platforms are the investors, even if the show is a blockbuster, we still get the fixed 20-30% margin.” The gross profit margin of TV production business in HuaCe decreased to 24% in 2016, suffering a 13% drop compared to that of 2015, majorly due to the pressure from the digital platforms.

From my view, it is inevitable that the traditional production studios’ domination would be taken away by the digital era disruption, since the digital platforms control the key access to audiences, which is their core competence that studios like HuaCe could never catch up but at the same time have to rely on. As a result, instead of trying to fight against the trend, I would recommend HuaCe to take advantage of this trend and grow its business through its own core competence, talent and quality. HuaCe should position the “cost plus” orders from digital platforms (approximately 1,000 episodes order every year according to HuaCe) as a new opportunity, which provides a constant and large quantity of demand from the digital platforms. Leveraging this opportunity, HuaCe could choose to develop its own artist agency business, partnering with both professional film academies and other top universities in China and growing high-quality creative talents through its large number of productions every year. Playing an “Venture Capital role” in the talent acquisition of film and TV production process, HuaCe will gain a great advance in generating huge profits from the “zero to one” step that discovers grass roots talents and brings them in front of the audiences through HuaCe’s productions. These talents will improve the quality of the HuaCe’s production, strengthen HuaCe’s core competence of talents, and in the long run also benefit HuaCe’s globalization footprints in return, helping it grow through international distribution of high-quality contents.

There are 2 potential organizational challenges that HuaCe may meet if it follows this recommendation.

First of all, the growing quantity of “cost plus” orders from digital platforms would occupy a large number of HuaCe’s existing talent resources. With limited economic upside for the content creation side, creative talents would potentially lose the major incentive to strive for the higher quality, and that’s a similar issue faced by most traditional content producers, like Warner Bros, in Hollywood as well. Shifting HuaCe’s business emphasis to growing the artist agency business is not completely applicable to fully solve this concern. If the existing talents lose economic incentives and continue to deliver only the quantity, rather than the quality, of the “cost plus” orders, how much control would HuaCe have to assure the quality of the grass roots talents, who would debut and grow up out of such a troubling status quo? Secondly, if, facing the challenges, HuaCe chooses to largely invest in and adjust its strategic focus to artist agency business, which is a non-core business unit, how could it balance the interests of the TV series production team, which is currently the absolute major revenue and profit contributor inside HuaCe? After all, the success of grassroots talents is very much dependent on the smooth cooperation and economic allocation between artist agency business unit and TV series production business unit.

One potential mitigation of the above organizational concerns on quality, incentives and balance of economic interests is to systematically reinvest a certain amount of profits earned from the growing artist agency business back into incentivizing creative talents in TV series production business unit. HuaCe could initiate internal contracts for both its artist agency business and TV series production business, clearly identifying that the TV series production teams would claim a certain share of interests from the artist agency business according to the resources they provide to the grassroots talents and help them debut and mature. This will definitely require a high level of internal coordination between business units and transparency across the organization but will also on the other hand build up an industrialized business frame for HuaCe to further explore possible opportunities in other vertical segments.

As the digital era is disrupting the traditional production side of entertainment and media industry both in China and in Hollywood, marginalization of traditional players is highly likely going to happen if they don’t transform themselves together with the digital trend nor leverage the opportunities provided by the digital era. Improving the quality of Chinese TV series production is a long-term investment that calls for both strategic emphasis and systematic economic support. With the challenges ahead, HuaCe, as the leading player in Chinese film and TV production field, still has a long way to go.

ClassPass: doomed to be the next Blockbuster?