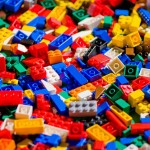 Did you also have these toys of your childhood that you still remember today because you spent such a lot of time playing with them? For me as well as for millions of other kids LEGO’s little colored plastic bricks have been this kind of toy, and since their introduction in 1947 more than three generations have been building cities, cars, and fantasy worlds with these world famous LEGO bricks. The business model of the family-owned Danish LEGO Group has been the same for many years: after a product has been developed by LEGO’s internal design department, the set of bricks will be produced and sold with instructions how to build the respective model. But the real fun starts in children’s rooms, when the bricks of different models are reassembled to new individual LEGO models. Today the modular LEGO system has grown to an impressive variety of different parts (colored bricks, figures, and many other small pieces) that can be assembled to produce models of all kinds.

However, the LEGO Group faced serious problems during the early 2000’s. The internal designers created more and more complex products, requiring many new components. The supply chain costs exploded, but sales dropped 30% in 2003 and another 10% in 2004. Within seven years the number of different components increased from 7,000 to 12,400. Not only had LEGO overdiversified its product line, but also created imaginative and very complex products that didn’t appeal to their (still very large) fan base. Clearly a change was needed.

LEGO soon discovered that their incredible fan base not only contributes to their brand reputation, but could also be used in a very different way: Crowdsourcing.  Children as well as adults never just build the predefined LEGO model once. They usually play around and often they create new stunning models with existing bricks and other Lego parts (for example have a look at this car factory). This excitement about the endless opportunities to assemble existing parts builds the foundation for a large community of lead users. However, until a few years ago, this community has been dispersed and has never been explicitly addressed by LEGO before.
With the introduction of LEGO Ideas this changed. They created a new platform to create new models, share ideas, and even bring their own models 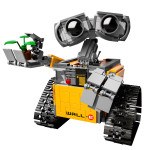 to the market with a very simple business model. Every registered user can create and publish a product design. Other 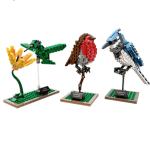 members of the community are then able to discuss the models, ask questions, and – the most important aspect – vote for it. As soon as a submission gets 10,000 votes, the product will be presented to official reviewers who will then identify the potential for the mass market (and legal issues). Unlike other crowdsourcing platforms such as Topcoder, there is no competition: Reviewers decide about the approval independently and if the product is approved, it moves into production and will be sold through the official LEGO distribution channels (for example this WALL-E model on the left or the birds on the right). Creators are incentivized not only by the reputation of having their own official LEGO product in store, but also receive a 1% royalty on the net revenue. To keep the user community engaged on the platform, LEGO Ideas tries to create as much transparency of the review and voting process as possible. Furthermore, they provide detailed feedback for rejected models and regularly publish news about the status quo and development process of crowdsourced products on a separate blog.

With this new crowdsourcing model LEGO creates great customer value. They inevitably get many more ideas than from their internal design teams (which are still necessary for the review, though). Until today, over 13,000 projects have been submitted to the LEGO Ideas platform (discover them here). Furthermore, as a side-effect the online voting process provides LEGO’s managers with a clear picture of the fan’s desires and almost automatically creates a “pre-launch campaign”. Although there is a 1% royalty cost, the quality and number of ideas help LEGO to capture a large portion of this value. To focus on their core ability to build exciting models out of simple components, just in the last few years LEGO went from 12,000 different pieces to 6,800 again. This move back to the roots also reduced the product development period from 2-3 years to ca. 12 months. I think there is further potential to grow their crowdsourcing business. Currently product reviews of all 10,000+ voted models only happen approximately twice a year. I think by speeding up this process LEGO could further grow the community of active creators on the platform.

The new “back to the roots” strategy combined with crowdsourced products already seems to pay off: in the first half of 2014 the Lego Group became the world’s largest toy company by market value, leaving Barbie-maker Mattel Inc. behind [2].

“We had some very rocky years, but it was our fans who got us back on track.

We were trying to do too many things and deviated from what we do best: classic building.” [3]

Student comments on How the Crowd Saved LEGO