The pioneer of data analytics in the NBA and the founder of the MIT Sloan Conference, Daryl Morey took an unconventional approach to building an NBA team. However, after tremendous success over the past 7 years, his approach is quickly becoming the standard in the NBA.

Once nicknamed Dork Elvis by a famous sportswriter, Morey is a computer science major with a masters from MIT. He worked in consulting and has built his career on statistical analysis. The Oakland Athletics’ (baseball) Billy Beane is said to be the pioneer of “Moneyball” or sabermetrics (using data to identify undervalued players in sports). However, Beane was not the statistical mastermind behind the “Moneyball” process.  Former Cleveland and then Oakland front office assistant John DePodesta was the data geek. Daryl Morey is the combination of Beane and DePodesta. He’s the data geek with a vision.

It took some time, but in Houston Morey managed to do something rare in sports: aligning the vision of the front office with the talent composition of the team and the preferred playing style of the coach. Houston now has the best record in the NBA this year and has been one of the 3 best teams in the league over the last 4 years. The first step in the process of building to their success was using data to define what that “vision” would be. Then he could fill in the rest.

Through deep analysis of game data, Morey identified his vision for how a basketball team should play. There are three main tenets to this vision 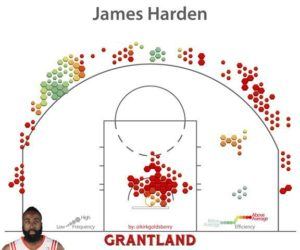 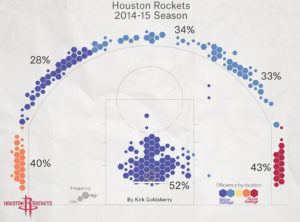 Since Morey took over, the Rockets have been among league leaders in three pointers, layups, and free throws. Furthermore, the players he acquires fit the mold by being either great players who can both shoot and drive to the basket, or specialists who do one of the two very well.

Morey’s vision took some time and thoughtful execution, but it has worked out better than anyone expected. In fact, according to a study by a PhD who specializes in statistical analysis, every team would be better off if they adopted Houston’s playing style. http://www.basketballanalyticsbook.com/2017/11/21/what-if-your-team-had-houstons-shot-selection/

Perhaps Morey’s greatest achievement has been using statistical analysis to understand where the value arbitrage opportunities are. According to Morey, “defense was more undervalued earlier in my career, now offense is more undervalued, so we’ve shifted our focus.” Morey understands this by building deep statistical models on team and player performance, and how each player impacts a game.

Because his vision is often contrarian to traditional scouting, Morey has been able to cheaply acquire players who fit his plans. Essentially, data has allowed Morey to get the players he wants at a discount because many other people do not see the same value in those players AND most general managers have not designed their team to play a style that fits the skills of that player. The result has been a smashing success.