Siri was one of the first widely used voice-enabled AI assistants after Apple bought the start-up and released Siri on its iPhone 4S. In 2011, it had a few years head start on the other big tech players, but today, Siri has fallen behind its competitors both in terms of knowledge and skills and distribution.

Knowledge and Skills: Since Siri is built into the iPhone, it can make phone calls, send text messages, update your calendar etc. But its access to third party (3P) apps is relatively limited and up until 2016 it was nonexistent. This has put Siri at a huge disadvantage relative to its competitors. 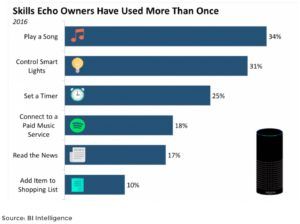 Siri wasn’t always this “close-minded”. When Apple purchased the company, Siri was able to connect to 42 different web services[2]. This knowledge base made up a significant part of Siri’s “brain”, but after Apple bought Siri it removed these capabilities. This decision is not surprising given Apple’s preference for a tightly controlled closed system, but given that so much voice innovation today is happening on open platforms Siri is not set up for success.

Distribution: Siri has a user base of over 100M iPhones in the US[3] giving it some advantage over competitors that haven’t gone mobile, but iOS’s market share is dwarfed by Google’s Android and Apple is notably behind on entering the home.

Apple’s value capture mechanism for Siri is unclear. At launch, it probably helped to sell iPhones since it was a novel feature, but with Google Assistant on Android devices as well as the proliferation of virtual assistant apps, AI assistants have become table stakes for phones. To add insult to injury, you can ask Alexa to purchase an iPad from Amazon but when you ask Siri to buy an iPad she says “Apple.com should be able to help you with that.”

As an outsider, it’s hard to say exactly what went wrong but I believe the initial decisions to keep Siri closed off from 3P development and make it exclusive to iOS hampered Siri’s ability to get smarter quicker and increase its user base. Some posit that corporate politics may have also played a role and that Siri may lack a corporate champion since there has been so much leadership turnover within the division[8].

When I asked Siri what she thought about all this she just said, “That’s nice of you to ask, but it really doesn’t matter what I think” and therein lies the rub. 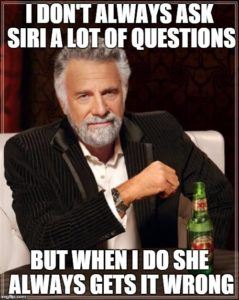 Student comments on Hey Siri, can you help yourself?