Hello Barbie is the fulfillment of any child’s dreams: since there have been toys, every kid has fantasized about having conversations with their beloved doll or stuffed animal. In the 20th century, toy makers got a step closer to turning dreams into reality with the commercialization of dolls that spoke several phrases and teddy bears that moved their ears while telling stories.

In the last ten years, advances in artificial intelligence and big data have provided adults with devices that engage on conversations, such as Apple’s Siri and Google’s Assistant. But how are kids benefitting from these developments?

The advances in artificial intelligence and speech recognition have spilled over to the toy industry. According to Mattel, the toy manufacturer and parent company of Barbie: “The number one request we hear from girls is that they want to have a two-way conversation with Barbie doll.” By partnering with ToyTalk, an artificial intelligence company based in San Francisco, they’ve now made that possible.

Hello Barbie is the first AI-powered doll in the market that uses speech recognition and progressive learning to engage with children. Priced at a premium to other dolls (over $80), the doll is programmed with more than 8,000 lines of dialogues and 20 interactive games. Its speech recognition technology is equipped with a microphone, a speaker and two LEDs, and is activated by a push-and-hold button located on the Barbie’s belt. The LEDs light up when the doll’s speech recognition is active. 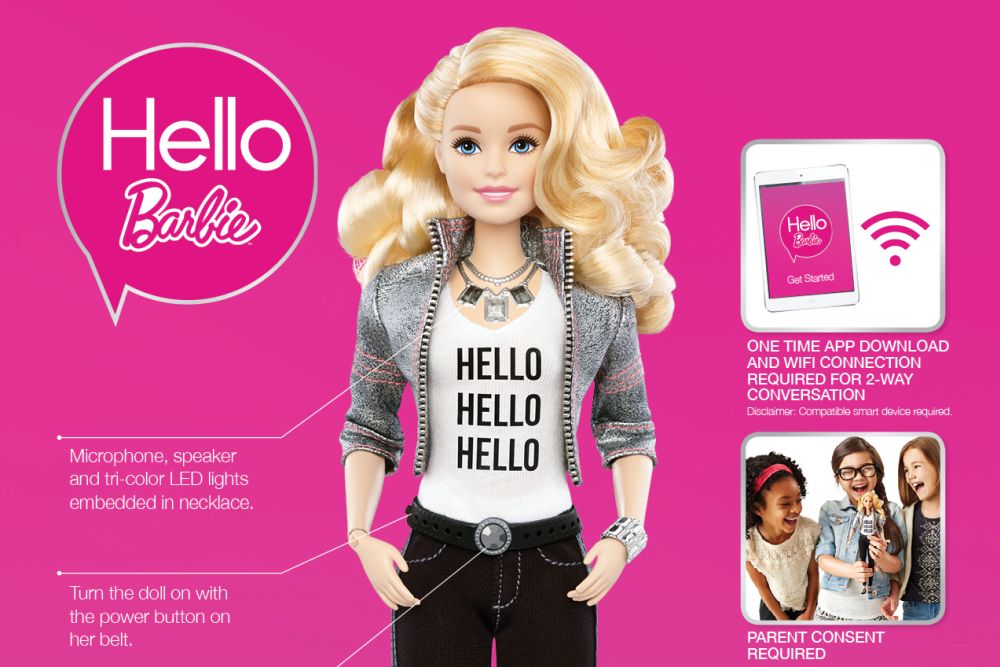 After purchasing a Hello Barbie, parents connect the doll to a WiFi network and create an account, which they can later use to access the child-doll conversations. Kids can start a conversation with Hello Barbie by pressing the button on her belt. To hear Barbie’s response, the button must be released. The recorded dialogue is sent to a control center via a cloud system, where ToyTalk’s speech recognition technology uses natural language processing to decide possible responses and select the best one.

The conversation and data are sent back and forth between the Barbie and the ToyTalk control center, with all the storage of the recordings and data-processing occurring in the cloud system. The full process (from the child speaking to Hello Barbie replying) takes approximately only a second. The stored recordings are used by the ToyTalk team to improve its speech recognition technology. They are also used to remember things about that child in particular, so that Barbie doesn’t ask the same question twice and is prepared to ask follow-up questions. For instance, Hello Barbie can answer questions build on data from previous conversations, such as “what should I be when I grow up?.” According to several sources, in one demonstration the doll suggested being a dancer or a politician, or a “dancing politician” after learning that the child liked acting.

Despite being in the forefront of the AI-powered toy revolution, Hello Barbie received strong criticism from sceptical parents. First, Hello Barbie calls into question the value of privacy. Should children’s privacy be taken away without their consent or ability to understand what monitoring is? Second, many customers were doubtful about the use of the recorded data. Would Mattel and ToyTalk sell their children’s data to marketers? Mattel tried to dismiss these concerns: “ToyTalk and Mattel will only use the conversations recorded through Hello Barbie to operate and improve our products, to develop better speech recognition for children, and to improve the natural language processing of children’s speech,” a ToyTalk spokesperson said. Third, as with any AI-powered device, Mattel has to decide how the doll would respond to sensitive questions about gender, religion or self-esteem. Lastly, US security researchers warned that when connected to Wi-Fi the doll was vulnerable to hacking. According to several sources, hackers could easily access Hello Barbie’s stored information and take control of its microphone.

Despite these concerns, it is clear the Hello Barbie has opened up a new horizon for toy manufacturers around the world: whether and how to integrate AI capabilities in their product portfolios. Its speech recognition technology and natural language processing ability use the data collected from children around the world to become “smarter”: learning about children’s interests, remembering previous conversations and providing each child with a customized and unique experience. As the creator and market leader of a whole new toy category, Mattel will benefit from its first mover advantage and ability to price these dolls at a premium. It has been reported that the toy manufacturer has been exploring a $300 hologram version of the doll. This premium, I believe, is justified: will children prefer a teddy bear that wiggles its ears or a Barbie who they can speak with for hours? I think that the answer is obvious.

“Hackers can hijack Wi-Fi Hello Barbie to spy on your children” – The Guardian (Nov-2015) https://www.theguardian.com/technology/2015/nov/26/hackers-can-hijack-wi-fi-hello-barbie-to-spy-on-your-children

“Privacy fears over ‘smart’ Barbie that can listen to your kids” – The Guardian (Mar-2015)        https://www.theguardian.com/technology/2015/mar/13/smart-barbie-that-can-listen-to-your-kids-privacy-fears-mattel

How Well Does Spotify Know You?