As the television landscape has shifted away from traditional cable and toward digital distribution channels, HBO has managed to stay relevant by shifting its business model. HBO made two notable shifts: 1) launching HBO Go in 2010 to better compete with streaming services and 2) launching HBO Now in 2015 to accept subscribers that do not have pay television.

Digital Transformation of the Media Industry

Over the past few years, the traditional pay TV distributors have been plagued by cord-cutting, where subscribers who have paid for cable in the past cancel their cable subscription. In 2015, 82% of TV households in the US subscribed to pay TV service compared to 87% in 2011[i]. Many of these subscribers are replacing traditional cable and satellite pay TV service with digital streaming services, such as Netflix, Hulu, Amazon Prime, and HBO Now. The top reason for cord cutting is that pay TV is too expensive[ii]. 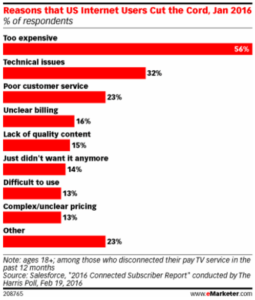 Traditionally, HBO was a premium cable network that subscribers could add onto a basic cable subscription for a monthly fee of typically $15 per month. HBO captured value by retaining a portion of this revenue and sharing the rest with the cable or satellite distributor. HBO (Home Box Office) originally created value for subscribers by airing popular, new-release movies that had recently been in movie theaters. In the 1990s and 2000s, HBO began the strategy of creating exclusive, original content to differentiate from other premium movie networks. This model has been adopted by Netflix, Amazon Prime, and other digital distributors as they invest in original content to attract and retain subscribers.

Netflix launched its streaming service in 2007. As television viewing shifted to digital channels, HBO launched HBO Go in 2010 as a free add-on for existing HBO subscribers, allowing subscribers to watch HBO content when and where they wanted on screens other than a television.

With the entry of new distribution channels, the number of companies competing to create and distribute content has increased significantly. This has led to a plethora of high-quality, high-budget television content. HBO continues to create value for subscribers in all of its distribution channels by investing in more original programming to compete directly with Netflix and Amazon Prime[viii], and in my opinion, has some of the best new content currently available, including Game of Thrones and Westworld.

HBO took this strategy further by opening up their service to cord cutter with the 2015 launch of HBO Now. This allows cord cutters to access HBO content that they previously couldn’t without a pay TV subscription. HBO was one of the first traditional cable networks to create a direct-to-consumer offering that circumvented the traditional pay TV distributors. The HBO CEO confirmed that HBO Now is an incremental revenue stream that is not cannibalizing revenue from cable distribution, with less than 1% of subscribers switching from a cable HBO subscription to HBO Now[ix], especially since it is priced equivalent to the pay TV add-on.

HBO captures value by charging $14.99 per month for an HBO Now subscription. Since it is a direct-to-consumer offering, HBO gets all of this revenue and does not need to share with pay TV distributors like with traditional distributors. As of March 2016 (the last reported subscriber data), HBO Now had close to 1 million subscribers[x]. This equates to $180 million in revenue annually. 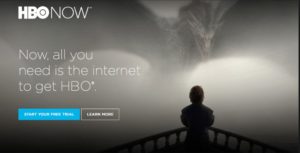 HBO was not the first company to offer consumers a digital streaming offering or the first traditional media player to launch a direct-to-consumer offering; but, as a follower, HBO has adapted and added to its business model to continue to create and capture value in the evolving media landscape. However, the company needs to continue to invest in original content to stay relevant to subscribers, especially as Netflix continues to increase its proportion of original content[xi].

4 thoughts on “HBO: Content Now Or On The Go”