In March 2016, Google’s AlphaGo program defeated the world champion of board game “Go” [1]. Go is popular in China and Korea and is 2500 years old [Go game rules are here]. This was a watershed moment in Artificial Intelligence as experts had not expected a computer to defeat professional Go players for many more decades.

What is so special about Go compared to Chess?

IBM’s Deep Blue computer defeated Chess Grandmaster Kasparov in 1996 [2]. However, Go is more complicated than chess. There are 2 metric that captures a game complexity:

To give some perspective, the number of atoms in the universe = 10^80 [2]. Therefore, both chess and Go are almost impossible to beat using brute force. Go is also 200 times more difficult to solve than chess.

AlphaGo achieved this using a combination of data and algorithms

The initial dataset for AlphaGo consisted of 30Mn board positions from 160,000 real-life games (Dataset A). This was divided into 2 parts – training and testing dataset. The training dataset was labelled (i.e. every board position corresponded to an eventual win or loss). AlphaGo then developed models to predict moves of a professional player. These models were tested on the testing dataset and the models correctly predicted the human move 57% of the time (far from perfect but prior algorithms had achieved a success rate of only 44%) [3].

AlphaGo also keeps playing against itself and generates even more data (Dataset B). It, thus, continues to generate and learn from more data and improves in performance. 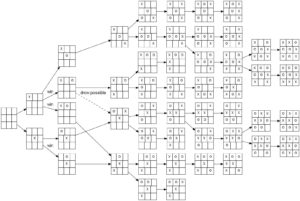 A game like Go is essentially deterministic i.e. since all the moves must follow certain rules, a powerful computer can develop a game tree (like the one shown for tic tac toe on the right) for all possible moves and then work backwards to identify the move that has the highest probability of success. Unfortunately, Go’s game tree is so large and branches out so much that it is  impossible for a computer to do this calculation. [4]

AlphaGo identifies the best move by using 2 algorithms together. The first algorithm (Algorithm X) tries to reduce the breadth of the game while the second algorithm (Algorithm Y) reduces the depth of the game. Algorithm X comes up with possible moves for AlphaGo to play while algorithm Y attaches a value to each of these moves. This eliminates a number of moves that would be impractical (i.e. for which the probability of winning would be almost zero) and, thus, focuses the machine’s computational power on moves with higher winning probability

The following schematic explains how AlphaGo uses this combination of data and algorithms to win [Note: this schematic is very bare bones and gives a very high level overview of how AlphaGo works] 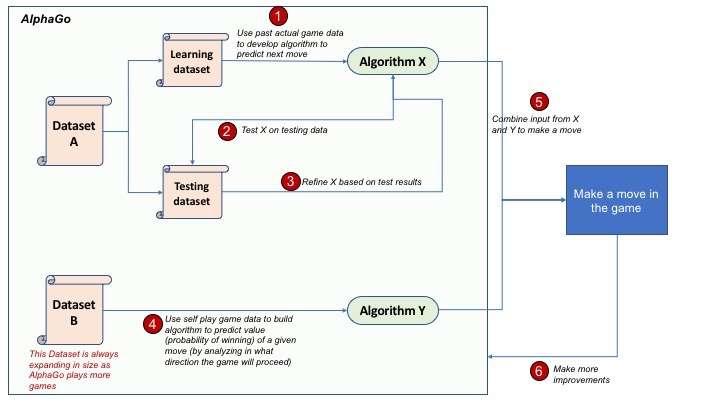 What value does a “recreational” algorithm create?

AlphaGo’s value creation is beyond just its capability to solve a board game. Google acquired DeepMind (creator of AlphaGo) in 2014 for $500Mn [5] and, thus, clearly sees value in a seemingly recreational program. IBM’s Watson is a great example of recreational programs becoming mainstream technologies. Watson started off as a computer to play jeopardy but now employs more than 10,000 employees [6] and is being used in healthcare, digital assistants etc.

The advantage of AlphaGo is that it’s algorithms are general purpose and not specific to Go [2]. It would be comparatively easy for Google to customize the algorithms to solve other AI challenges as well. The data that AlphaGo generates or has collected is not useful for other application but the algorithms that power the machines are. Google is already using elements of AlphaGo for incremental improvements in its products like search, image recognition (automatic tagging of images inside Google Photos), Google assistant [7].

How will Google capture value from this?

Google achieved the holy grail in Artificial Intelligence by developing AlphaGo. Its investment in these algorithms (and a seemingly worthless attempt to win at a board game) will pay rich dividends by improving its products like search, Photos, Assistant and self-driving cars as well as by solving other big problems in healthcare, manufacturing etc.

Student comments on Google AlphaGo: How a recreational program will change the world