How Snapchat is revolutionizing the way we consume media

Within the crowds of any event, it has become the norm to see a barrage of cell phones, serving as the second eyes, aggressively capturing the spectacle that is at hand. But what’s changed in recent years, is the steady climb of Snapchat as the forefront app for media consumption. People are rapidly sharing “moments” as opposed to just media; a shift to pulling people into experience; a realm that was formerly dominated by the cable industry. And some are claiming that that curious little app, with the goofy ghost is taking over the cable industry. Snapchat is changing the way in which people are consuming news, sourcing perspectives from a pool of its users as opposed to the singular. All through the utilization of massive consumption at the scale of micro curation. Snapchat is feeding its users the news through their perspective. It has become a crowdsourced media powerhouse.

Snapchat is built around the premise of expiring media; video clips or photos that are recorded and shared in the moment, but then disappear immediately after they’ve been seen. The structure of the platform initially started as a peer to peer messaging service, where friends could send each other direct content. Users send direct messages to their friends in real time, and the media expires once it’s consumed. These messages, if decided upon by the user, could be pushed into a feed to be available for repeat view by people who have added them, for 24 hours. This type of network interaction is the initial draw to get people using the platform, and gather a mass user base.

But the most interesting part of the direct social infrastructure, is how Snapchat decided to utilize it as capital, and an entirely new point of value creation.

With its users constantly generating, and sending media to friends, Snapchat started to realize that these were actually nodes of perspectives. Because Snapchat is an instantaneous media generation and consumption, its users can only “report” moments unedited; raw windows of real-time occurrences. This, along with receiving a user’s geolocation data, gives Snapchat the opportunity to leverage the perspectives of its users as a collective brain. And this is where the indirect social infrastructure comes into play. Snapchat users aren’t just social media profiles; they have now become news reporters.

Traditionally, cable was the interface for people to turn to and gather information about current happenings in their community and in the world. The consumption structure is simple; tune in to a channel at a specific time every day to get a news program that changes daily, and whenever there was a breaking story, it would interrupt traditional programming. This structure was flawed though, because it only offered the perspectives of the specific channel broadcasting it; curation of the singular. So the audience typically had allegiances to a specific channel for their perspective.

What is interesting about the new infrastructure of Snapchat, is that it is trying to replace the way in which we consume news, through the utilization of crowd-sourced perspectives. The core importance of Snapchat, is that each one of its users is a node, and each one is a window into a perspective of a moment. But, each moment isn’t the same as the next; there are tiers of crowd importance and interest:

Direct messages/Communication: These moments could be important to the individual users receiving them, but they don’t always have an importance outside of the smaller circle.

Local news: Snapchat’s has allowed its users to be one of the many perspectives within a geolocation story. Just like the news has its local stories, the app allows users to capture media that is tagged via location, and curated into a daily changing montage of perspectives within the area. These are stories that are interesting to the local community, but not necessarily outside of that realm. The stories are filtered and curated by Snapchat ambassadors that decide what goes in the story, and what doesn’t, and only appear in accounts of people within the location zone.

Light + Breaking news: In this tier, interesting stories ranging from a montage of a different city every day, to events such as the Grammy’s or sports events to news moments such as the Greek referendum, appear on every user’s account. They are called “Live Stories.” These stories are ones that have a general larger interest associated with them. This kind of crowd-sourcing allows the users to gain perspectives from every angle of a specific event. It’s the idea of the collective brain to understand the spectrum of what’s happening. This is a new method of comprehensive news consumption.

What is particularly interesting is that these Live Stories actually have a larger user base than the traditional TV one’s. For example. during the MTV music awards, MTV had an audience of 5 million viewers tuning in on its cable network, but 25 million viewers tuned in throughout the day to watch the Snapchat story of the event. 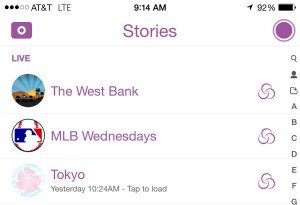 What is different about the consumption of media in Snapchat, is its ability to give the user member generated media about things they care about, in a way that makes them feel like they are partaking in the action from the front. And it also give its users the feeling that they could contribute to the reporting of media and have an effect.

The way in which Snapchat captures the value of this pixelated nodal content is through the utilization of ads. But, there are different kinds of ad types possible, and some don’t even explicitly feel like ads.

Traditional Video Ad: Because Snapchat users watch the stories in a linear fashion, the inclusion of ads between content is possible. The infrastructure is very similar to the way that television ads work, but the difference is that they are tailored to the format of media type on the platform (vertical, personal and curated). Plus, unlike in Youtube or Facebook, where the eyes of users could deviate from the ads, in Snapchat, the entire thing is an immersive experience. They rake in about $200,000 per sponsor for 10 seconds per Live Story.

Live Story: Entire Live stories such as the VMAs can be purchased and broadcasted to the users for about $800,000. This can be divided up by different ad sponsors though. The Live Stories run for an entire day.

Discover: Another spin off of Snapchat’s interface was the introduction of the Discover channels. These are channels that are owned by a specific company (Tastemade, Yahoo!, etc.) and are curated version of stories (not live), very similar to bite-sized TV channels, that change every day. Snapchat charges about six-figures per channel. These are passive ads; ads that users don’t realize are ads, but feel like quality content.

Essentially, Snapchat is the crowd-sourced version of television, and could rapidly start to eliminate the box once and for all.

Student comments on Goodbye Cable: One Snap at at Time