Gong’s software captures sales conversations across phone, email, and web conferences and uses AI and machine learning technology to analyze the data. The software then presents the sales team with critical insights that help salespeople improve their sales performance. In essence, Gong’s software helps the company generate more revenue by having better sales conversations. The company raised $200 million in 2020, bringing the company’s valuation to $2.2 billion.

Gong’s software provides real-time insights to salespeople so that they can have better sales conversations. Some of the key insights provided by the software are highlighted below 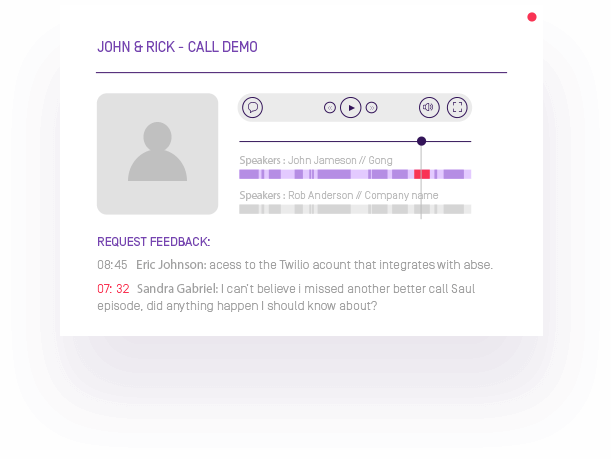 In addition to this, Gong’s software helps speed up the onboarding time of new salespeople as it allows the company to train new hires faster and help them have successful conversations right from the get-go.

Gong uses natural language processing (NLP) technology to transcribe and analyze sales conversations. Gong claims that its software goes beyond the traditional supervised machine learning algorithm. The company was awarded a U.S. patent for its technology that uniquely understands topics in conversations.

Gong sells its software to companies of all sizes. Its customers include companies like Linkedin, Zillow, Shopify, and Hubspot. Gong charges subscription fees based on the size of the company’s sales team.

Over the years, Gong has done well in the United States with more than 1,000 customers, quickly gaining its dominance in the Conversation Intelligence market. In 2020, the company received the highest number of reviews (1273), satisfaction score (92), and market presence score (96) as reported by G2. It has overtaken previously established Conversation Intelligence players such as Chorus.ai, ExecVision, Call Rail, and SalesLoft.

With proven success in the United States, Gong now set its sights on global expansion. While there is strong demand from international markets with companies across the world expressing their interest in leveraging the conversational insights offered by Gong’s software, international expansion presents several barriers.

Despite the challenges that loom ahead, global expansion presents a tremendous opportunity for Gong. To expand successfully, Gong can consider employing the following strategies.

Through my direct exposure to Gong’s software, I was blown away by what Gong’s software is capable of. The transcripts were accurate and the insights provided were tremendously valuable. As Gong’s software continues to learn from larger data collected enabled through a larger number of customers, it is evident that the software will become even more sophisticated. I believe that Gong will be able to expand successfully into international markets and become the world leading’s conversation intelligence company.

“Gong Named One of America’s Most Promising AI Companies by Forbes,” Prnewswire, Jul 07, 2020

Stylumia: Bringing Science to the Art of Fashion