Investment banking is notoriously known as a grueling, demanding industry requiring analysts and associates to work upwards of 80-100 hours per week on financial advisory projects to clients. In recent years, banks have struggled to attract and retain talent as millennials enter the workforce and value industries with better work life balance or mission driven organizations. Furthermore, as regulations on the financial services sector increase, and trading division results stagnate, banks have been forced to find other means of generating revenue aside from traditional investment banking revenues. As a result, the financial services sector is ripe for disruption and in many ways is playing “catch-up” as it better utilizes digital technology in its day to day business practices. Goldman Sachs, leading global investment banking, securities, and investment management firm, is one firm that is taking steps in the right direction to employ digital technology. However, what does this use of digital technology mean for the future of the traditional investment banking industry?

Disruption in the Financial Services Sector:

When many think of disruption in the financial services sector, the word fintech first comes to mind. Fintech is presenting the financial services sector with a new set of challenges as innovations threaten to reduce incumbents’ market share. There are several reasons why fintech has been so successful at disrupting the industry. Primarily, consumers were angry at the established banking system and developed a widespread lack of trust after the economic crisis. Banks also subsequently stopped lending after the crisis, which led to a need for consumers to find other sources of credit [1,2]. Finally, banks have monopolized the financial services industry for so long, that they did not foresee or react fast enough to the disruption at hand.

Since 2008, global investment in the fintech sector has tripled, from $928 million to $2.97 billion and it is forecasted to reach up to $8 billion by year end 2018 [2]. The UK and Ireland now account for over 50% of all European fintech investment. Venture capitalists around the world have also diverted attention to fintech, given the strong growth prospects in the industry.

So how are banks responding to the fintech revolution? Many banks have decided that instead of competing with these companies, they should instead partner with them. This has resulted in banks’ outright acquiring fintech companies. Many banks have also increased their total IT spend and invested in digital banking, accelerators, alliances and innovation labs. Many major banks around the world have either a startup program to incubate fintech companies or have put aside venture capital to fund, partner with or outright acquire fintech companies. In fact, Barclays is even creating a global community for fintech innovation, including opening an accelerator in New York’s Silicon Alley. Within Asia-Pacific, ANZ Bank has appointed “an international panel of technology experts” to advise its Board on the strategic application of new and emerging technologies and technological trends that could affect the bank’s strategy. 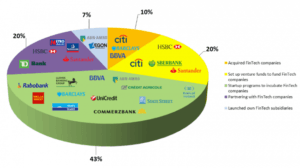 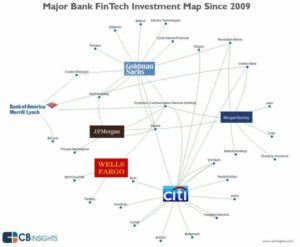 While time will tell whether banks are effectively responding to the fintech revolution, there is one thing that is clear. Banks such as Goldman Sachs have been forced to reconsider their business models and better employ digital technologies in their companies.

Goldman Sachs’ Use of Digital Technologies:

One primary way that Goldman Sachs is employing digital technology is to improve efficiencies in the workplace. The Company uses machine learning and artificial intelligence to reduce the number of mundane, repetitive tasks performed by bankers to prepare for client meetings. In fact, the firm has repurposed the role of its Strats team (previously known more as financial engineers or data scientists) to create a unified engineering front to work with bankers and clients directly. The repurposed Strat team has two goals: (1) to digitize bankers’ workflows through tools that improve productivity and quality of life, and (2) to use technology that is to engage clients in a more modern, data-driven way [1]. Typically, ahead of a client meeting, bankers (usually the junior analysts and associates) will slave away at night preparing various models with different capital structures, and associated financial impact. Through the use of an application called Zephyr created on Goldman Sachs’ Marquee platform, bankers can use the application to run real-time customized analyses of different debt structures at the client meeting in real time [4]. Other Marquee applications such as StrategyStudio allows clients to quickly build and analyze a custom investment strategy using indices and customized Goldman Sachs equities and fixed income baskets [3]. Tools such as Zephyr eliminate the back and forth required for analysts and clients when working on a particular client engagement and it also significantly reduces a bankers’ time completing mundane, heavily manual tasks. Whereas tools such as StrategyStudio give clients the ability to monitor and manage their portfolios on a day to day basis and reduces the need to communicate regularly with investment managers.

Goldman Sachs has also used machine learning and artificial intelligence to free up banker’s time to work on more meaningful work. The Strats team has built apps that use machine learning algorithms to sift through SEC mutual fund filings to better understand how shareholders relate to each other. In addition, machine learning has been used to analyze the factors that make some companies more vulnerable to activist investors than others [4].

One of the primary challenges with Goldman Sachs’ introduction of digital technology to improve efficiencies in the workplace is the threat of loss of jobs. In fact, in the early 2000s, when Goldman automated its U.S. cash equity trading desk, it resulted in a significant reduction in trader headcount from 600 traders in the 2000s to 2 traders and hundreds of computer engineers in 2017 [3]. Advances in technology are estimated to thin the ranks of low-level staff at Goldman by as much as 10% in the next few years. Kognetics, a software company that uses artificial intelligence to assist investment bankers, says about a quarter of their routine can be automated [5]. In addition to loss of jobs, as tasks get automated, it becomes more and more difficult for junior bankers to learn the basics of their job and to advance to higher positions. This results in a weaker pipeline of talent in the field. Furthermore, another challenge is that by offering clients access to proprietary internal data, Goldman Sachs risks losing some if its competitive advantage. One of Goldman’s primary competitive advantages is SecDB, a powerful analytics database that tracks and manages risk and calculates 23bn prices daily among 2.8m positions and 500k market scenarios. The Wall Street Journal has quoted that SecDB’s value is close to $5bn and Goldman previously turned down an offer from a client to license the technology for $1bn [3]. By offering this tool directly to clients, it risks eliminating the middle man in the process – itself. Clients could perform the analysis on their own and potentially book a trade with another competitor at a lower cost.

To tackle the loss job threat, my view is that Goldman Sachs should incorporate junior bankers in discussions when introducing new technology to complete jobs. There should be firm communication that this will not result in a loss of jobs, but instead a change in the nature of the job that junior bankers will perform. I would emphasize the fact that junior bankers will now be able to perform more value-add work and in fact, interact with the client more frequently at a junior level in their careers. To incentivize the use of digital technologies, I would align incentives by incorporating “effective technology use” as a measure that all employees are ranked on during annual performance reviews. This measure would then be used in calculating annual performance bonuses – therefore stressing the importance of the use of digital technology in everyday work. Furthermore, as the Strats team considers other ways to improve efficiencies in investment banking through the use of technology, I would incorporate investment bankers in brainstorming discussions. If investment bankers have a seat at the table, they will be less likely to view the Strats team as the enemy who is looking to eliminate their jobs.

To handle the risk of loss of competitive advantage, I would ensure that employees are staying actively engaged with customers throughout the process. By being tightly integrated with the client, Goldman Sachs will still be able to maintain its competitive advantage despite sharing some of its valuable software. Furthermore, by offering SecDB to clients, this offers Goldman Sachs an opportunity to utilize client data to better serve their customers.

In early 2017, Lloyd Blankfein (Goldman Sachs CEO) stated “We are a technology firm. We are a platform.” My view is that Goldman Sachs still has a long way to go, but is taking steps in the right direction to effectively employ digital technologies. What does this mean for the future of the traditional investment banking industry? Is human capital still a bank’s greatest asset?

[6] How are banks responding to the Fintech revolution? (2016, September 20). Retrieved April 26, 2018, from https://blogs.mulesoft.com/biz/trends/how-are-banks-responding-to-fintech/

Disney is Going to Win D2C