GoFundMe is an innovative crowdfunding platform founded in 2010 that allows individuals to launch fundraising campaigns for initiatives that are important to them. These campaigns range from personal campaigns to cover tuition expenses or medical bills to campaigns organized on behalf of charitable causes including natural disaster relief. The goal of each campaign is to source support for each cause by leveraging crowds of donors.

GoFundMe offers a technology platform to host these campaigns and provides marketing tools and support that are aimed at attracting crowds of individuals interested in donating to those specific campaigns. In addition to the technology platform and marketing tools, GoFundMe also creates value for individuals with a funding need by offering an efficient and safe payment collection method as well as tools to effectively manage each campaign. From the perspective of donors, GoFundMe offers a great way to find campaigns to donate to for causes that matter to them. Aggregating such a variety of causes for donors attracts large crowds who also value the brand and reputation of the company to assure them about the credibility of the campaigns. Additionally, donors seem to value the community aspect of GoFundMe, potentially espoused by the well-known phrase, “do to others as you would have them do to you”. 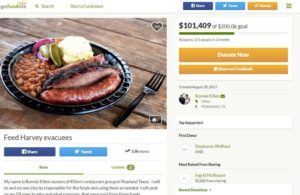 GoFundMe was not the first to develop a platform that seeks to crowdsource fundraising, however, it has become the largest platform in the space. Given how successful GoFundMe has been, many companies have sought to enter the space, including large, well-capitalized companies with huge embedded networks such as Facebook.

Historically, GoFundMe captured value by charging a 5% fee on the amount of money raised by those that start campaigns. This model allowed the company to become the largest crowdfunding business in the U.S. as well as a very profitable business. As of the end of 2016, GoFundMe generated $100MM in revenue and its platform hosted the raising of $140MM per month in donations.

Recently, GoFundMe decided to remove the 5% fee that they charged historically to make their platform available for free to both parties. In order to generate profits going forward, GoFundMe has added the functionality to voluntary add a tip to a donor’s donation. Presumably, this drastic change in business model came because of increased competition in the space. It may also have been driven by not wanting to charge those “in need”. GoFundMe’s shift in business model seems to indicate that GoFundMe believes that its service has created a community feeling around it platform, similar to what Wikipedia has done with information, to incentivize donors to increase their commitments by making contributions to the platform itself.

Do you think this drastic change in business model from a fee charged to individuals who launch campaigns to optional tips from those donating to campaigns is sustainable? Additionally, is lowering the cost of a campaign going to sustain GoFundMe against competitors, especially those with embedded networks?

Citizen App and the controversy of crowdsourced ‘Citizen Policing’

Is Amazon’s Mechanical Turk breaking down?