Many companies are already using data to drive decisions and according to Vala Afshar of Salesforce, 7 out of 10 companies expect to have data analysis centers by 2017.   Despite this, 77% of customers say they are not engaged with the companies that they buy from.   Why is that? Because with so much data, companies can lose sight of what winning organizations already know: the company must use the data not for it’s own sake but in order to put the customer at the center of their decisions. GM has taken this idea quite literally first through a continuous data feedback loop surrounding component sensors and now through pattern recognition identifying distracted drivers, creating additional value through pattern recognition associated with saving lives.

17 years ago, GM filed a patent to protect technology surrounding a component diagnostic system that used pattern recognition to identify whether components were operating normally or abnormally through a sensor network. That technology was embedded in vehicle components to identify potential failures prior to breakdown, such as low tires, oil pressures and even coolant temperature. Unlike traditional automobile sensors of the time, which were set on specific predetermined levels, the new technology monitored the specific vehicle components over time to identify trends to which the driver should be alerted. As stated in the patent, once fully implemented, “this invention is a total diagnostic system of the vehicles” with advantages that include among others, “to apply pattern recognition techniques based on training to diagnosing potential vehicle component failures.”  In these 17 years since that patent filing, GM has gone beyond sensors and developed data analytics capabilities to create an even greater value to the driver: safety alerts to distracted drivers. According to a study by the CDC and DOT, 421,000 people were injured and 3,328 people were killed in distracted driving accidents in 2012. In totality, 17% of the crashes in 2011 were due to distracted drivers. Addressing this problem, GM has announced a partnership with Seeing Machines to put sensors in cars that will alert distracted drivers to dangers surrounding them. Data captured over time to detect driver patterns has been used to identify fatigue and distraction.

Value Capture and Operating Model: ‘A Spy in the Car’

While there has been some concern about privacy, even so far as calling the technology a ‘spy in your car,’ there is great value to be created by saving lives. Skeptical of what the technology can do? Take a look for yourself as to how a driver can be alerted: Technology in Action

This technology is already in use in other safe driving capacities. Currently used in mining fleets, where operators drive for many hours at a time, the Seeing Machines systems are used detect behavior of facial expression, head movement, etc. through the use of an infrared camera mounted on the dashboard and an in-car computer. When a pattern recognized as fatigue, sleep or distraction is detected, the car alerts the driver through a beeping noise, buzzing seat and flashing lights. A 24-7 call center is then notified when a fleet operator has been awakened by the system, they can pull up the statistics surrounding the length of time the driver has been on shift, the distance traveled, etc. and then a phone call is made to the driver to ensure fitness to continue driving. 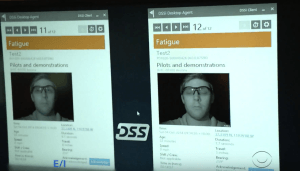 Seeing Minds’ operating model, to use the data provided based on driver monitoring to refine algorithms allows them to provide even greater value capture as their algorithms can become more accurate in detecting true safety risks. Additionally, I foresee providing this data to the fleet management groups as performance reports to better track drivers who operate safely versus those with patterns of risk.

The Future: A Spy in Every Car

Driver detection systems started in niche markets such as fleet management to refine the technology in areas where long distance driving is common. By partnering with GM, the Seeing Minds driver risk detection will scale to the mass market. In doing so, as admitted by the company, they will have to refine the information they gather to alleviate privacy concerns. Additionally, as has been seen by the Google Cars recently, the pattern detection system can serve as an alert only to the driver within the car and cannot take into account the actions of the drivers in surrounding vehicles. Just as self-driving cars see more rear-end bumper collisions as they cannot add the irrationality/rationality of surrounding humans into the equation, neither can the pattern detection system identify when a head turn is necessary for a driver to be watching the side of the vehicle due to other driver’s poor behaviors.

Fishtree – not your typical learning hub