Belly is a customer loyalty program that offers merchants the ability to deliver customized rewards to their patrons and build lasting customer connections rather than “flash sales”. Belly also provides store owners with powerful business intel via an online dashboard, allowing SMBs to target ads to subsets of their customers, invite lapsed patrons back, or just say thanks for shopping with them. Belly users each carry an individualized white and blue plastic “Belly Card” which they use to earn and redeem points at local vendors through repeat visits. These rewards are determined by each store, giving SMBs total freedom to design rewards programs uniquely designed for their patrons. Belly’s mobile app digitizes the Belly Card and lets smartphone users and Apple Watch wearers access their rewards and check their accounts at will without needing to carry the physical card. Since their launch in 2011, Belly has grown to over 6 million users and 12,000 thousand SMBs.[1]They currently see about 300,000 check-ins per week.[2]

How did Belly bulk up? 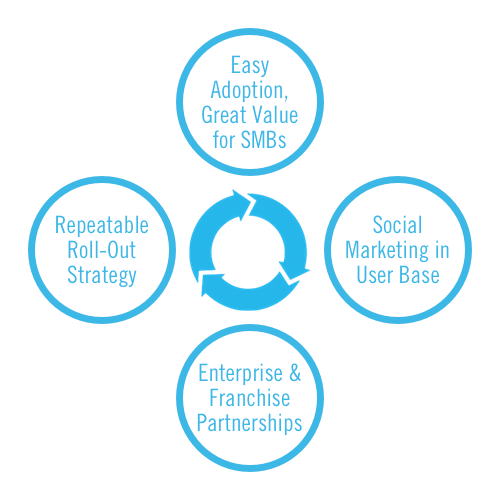 , Belly bulked up by being toned, that is they eschewed the traditional YellowPages model of a fielding a massive (expensive) salesforce in favor of an asset-light, network effect-driven,
organic growth strategy. Wow, that was a lot of buzz words! To do this, Belly made it incredibly easy for SMBs – who traditionally lack the time or manpower for traditional rewards programs – to join the platform and start offering rewards right away. Belly provides stores with everything they need to get up and running: iPads running their software, point-of-purchase marketing materials, the physical Belly Cards, plus a 30-day free trial and sub-$100 monthly subscription plan. This instantly turns every vendor into a new customer acquisition point from which to expand their user base.

Belly seeded the market by signing up 500 Chicago-area merchants at which point localized network effects took over. Specifically, two-sided network effects appeared as customers’ exposure to Belly in stores and word-of-mouth marketing drove user adoption and, consequently, merchant adoption. Word-of-mouth marketing is easier said than done though because who tells all their friends that they say a blue loyalty card in a local store? Belly tackled this by gameifying reward points and facilitating social sharing  through Facebook. Every Belly user’s Facebook feed became an advertising point and local network effects spread through their friend lists, driving further user adoption. Belly touches on four key psychological rewards:

which greatly propels its user growth and generates significant bottom-up demand for Belly at local SMBs.

In the lead up to their pitch at South by Southwest 2012, Belly replicated its Chicago launch by seeding local Austin businesses in and around the convention. This created a visible (albeit nascent) presence for conference attendees to experience both before and after their presentation. What better way to drive adoption than a successful, ongoing, interactive product demo for consumers most interested in innovative products, especially within the hard to crack SMB space? Belly’s success in a locale far from its native Chicago proved the universal validity of its organic, network-driven growth strategy and readied it to expand nationally.

Belly’s expansion is not limited to SMBs; they now also support enterprise clients and national franchise chains. Last year 7-Eleven (who helped lead Belly’s Series B-1 round) launched a Belly rewards program in 2,600 stores across the country. Belly currently has participating vendors in every major US city and entered the Canadian market last year. The Belly platform creates tremendous value for SMBs and their customers. Belly’s affordable subscription pricing scheme allows them to simultaneously capture part of that value, keep out competitors, and sustain phenomenal growth. They won’t be going belly up anytime soon.

Student comments on Get In Ma Belly: How A Little Blue Card Helped Out Mom & Pop