Have you ever felt the frustration of driving down the highway with a freshly filled gas tank only to find out that 2 miles down the road the next gas station had a lower price? Well, GasBuddy is here to help.

GasBuddy uses crowdsourcing to report on local gas station prices. Since the website first launched in 2000, GasBuddy has relied on drivers to update price fluctuations sometimes even daily. Similar to Waze, GasBuddy uses maps to locate all the gas stations and an easy interface allows users to click on the station they wish to update. Other users are able to view the data sorted by distance or price, in a list view or in a map view. 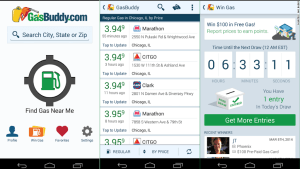 Since 2000, GasBuddy has passed milestone after milestone. In 2013 alone, they recorded 2,491,011 new membership signups, with their total user base surpassing 11 million in October. On June 21, the GasBuddy app passed the 30 million download mark, the same day it accumulated its 125,000th “like” on Facebook.

Nowadays, GasBuddy also gets pricing from stations and credit card agreements, but it is the ongoing updating from users what makes the app valuable for other users. The update method is also very desirable. While it is less appealing, dangerous, and in some states illegal to use your phone while you are in the middle of driving, users update GasBuddy while they are waiting for their tank to be filled.

The app incentivizes people to post gas prices by offering a weekly drawing for a $100 gas card. GasBuddy gives users points every time they post prices. They need to report about six or seven gas prices to be eligible for the drawing. Additionally, they continue to be constantly featured in “the best app” lists across different categories. User base has continued to expand. Though the website, GasBuddy.com, still draws more traffic, the number of users who come to GasBuddy through a mobile device should soon surpass those who experience the brand online.

The app still continues to be free however, not only are they driving revenue through advertising but now they are taking advantage of the data generated by both the app and the website. The media site uses data compiled from GasBuddy.com to create averages and other useful statistical information about gas prices nationally and locally. It allows reporters to quickly gather simple statistics, such as benchmark prices, for use in the media.

So what’s next for the company? Jason Toews, one of the co-founders, would like to see GasBuddy develop into a prediction engine. “We want to alert people ahead of time when gas prices are going up, so we’re working on creating an early warning system for people so they can save,” Toews says. Gas prices may be at an all-time low now but back in 2011 when gas hit a high of $4 per gallon, if you were a driver logging 100 miles per day through your job, a couple of cent difference could make a difference in your bottom line. I predict the data being collected by GasBuddy will only continue to become increasingly important across different industries from gas & oil analysts to logistics firms.

Yelp: An old dog may need a new trick soon

Student comments on GasBuddy: from a friendly gas price whisperer to a data analytics giant