Golf is unique in many ways, but one notable way has been the ability for viewers at home to call-in to each week’s tournament to identify rules violations they observed while watching on TV. Since at least 1987, when a player’s use of a towel to prevent his knees from getting dirty while playing a kneeling shot was identified to be a violation by an at-home viewer, the PGA Tour has been helped – and haunted – by crowdsourced rulings. But the most notable crowdsourced ruling, and the cause for much consternation about the role of the fan in judgment in sport, came in 2013 – to golf’s most famous player, Tiger Woods, at its most famous event, The Masters.

The Tale of Tiger – and Lexi

Near the lead on the second day of the four day Masters tournament, Tiger Woods hit a brilliant shot on the 15th hole. Unfortunately, the shot was too good – it hit the flag stick (roughly 1 inch in diameter) and caromed back into the water in front of the green. As rule 26 – 1 – a states, one of Tiger’s options was to drop as near to the spot where he hit the original shot as possible. However, not wanting to hit the flag stick again, Tiger hit his next shot from 4 feet further back. A former PGA Tour rules official, watching on TV, called in the violation, which ultimately cost Tiger two shots – a penalty which was assessed the next day. Although he remained in contention, Tiger did not win that major, and hasn’t won another major since.[i] 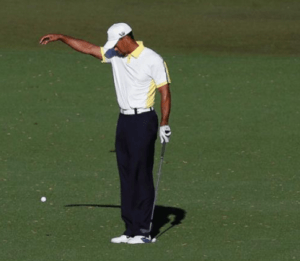 A similar, but more egregious, event happened on the LPGA Tour in 2017. At one of the most important tournaments of the year, Lexi Thompson improperly moved her ball roughly 2 centimeters before putting and was assessed a four-stroke penalty on the next day of the tournament. This penalty dropped her out of the lead, and she ultimately lost a tournament she would have won easily if not for a single viewer’s e-mail.[ii] When the rules official approached her to tell her the news, she reasonably asked “is this a joke?” 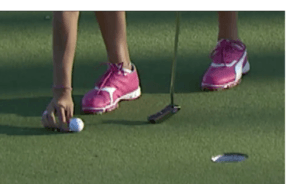 It wasn’t until April 2017 – four years after Tiger’s ruling, and days after Thompson’s – that the United States Golf Association (USGA) responded. Lead rules officials stated that they had no plans to make changes to the ability for viewers to call-in, as those calls added to the accuracy of the rulings. Officials stated they get roughly one call per week, and 90-95% of them are meaningless and duplicate reviews that the officials at the tournament are already doing.[iii] Players were furious, with Tiger tweeting that “viewers at home should not be officials”.

In the months since, the crescendo of frustrated voices continued to rise, and the PGA Tour eventually walked back its comments. Beginning in 2019, viewers will no longer be able to call-in and affect rulings, and instead the Tour will have an official dedicated to reviewing broadcast footage for errors. Specifically, the Tour will:

Reflecting back on the viewer call-in saga, it’s clear that the USGA ultimately reached a better conclusion through this process. According to a strict interpretation of the rules, both Tiger and Lexi committed violations which warranted penalties – and call-in viewers helped to expose this. However, it is also clear that the USGA was too slow to adopt new technology and to stop a frustrating firestorm against rules officials much earlier. When HDTV became clear enough to identify centimeters of movement, the PGA Tour should have either (1) formalized a process for viewers to submit complaints, and publicized this change to players on tour or (2) established an official to watch the tape and seek to identify rules violations that weren’t visible or caught during real-time play. The Tour did neither, and ultimately made inaccurate predictions about never removing call-in viewers that they would change only 8 months later. The rules remain imperfect – because the rules official watching for violations will only watch the TV broadcast, the world’s best players will be exposed to more scrutiny than those that aren’t featured as much on TV. However, this is still a far better outcome than being the only sport with monumental outcomes potentially hinging on a single viewer a thousand miles away. If only they would have realized this change sooner!