Flatiron is tapping into a huge market opportunity. 8 million people die of cancer and 14 million find out they have the disease every year. The cancer drug market itself just hit $100 billion and could jump by 50% in four years according to Forbes. Flatiron Health was founded in 2012, received $130 million from Google Ventures in 2014 and has created an enormous pull-effect momentum over the last 5 months. What is their secret sauce?

Flatiron created a software platform connecting and standardizing cancer centers around the world. There are benefits for each party involved, and the more players join, the bigger the benefits are. Patients can take an active role in their care. Researchers gain access to amount of data never imaginable before. Payers can track the safest and most effective treatments to drive the cost down. Cancer care providers can prove value to patients, payers and referring MDs by transparent sharing of results. Pharma companies can get real-time, objective feedback on the drug efficacy.

The interdependence and mutually beneficial ecosystem is demonstrated in the attached scheme. 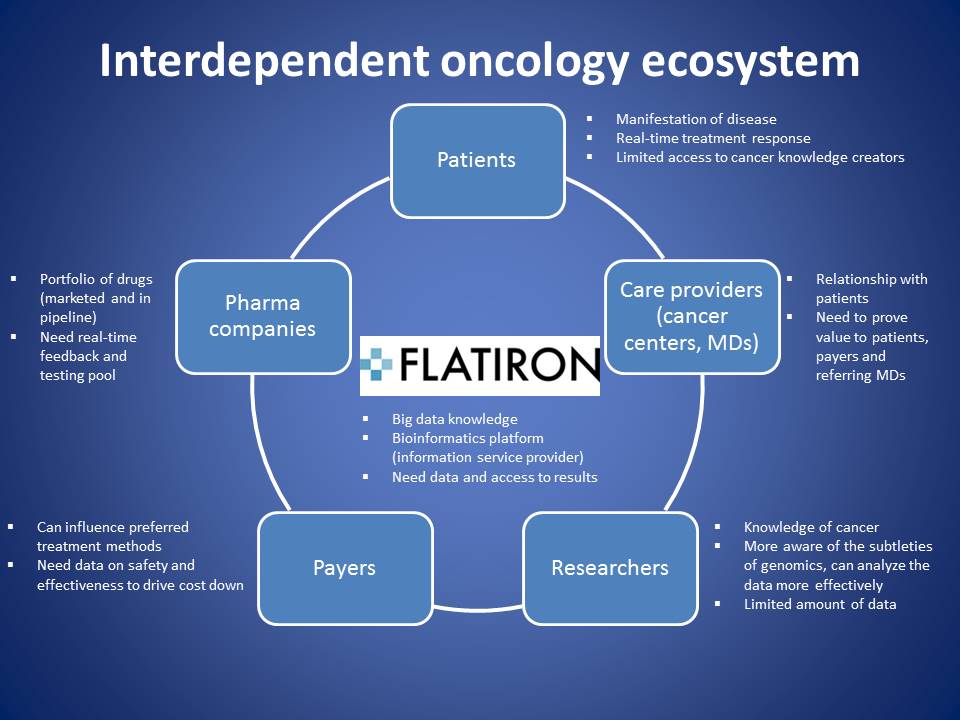 Over the last couple of months, Flatiron has locked into its platform the biggest data players in chemotherapy, radiotherapy and blood cancer diagnostics, thus creating enormous barriers to entry for any potential competitor. On the top, Flatiron unlocked an enormous innovation potential between the individual treatment approaches, with significantly reduced response time and risk.

Flatiron created a partnership to launch novel oncology outcomes database with National Comprehensive Cancer Network (NCCN) in January 2015. NCCN is a non-profit alliance of 26 cancer centers dedicated to improving the quality and effectiveness of care for cancer patients. Great approach, NCCN is considered to be an arbiter of high-quality cancer care. By May 2015, Flatiron has already incorporated NCCN chemotherapy order template into its proprietary OncoEMR®.

Guardant Health cancer blood screening product (Guardant360) was integrated in August 2015. Flatiron can thus access the most time – and cost-effective data collection from both diagnostics and drug therapy results.

Who is losing to Flatiron? The most re-known and big-headed medical institutions

Flatiron opened its platform to various players and took a pro-active role in coaching them to use the platform. On the contrary, the traditional majors, such as Sloan Kething and Mt Sinai’s Icahn Institute took a different approach. These players fought to protect their data, considering themselves to be THE centers of excellence. If you wanted to have access to the data, you could purchase the license for a very high fee. By being over-protective, they are limiting themselves to a dwarf dataset compared to what can (and will be) available in the Flatiron platform.

Flatiron has already developed interfaces for four of the main stakeholders. Negotiations with pharma players are expected in first half of 2016. 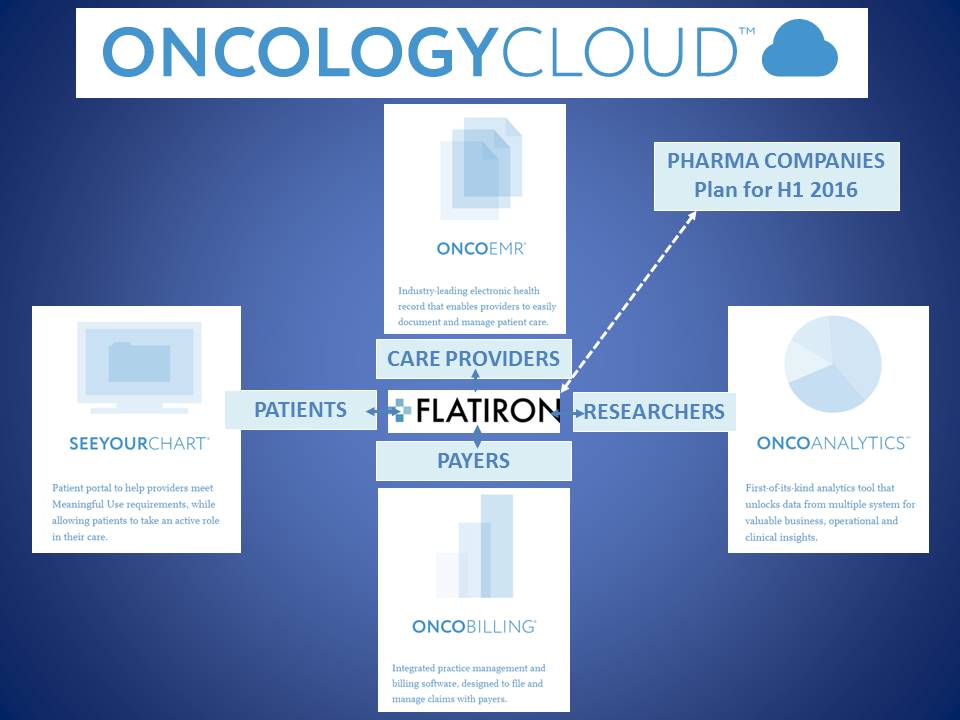 Healthcare is one of the most affected industries by digital and big data disruption. Flatiron Health was founded by two of the founders of Invite Media, an advertising technology company acquired by Google.