The rise of wearable technology began in 1975 when the first calculator watch was launched by Pulsar. Over time wearable technology started to improve. In 2008, Fitbit takes wearable technology to the next level. The company’s CEO James Park has the vision to combine the health conscious trend and technological savvy nature of the millennials together. The result was a big hit and the company went IPO only 7 years after the launch raising $358 million.

Fitbit was able to capture value by providing the customer with the data that they have never seen before. Performance tracking for serious athletes has been around for a very long time. However, for the general population, there is no way to track their performances. At the peak, in July 2015, the company has a market cap of nearly $10 billion. During that time Fitbit owns ~35% of the entire wearable technology market share. Unfortunately, the dream does not last very long. As of today, Fitbit stock price is $5.15. The market cap is sitting at a little over $1 billion. The company value drops by almost 90% in two and a half year.

So how did the company that did so well became a loser?

Despite a very strong start, Fitbit doesn’t have a sustainable competitive advantage. While the idea of using technology to track daily exercise is great, the idea itself was not patentable. Fitbit can only patent its tracking technology. However, it doesn’t take very long until competitors come in and compete. Fitbit faced direct competition from players such as Jawbone, Xiaomi, and Apple. Jawbone entered the market in 2011. The company competes with Fitbit using a similar technology and a more fashionable design. However, the real threat comes in 2014 with the entrance of Xiaomi. The Chinese giant leverage low-cost strategy and conger ~17% of the market share only one year after the launch. Apple also launches the Apple watch in 2015 and immediately steal ~15% of the market share. The market got so competitive that Jawbone went out of business in 2017.

Apple not only competes with Fitbit directly through Apple Watch. The iPhone, as well as other smartphones, are also indirect competitors of Fitbit. All new smartphone models have a tracking capability that allows users to track their exercise. While this function may not be precise it is good enough for many users and further dilute the market share of tracking device focused player such as Fitbit.

Fitbit is now in a very challenging position. Xiaomi overtook the company wearable market leader position in 2017. Apple and Samsung are also very active in both smartwatch and smartphone market stealing market share from Fitbit both directly and indirectly. At the same time, the vitality and the community effect that Fitbit had built is declining. 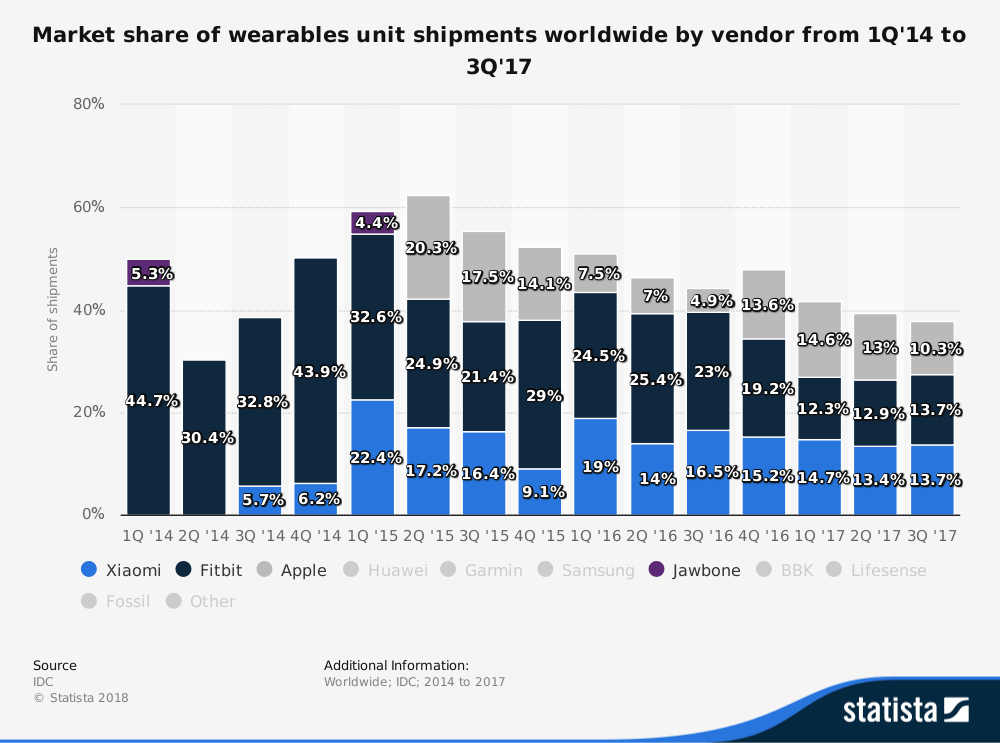 So, is there hope for Fitbit?

The answer is maybe. Fitbit did make some interesting acquisitions over the year. Switch2Health is a startup that develops social wellness health platform. FitStar, another health-related startup focuses on streamlining people workout. Pebble and Vector Watch are startups focusing on wearable technology. It’s up to Fitbit to leverage these startups to gain back market share.

Starbucks: a tech company or your neighborhood coffee shop?

Student comments on Fitbit: From Winner to Loser