FiscalNote is changing the way businesses interact with government using its new Government Relationship Management (GRM) software suite. FiscalNote collects data from hundreds of sources, tracking millions of pieces of legislation and associated comments, staffers and lawmakers [1] in order to reduce the burden of keeping up to date with government actions.  FiscalNote was founded in 2013 with a $1.2 seed funding round and subsequently raised another $30 million in funding through Series A, B, and C rounds.  It has found a way to leverage data and analytics to fundamentally change the way businesses handle regulatory matters, offering unique insights and creating an entirely new product category.

FiscalNote invented the GRM category by automating the process of tracking legislation relevant to a particular business or industry.  Businesses are exposed to legislation and regulatory risk at the state, federal and international level, and keeping track of every development is time consuming and costly.  FiscalNote analyses

legislation proceedings to determine whether a particular law is relevant to a customers’ industry, and can even predict the probability of the law passing with 94% accuracy [2].  FiscalNote can further determine which lawmakers should be engaged with and how, in order to maximize the effectiveness of lobbying spend.    FiscalNote’s machine learning models can also surface legislation which may be significant for a business or industry and alert customers to monitor legislation they were previously unaware of.

Making use of the abundant but messy data available from government sources is a key competitive advantage for FiscalNote, which to date has almost no direct competitors.  FiscalNote continues to refine its predictive models over time given its ever growing database, and hopes to soon achieve 99% accuracy in predicting the outcome of legislation. 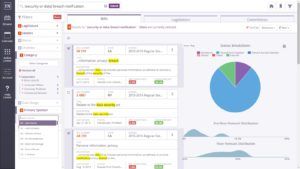 FiscalNote charges a subscription fee to access its web-based SaaS portal, providing users with access to a searchable database of legislation, allowing for customized alerts, analyses and reports.  This legislative guidance is useful for a wide variety of businesses in different industries, and customers include Fortune 500 companies, political action groups and even research institutions [3].  To date, FiscalNote has not released any information regarding its revenue, earnings or even specific customers.  However, FiscalNote has raised capital from prominent venture capital groups and grown to a team of 98 employees.  FiscalNote has expanded beyond its core GRM platform to offer professional services to business, advising on lobbying efforts and other ways for businesses to affect laws they care about.

FiscalNote began as a the brainchild of a small group of engineers during a 10 week hack-a-thon in Silicon Valley, where the first predictive models were developed to forecast the outcome of pending legislative proposals [4].  Collecting, normalizing and updating the vast amount of government data available in the United States was daunting task for the group, but given the technological prowess of other information businesses such as Google, this may not be enough to build a durable competitive advantage over FiscalNote’s potential rivals.   However, FiscalNote has fundamentally changed the way businesses can interact with government, by automating the process of tracking and influencing the outcome of legislative decision making. Concerns have been raised about the prospect of selling software which enables businesses to more effectively influence legislation of importance to them, perhaps at the expense of other stakeholders.  While lobbying has long been standard cost of doing business in many industries, FiscalNote must be careful to navigate the ethical waters of further entrenching powerful incumbents.